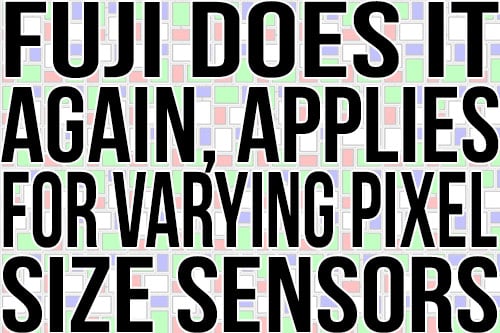 We really love Fuji as a company, aside from taking a really good care of their customers, they are always on the edge of technology, doing things that are ground breaking and innovating.

Fuji’s new patent application for a sensor with varying pixel size may provide better noise handling that what we get with current technology. (And while we value pixel count, it is interesting to see other – non pixel cramming –  places that imaging technology is going).

What’s Up With The Green?

It is quite known that green is a relaxing color, so camera makers tend to stuff double the amount of green pixels in camera sensors vs. red or blue sensors. The human eye is more sensitive to green so today’s sensor technology has half of the pixels in a sensor green. This allows for better green perception and lower “green noise” when pulling data from the sensor. Cambridge in Colour wonderfully explains:

“A Bayer array consists of alternating rows of red-green and green-blue filters. Notice how the Bayer array contains twice as many green as red or blue sensors. Each primary color does not receive an equal fraction of the total area because the human eye is more sensitive to green light than both red and blue light. Redundancy with green pixels produces an image which appears less noisy and has finer detail than could be accomplished if each color were treated equally. This also explains why noise in the green channel is much less than for the other two primary colors.”#

What is Fuji Actually Applying for?

This time, Fuji applies for a new type of sensor, one that has varying pixel sizes depending on colors. This illustration, which is a colored version of the patent application (courtesy of yournewsticker) shows the idea behind the sensor. 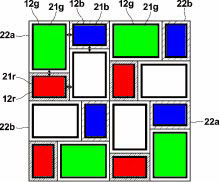 The patent (found at the egami blog and looked at via google translate) describes a sensor with 2 large “pixels” for white and green and two smaller pixels for red and blue. This, per Fuji’s claim will allow better overall noise handling. (and a smaller circuit as a side bonus).

Why I Have My Hopes Up?

Fuji has an impressive track record of innovating sensors, so I think it is reasonable to assume that even if this new tech will not make it into a camera, Fuji’s Engineers are probably working on something that we’ll all want. Here is some back story

About a year ago we learned on Fuji’s Xtrans sensor that used an “irregular” green/red/blue pixel pattern. That pattern removed the need for the Bayer filter ad provided better resolution per pixel count. 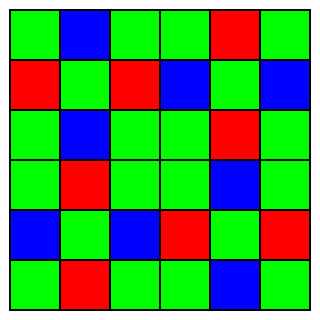 And about a decade and a half ago Fuji developed their superCCD sensor family which used both octagonal shaped pixels and varying size pixel technologies to produce one of the most stunning sensors for the time.

That family of sensors went in the Sx family of camera that were based on Nikon’s analog N80 bodies. I am mentioning this, to show how dedicated and creative Fuji can be when it comes to solving problems (like lacking a digital body). Where there’s a will, there is a way.

Is that new varying sensor tech gonna rock our world? I guess we’ll have to wait to see the first samples. But with Fuji’s long time’s innovation and commitment, I would not be surprised if by the time that we do see those samples, Fuji has a generation two in the patent-works.

How To Build A Varying Power LED Ring Light

How I Wasted $10,000 Plus What I Learned and How It Applies to Business