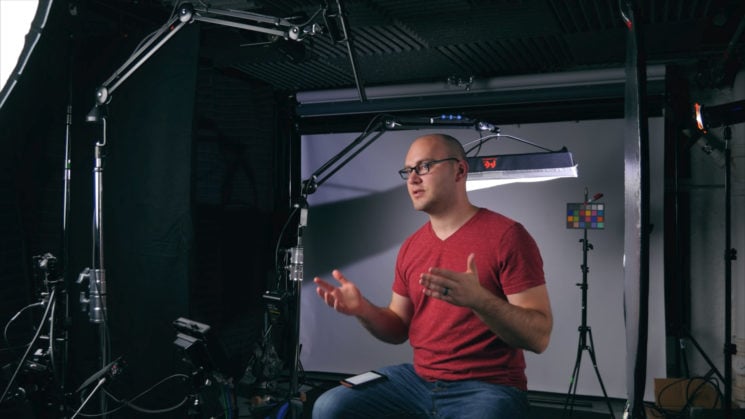 I love these Frankenstein setups for supporting our gear. Whether it’s for cameras, lights, microphones, whatever. It’s rare that a single commercial option offers us everything we need, and sometimes we just have to mix it up. It’s why products like the Manfrotto Magic Arm exist, because a straight up light stand or tripod on its own just doesn’t give us what we want.

In this video, Caleb Pike from DSLR Video Shooter shows off what he calls “the best light stand setup I’ve ever used”. Which is essentially a regular light stand, an articulated microphone boom arm, a ball head, a 1/4″ spigot and a couple of washers & wing nuts. It’s repurposing gear to work in a way it was not originally intended. But work it does, and very well, according to Caleb.

Looking at the pullback shot, you can see that Caleb has at least a couple of these in the studio. One, we can see, is actually being used for a microphone, but the light stand & desk boom arm combination offers a lot more versatility than a simple grip arm. The other holds a lightweight FalconEyes Roll-Flex LED light. Caleb’s setup was a little pricey, largely due to the light stand used. But you could save a lot by using a less expensive stand. Just make sure to weight down the legs.

Caleb uses his for various applications, but often for shooting product b-roll. He can quickly wheel it over to a surface, and point it straight down from above an item for nice soft overhead light.

You will want to be careful what you put on the end of the boom arm, though. Caleb gets away with it here because of the super lightweight FalconEyes LED. You wouldn’t want to try something like this with a big heavy strobe-like light. Remember, they’re designed for microphones, which aren’t exactly heavy.

It’s a very elegant, if unconventional, solution. And it’s a setup I’ve not seen used before, nor thought to try myself. I have a microphone here on my desk on a boom arm. I’ve never once thought “Hey, I should attach a light to this thing for Skype calls”. Yet it seems quite obvious now, and you can bet I’ll be figuring out a way to make it happen.

This tip will save you hours of color matching in photoshop

How to make cheap 2-point lighting setup without lighting gear