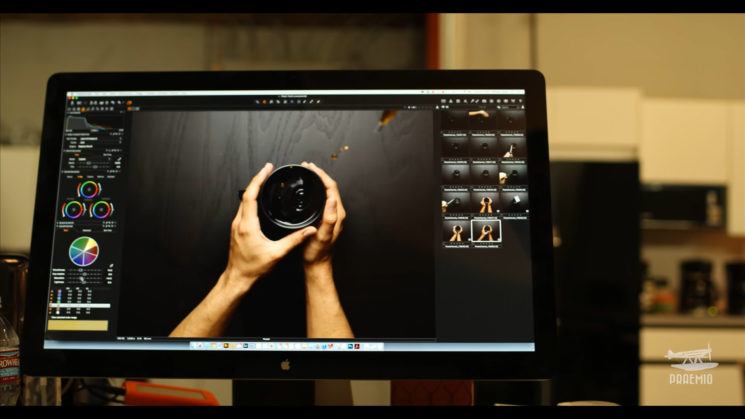 Shooting liquids for commercial clients is no easy task. There’s a lot of experimentation and learning involved to build the skills to get it right. And when mastered, it becomes an art form all of its own.

In this behind the scenes documentary by Praemi we see photographer Bill Cahill shooting an ad campaign for Peet’s Coffees 50th anniversary. Bill makes both stills as well as video as part of the campaign. At one point, he requires 60,000 watts of Mole-Richardson lighting for a slow motion sequence, which results in a melted espresso machine.

The stills were fairly straightforward. Or at least as straightforward as commercial liquid photography gets. Bill says he had about 4 or 5 shots each time “latte art” was poured. Then, they’d have to reset, clean the cups, and start over to try more. Sometimes, each reset only allows a single shot. 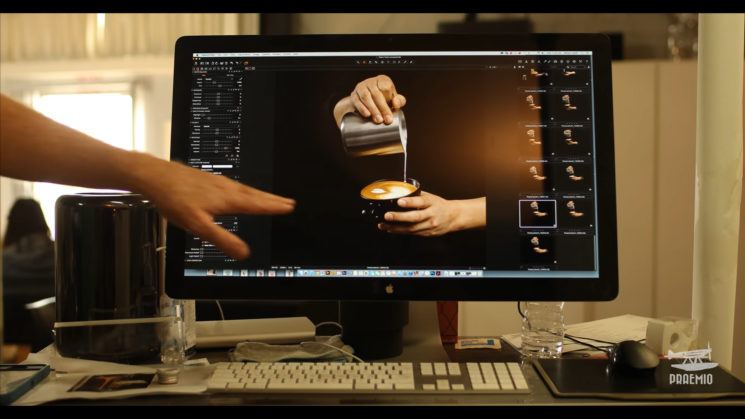 As well as stills, Peet’s wanted 5 video sequences for the campaign. These would be a little more tricky. Shot at a couple of hundred frames per second, you’re talking shutter speeds of at least 1/400th of a second. The lens would also have to be stopped down fairly small to provide enough depth of field. So, very powerful lights were used. Mole-Richardson 12K PARs, to be exact. Five of them. 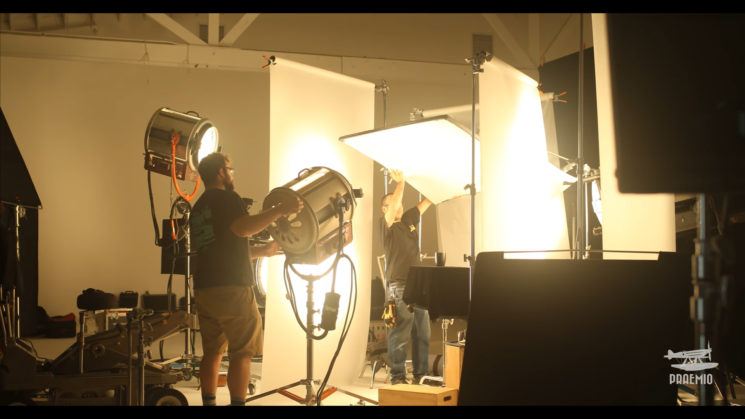 With a total of 60,000 Watts of light, that basically turns the studio into an oven. But the RED Epic held up to the task.

Having that much light makes sense if you’re shooting slow motion. You’re shooting much faster shutter speeds than you normally would for video. And for this subject, he was quite close with a small aperture to get enough depth of field to cover everything. The lights, too, were very close, making for extremely hot subjects.

It was very, very hot. So hot I would get blisters on my fingers from just holding a dropper to drop into the coffee.

We had an espresso machine that had sides of plastic that got melted. It was the hottest set that I’ve ever been on.

You can even see diffraction through the air as a result of the heat in some of the shots in the video. Ultimately, Bill got the needed shots, though, and the client was very happy.

The stills, shot with a Leaf Medium Format digital back, took a little more work to polish than the video. But that usually seems to be the way. The the inherent nature of video usually means that it is a little more forgiving in motion. A single still frame that one can look at for as long as one likes, though, needs to be perfect.

It’s a great insight into what goes on with a high end commercial liquid shoot.

« After a fall in his workshop, this creative builder shows us how he made his own DIY light stands
30 lessons Leonardo da Vinci has taught me about photography, art, and life »