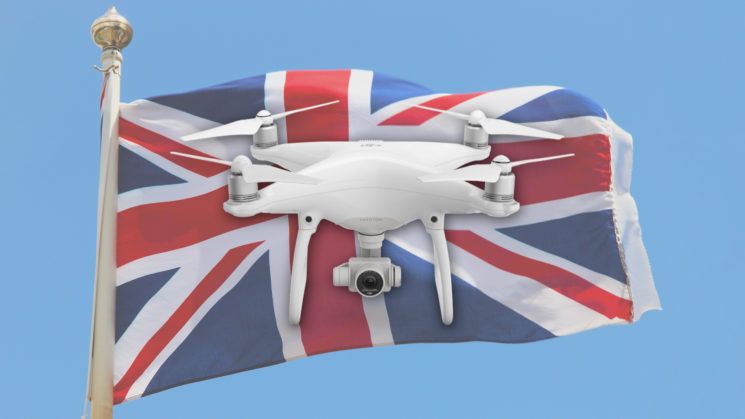 It may have recently been tested and defeated in the American courts, but drone registration is coming to the UK. The government have announced plans to introduce the registration along with “safety awareness courses” for owners of SUAs (Small Unmanned Aircraft). This registration, they say, will be required for anything weighing more than 250g (~8oz).

The BBC report that DJI have weighed in and are in favour of these measures. They have not announced a timeframe, nor plans on exactly how the rules will be enforced. The Department of Transport told the BBC that “the nuts and bolts still have to be ironed out”.

Aviation Minister, Lord Martin Callanan, told the BBC that the measures “prioritise protecting the public while maximising the full potential of drones”. And then there’s a video going on about the 250g weight limit being the limit before putting helicopters at risk.

The BBC state that there has not been a single significant accident in the UK involving a drone. And that there have been several reports of near misses with commercial aircraft and drones delivering drugs into prisons. Well, both of those things are already illegal. A registration system wouldn’t prevent it.

We’re about risk mitigation. We don’t want to stop people enjoying themselves. So, we did some quite extensive safety tests to see what size of drones actually present a risk to aircraft, etc. and 250g was the limit of drones that can present a risk to helicopters

I’m mixed feelings about this. Especially as they still don’t really know how they’re going to implement or enforce it. I don’t mind the idea of registration, in principle, because it’ll put a lot of the idiots off. Of course, even more idiots will simply fly without registering, too. It didn’t seem to stop people doing stupid things with drones while registration was mandatory in the USA. I just think it’s a wasted exercise.

Compulsory “safety awareness tests”, though? If it’s a simple online test where it asks you questions, you enter answers, and it’s a straight pass or fail, then it probably won’t be so bad. But I can’t imagine it’ll be that straightforward. The British Government doesn’t like to make anything that easy these days. It won’t stop people who are going to fly illegally anyway, and it certainly won’t fix stupid.

Even if registration becomes mandatory to purchase a drone, they’re so easy to build. There’s nothing to stop anybody ordering a bunch of parts online and building their own to bypass registration.

The fact is that there are multiple users of the airspace and the public should have access to the air – we firmly believe that – but you need systems to make sure everybody can do it safely.

In all of these issues the question is, where is the reasonable middle ground? Banning drones is unreasonable, having no rules is also unreasonable.

Except, there are rules already.

There are no fly zones. Line of sight is a legal requirement. There’s regulations about maximum altitude, how close you can fly to people, vehicles, roads, and buildings. Registration will not prevent people from breaking the rules that are already in place. I’ve no idea how they think it will prevent them from being broken in the future.

The UK Government have not said whether this will also apply to more traditional model aircraft, such as planes and helicopters.

« Godox are bringing real remote flash to your phones
Total Solar Eclipse is coming next month, this is what it looks like from space »