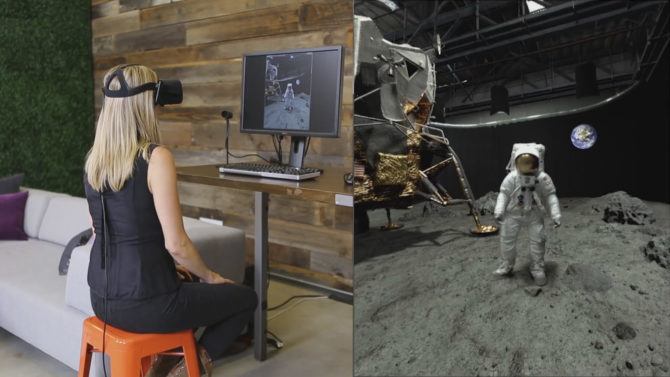 We first mentioned Lytro’s Immerge virtual reality camera last year. Incorporating their light field technology at its core, it has a very unique appearance resembling something more suited to the set of a sci-fi movie. In the original concept video introducing us to Immerge, the demons shown were mockups.

Now, Lytro have released live action VR footage of the system working, and they’re taking us to the moon. One of the technologies that Lytro showed off with its cinema camera was keying out subjects without the need for a green screen. This is also being applied here to separate the foreground from the background.

The three videos released all center around a short film called “Moon”. It features an actor on a soundstage who plays an astronaut descending from a lunar lander. Partway through the scene, he is approached by the director and told to start again. The director is behind the viewer, and turning around lets you see them.

It’s basically a teaser to show off what it can do, and none of the clips released to the public so far are actually in 3D. So, you won’t get to try these out with your own VR headset just yet.

This sequence shows a quick breakdown of how the clip was built up. First, the actor on the sound stage with practical props. Then, adding in the CG landscape and lander, and the background.

It holds exciting possibilities for the future of storytelling in movies. So, it will be interesting to see how the immersiveness of VR affects our perception of that story. Will it make us feel more involved, or will we simply become more distracted by what’s going on around us to focus on the point?

The final clip shows the footage inside Nuke compositing software in 3D, along with the models used in the final video.

As well as the obvious end result of content for us to consume, it opens up a lot of opportunities while filming, too. VR technology is already in use by the likes of ILM. It allows them to see realtime previews of a composited scene while filming on a green screen.

Systems like Lytro Immerge could take this to a whole new level.

It’s a shame that Lytro have removed themselves from the photographic world. I do look forward to seeing what kind of impact they have on cinema, though.

Do you own a Lytro camera? What would you use one of their cinema or VR cameras for? Is VR the best thing that could come to the movies, or do you think it will ruin them? Let us know in the comments.