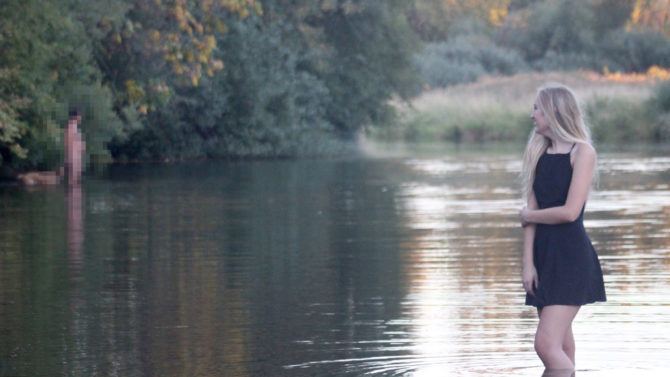 Shooting portraits on location has become very popular over the last few years. Since the demise of train tracks and caution tape, rural middle of nowhere locations now seem to be the go to. They’re much safer, and often far more beautiful. Occasionally, you might see some wildlife. In fact, just last week during a shoot at a nearby river, we were briefly approached by wild deer. Sometimes, you might see something else.

Something else is exactly what photographer Elena Nesbitt and Jillian Henry saw during a recent senior shoot. The seventeen year old Henry was standing in the Willamette River when a naked dogwalker suddenly wandered into the frame. After Henry posted the photos to Twitter, the Internet soon picked up on them.

Henry spoke to Mashable about the incident and says it didn’t really faze her. She told Mashable that they started laughing when they noticed him, and that it’s not uncommon for nudists to roam the Willamette River.

But, he didn’t stick around forever, and they did get some other shots.

Most of my location shoots tend to be nude shoots. Dog walkers are a constant concern, but at least there’s usually an early warning system; The dog. They’re usually not on a lead, and go bounding ahead of their owners (which are almost always wearing clothes). Plenty of advanced notice for my subject to cover up and keep her modesty. I’d never considered the possibility of naked dog walkers on a clothed shoot, though.

What would you have done confronted with such a situation on a shoot? What surprise interruptions have you’ve had during your photo shoots? Let us know and tell us your stories in the comments.

That Moment When a Deer Photobombs Your Baby Shoot