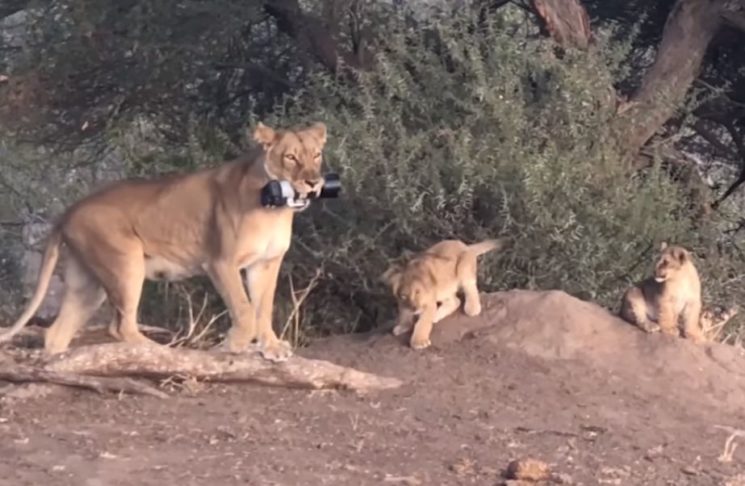 We’ve seen animals snatching cameras before. While penguins, chimps and polar bears took some selfies, this lioness decided to use a pricey camera as a toy for her cubs. It happened when wildlife photographer Barbara Jensen Vorster dropped her camera, and the big cat snatched it and give her little ones something to play with. Luckily, Vorster had a second camera, so she managed to capture the playful bunch dragging $2,600 worth of gear around.

Barbara Jensen Vorster was photographing a pride of lions from her 4×4 in July 2018. One of her cameras slipped from her lap and fell to the floor. As she the thud, the lioness jumped up and moved towards the vehicle, because she wanted to protect her cubs. This caused the exploration party to retreat, in order not to get in danger.

“The camera fell with the lens looking up, she gently flipped the camera on its side and picked it up by the barrel of the lens,” Vorster explains. The animal was carrying it in her mouth for a while and then she handed it over to the cubs. The photographer adds that they “dragged it through the dirt and chewed on the lens hood.” But eventually, “like most kids, they grew tired with their new toy.”

Since the cubs got bored with their new toy, Vorster eventually managed to grab her damaged gear and she paid around $260 for the repair. However, she kept two huge teeth marks on the rubber focus rings of the lens, as well as other teeth marks on the plastic lens hood. I’d definitely do the same, as hardly anything would give the lens more character.

Watching the lions play with the camera kinda makes them look like kittens playing with a yarn ball, doesn’t it? Although, they’ve picked a darn expensive “yarn ball!”

Giant crab steals a $4,000 thermal camera and hides it from researcher