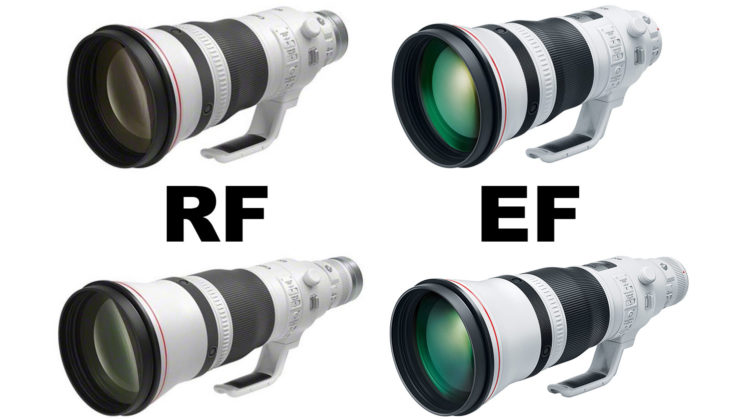 It’s not really all that much of a surprise Canon has some big long RF glass coming, really. Especially not after they’ve spent the last little while killing off their EF mount versions. But two of those upcoming RF lenses are an RF 400mm f/2.8L IS USM and an RF 600mm f/4L IS USM. And now, thanks to Nokishita, we know what they’ll look like because they’ve leaked photos of them both.

Interestingly, they actually look exactly like the EF mount lenses, the Canon EF 400mm f/2.8L IS III USM and EF 600mm f/4L IS III USM, but with silvery EF to RF adapters built-in. If this is all they are, it actually makes them slightly less useful than the lenses they’re replacing.

The Canon RF 400mm f/2.8L IS USM is expected to cost $11,999 when it’s officially announced, which is the same price as the Canon EF 400mm f/2.8L IS III USM lens. When you look at the two lenses side-by-side, the similarities become immediately obvious.

If the images are to be believed and this is indeed what the RF mount 400mm f/2.8 and 600mm f/4 lenses are supposed to look like, then that will be quite surprising. Looking at the specular highlights on the rubber grip of the focus for both pairs images, they’re pretty much identical and only the reflection in the front element is different.

So, perhaps the leak is fake, or perhaps Canon really has just recycled the EF mount lenses, built the EF to RF adapter into them. It wouldn’t be the first time a company’s done this. Sigma did it with most of their Art series primes to make Sony E mount versions before redesigning dedicated mirrorless lenses.

But if this is truly Canon’s decision, then they’ve made them less useful than their predecessors while keeping the price the same. After all, at least with the EF mount lenses, you can still use them on Canon’s entire back catalogue of DSLRs, too. You won’t be able to do that with the new ones if that adapter comes built into the lens.

The Fringer adapters nail focus every time on the Fuji X-T3, even at 11fps with a 600mm lens