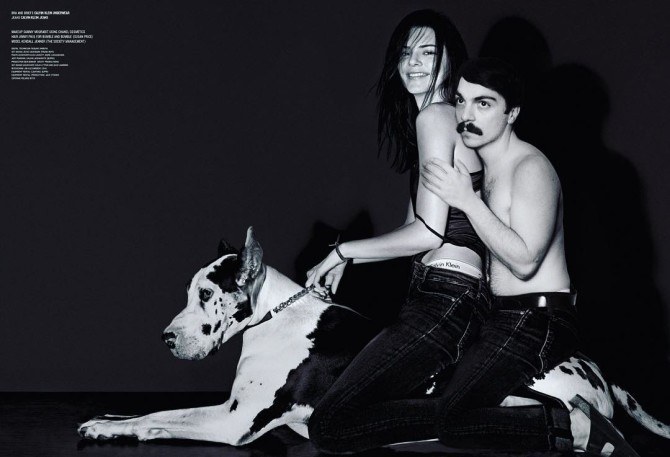 In late summer 2015,  Kirby Jenner emerged in Instagram. By his own testimony, he is the twin brother of Kendall Jenner, their sister model and celebrity star Kim Kardashian. The pictures on the account of the mustached twin brother left no doubt about the authenticity of his story. We have an  exclusive interview with Kirby Jenner which shows some insights on his life as a a brother, which has long been in the shadow of his sister. But not anymore!

First off all: What it’s like to be the never known brother of a celebrity?

Whaddup! Wanna give a quick shout out to my boy Rudolph, who I met at the skatepark in Calabasas when he was visiting town. Dude had the sickest sticker collection on his helmet LOL! Hope you’re still grinding away, bro!!

Anyways, life is tight and I freakin’ love my fam. Sure, they’re famous celebrities and stuff but we all love each other very much. Like, every Friday we have a N64 competition at Kourtney’s house and we always let Kanye win LOL. I’m just super grateful for all the love and support, even if they forget to bring me on vacation sometimes.

We can’t believe that you got cut out from all of Kendalls pics, there must be some real Photoshop cracks in this model business, the pictures without you are looking almost real!  Do you know anything about how they did this?

I actually tried downloading Photoshop once, but gave up and ended up making some cool graphic art in Microsoft Paint. I had a blast! I definitely don’t know much about computers, but that’s def my favorite app. Also, John Stamos turned my standing desk into a drum set and smashed my laptop with his drumsticks! Ugh, Stamos! That dude seriously breaks all my stuff whenever we hang out haha. He’s still pretty fun though. But I don’t really like computers or sitting much so I like to describe myself as “adventurous.” I drink WAY to many energy drinks to spend time at a desk.

How do you feel about being cropped out of all these pictures?

Yeah, sometimes I get bummed when I get cropped out, but then I just hit up CVS pharmacy and get myself some candy! Candy fixes everything (expect for bloody noses…I tried LOL!!!) Honestly though… I kinda suspect this dude on Kendall’s team named Mario keeps photoshopping me out because I accidentally hit him with my drone LOL! Oops! I told him to duck but I guess he had his meditation tapes on and didn’t hear me. idk. But also, that’s just the way this industry works, you know? And I’ve got model gigs of my own, and plenty of other cool things on my plate, so getting cropped out is never the end of the world.

Are you happy to get all the fame you deserve finally?

Well last Thursday, I got to cut the line at Hometown Buffet! It was amazing because they had just opened so everything was super fresh! Other than that, life is pretty much the same.

Do people recognizing you in the streets now and ask you for selfies?

This morning I was playing Jenga in the street outside my house and our mean neighbor-lady, old Mrs. Darvish, started yelling at me to get out of the road. BUT, she actually called me by my real name instead of just calling me ’Mustache Boy.’ I was stoked! Mrs. Darvish is a nasty old woman but I know that she probably has a good heart underneath that muumuu dress. She just needs to remember that love is real and I guess I’ll have to be the one that reminds her.

Do you have a lot of pictures left where „the business“ cropped you out? What I mean is, do you want to keep going publishing the original images of you and Kendall? You got a lot of fans for that…

Haha oh man, I went on a safari with Kendall & Kylie last October and we all took the BEST pics. So definitely be on the lookout for those on Insta. There’s this one where a monkey stole Kylie’s sunglasses and put them on Kendall’s head LOL!!! We seriously cried with laughter. Then I got shot in the leg by accident by some local hunter dude and I passed out for a while. So I don’t remember much after that… but there are pics of that too.

I’ve also got some pics of me in my karate uniform. I look super tough and cool in them so I’ll definitely share those eventually.

You gathered more than 200k followers on Instagram in half a year. Do you think that’s only possible because your twin sister is famous?

Is that a lot? I actually think I get most of my followers from my belly flop competitions and funny dance moves. I also go to Dave & Busters pretty often and people sometimes crowd around me when I get a high score on skeeball. That’s probably where they come from, right?

Why did you decide to go on Instagram and start publishing all these pictures so late?

I had a flip phone for like…15 years! I might’ve actually been the first person to get a flip phone and the last person to get rid of it LOL! But in all seriousness, I had such a high score on ‘Snake’ and didn’t want to lose it. Once I got a new phone, I learned about the internet and websites and went from being a 90s kid to a millennial. We all gotta grow up sometime, ya know? But now it’s cool because me and my fam can all chat online and continue all of our funny inside jokes.

The real pictures show that you are typical twins, you are doing a lot of stuff together, hang out all day, have nothing but fun. Is this real or are you also annoying each other from time to time like just regular siblings?

Kendall and I freakin love each other LOL. I’ve been letting her win at our fake karaoke competition, because I’d do anything for her. And she usually lets me win at “Score a Basket” which is pretty much basketball but kinda different. Once, when we were 8, I tricked her to “look over there!” and I stole one of her chicken nuggets and she started crying and it was the worst I’ve ever felt. We took a blood vow right then and there in the McDonald’s play pen to never get mad at each other again. And we’ll never, ever break it. For real.

You look like a really manly guy, keeping up with legends like Burt Reynolds or Tom Selleck. Are you a guy like this or is there a soft core inside?

Whoa, thanks! This mustache is actually kind of an accident, but it’s a really long story. It was supposed to be a beard but some things went horribly wrong. And I guess I’m just like my favorite candy…I’ve got a soft gooey core on the inside LOL! But let’s just keep that between us, okay? I don’t want people trying to eat me.

You are part of the well known Jenner clan, your sisters are a models, your half sisters are big players in the fashion industry and great actresses – Kim got the Golden Raspberry two times!! – some of them are married to sports and pop stars like Kanye West – but what are you doing for a living?

Oh, I win lots of contests and compete in all sorts of competitions! Last summer I won $100 from a sweepstakes and it was insane! I’m also working hard on my rollerblading career and have been doing some modeling. And, I’m also almost finished developing my new app, which delivers freshly grilled hamburgers & hotdogs to your front door. It’s going to be huge! Can you imagine how dope it would be if you were hungry but too tired to get up so you just ordered hamburgers & hotdogs? So dope!!

What’s your plan for the future?

I’ll probably watch more Animal Planet. Maybe take a nap. Maybe play Fifa with Carl from The Walking Dead. Other than that, I have this fantasy that when I’m like 78 years old, I move to the Alaskan outback and learn to live off the land. It’s kinda crazy, but dreamers gotta dream!

Thank you very much for the interview