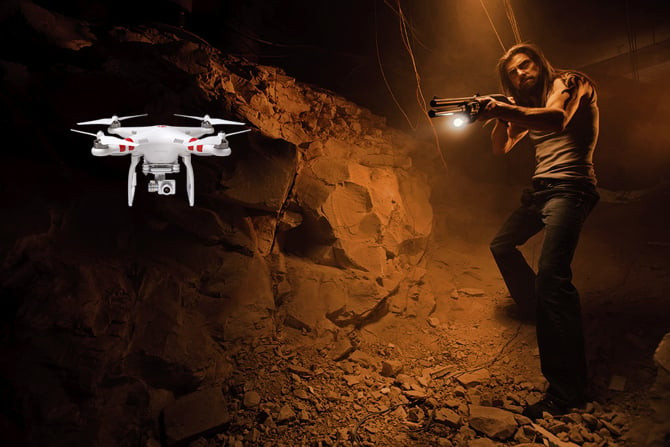 Several months ago we reported that William Merideth of Kentucky was arrested and charged with first degree wanton endangerment and criminal mischief after firing his neighbor’s drone out of the sky with a shotgun.

Based on the fact that the drone was shot over Merideth’s property and that eyewitnesses said the drone was flying low, a Bullitt County District Court judge decided to dismiss all charges against him.

So can anyone go shooting drones from now on?

Merideth’s court hearing began on Monday and it took the judge all of two hours to drop the charges.

Claiming that his neighbor and drone operator David Boggs was invading his privacy and spying on his family by having the drone hover at low altitude over his property, Merideth said he was in his right to protect his family and his property. “Was it handled the right way, I don’t think so but justice came out in the end,” he added.

When asked by Merideth’s attorney if he “chose to allow that drone to hover over some of those people’s property”, Boggs said that is not true. During his testimony, Boggs also mentioned that flight data proved the drone was flying much higher than Merideth claimed.

Unfortunately the drone’s memory card, which could have settled this matter, was never found and the shooter denied having any knowledge of what had happened to it.

Deciding to ignore or not believe Boggs’ flight data, Judge Rebecca ward ruled it was an invasion of privacy since two witnesses said they saw the drone below the tree line.

“He had a right to shoot at this drone, and I’m gonna dismiss this charge,” the judge concluded.

“The next time something like this happens, they’re gonna refer to it,” Merideth said after the ruling. “Now I don’t encourage people to just go out and start blasting stuff for no reason – but three times in one day, three times over the course of a year, six times total, over one property? That’s not right, that’s harassment.”

Boggs declined WDRB’s request for an on camera interview, but said he will push the Commonwealth of Kentucky Attorney’s office to take the case to the grand jury.

Despite their less-than-affectionate attitude towards drones I’m not sure the authorities will be too pleased with this ruling and with the court basically allowing guns to be fired in neighborhoods, so I’m not sure we’ve seen the end of this case just quite yet.

WDRB added that a drone harassment bill was pre-filed last week by state representative Diane St. Onge, ahead of the 2016 session, aiming to drastically limit the use of drones.

According to the bill, a person will be guilty of drone harassment when they hover over or land on another person’s property with intent to intimidate, harass, annoy or alarm another person.

Using a drone in a way that alarms or seriously annoys said other person with “no legitimate purpose” will also be considered drone harassment.

It will be interesting to see what happens if the recent ruling remains and the bill passes. Will Kentucky drones be freely shot out of the sky by neighbors who were “seriously annoyed” and believed the drone operator had “no legitimate purpose” to be flying in public or high above their property?

Perhaps citizens will call local police armed with the DroneDefender to put an end to the pesky drone?

California Governor Jerry Brown recently made paparazzi drones illegal by signing bill AB 856 expanding privacy protections by changing the definition of a “physical invasion of privacy” to include a drone invading the airspace above private property in order to record video, sound or capture photographs.

Homeowner Shoots Invading Drone Out of the Sky