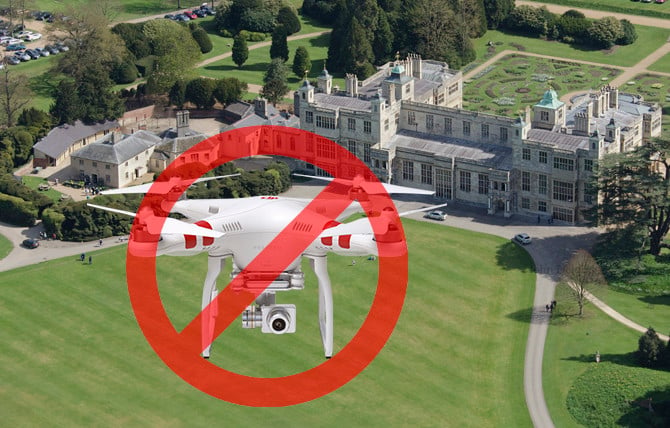 Bill AB 856 expands privacy protections by changing the definition of a “physical invasion of privacy” to include a drone invading the airspace above private property in order to record video, sound or capture photographs.

“We learned that the paparazzi have used drones for years to invade the privacy and capture pictures of public persons in their most private of activities — despite existing law,” said Assemblyman Ian Calderon who wrote the legislation.

According to the bill, the fines collected will be divided equally between the prosecuting agency and the Arts and Entertainment Fund.

While many might not be happy with the new law, it seems pretty fair to me. After all it doesn’t prevent drones from entering the airspace above private property; it just bans drone operators from documenting what’s going on beneath them, on other peoples’ land.

In fact, just last month Brown vetoed a proposal that would make flying over private property without permission a trespassing violation.

In his veto message he explained that while the bill is “well intentioned”, it “could expose the occasional hobbyist and the FAA-approved commercial user alike to burdensome litigation and new causes of action.”

The three bills Brown rejected a few days ago attempted to prohibit civilians from flying drones over wildfires, schools, prisons and jails.

In the case of wildfires, the bill suggested a $5,000 fine and up to six months in jail for violators. In addition, emergency responders would be allowed to knock the drones out of the sky with electronic signal-jamming devices.

As we’ve seen, drones over wildfires can be a big problem.

The proposed ban to fly over school intended to prevent photos being taken of students and the jail/prison bill was directed at stopping contraband from being dropped into the facilities.

The reason Brown rejected these bills, as well as six others, wasn’t his support of these actions but rather the fact that they are already banned.

“Each of these bills creates a new crime — usually by finding a novel way to characterize and criminalize conduct that is already proscribed,” Brown explained. “This multiplication and particularization of criminal behavior creates increasing complexity without commensurate benefit.”

The Governor went on saying that the state’s criminal code has grown to include more than 5,000 provisions in recent decades, “covering every conceivable form of human misbehavior.”

“During the same period, our jail and prison populations have exploded. Before we keep going down this road, I think we should pause and reflect how our system of criminal justice could be made more human, more just and more cost-effective,” he concluded.

In case you were wondering, some of the other bills rejected would deal with allowing explosions in drug labs, using bullhooks to handle elephants and removing GPS tracking devices from paroled sex offenders.

This isn’t something I say often, and admittedly I’m not very involved in California politics, but it seems like this politician actually knows what he’s doing.

Bill AB 856, now a law, can be viewed here. The digest is presented below:

Under existing law, except as specified, a person is liable for physical invasion of privacy when that person knowingly enters onto the land of another person without permission or otherwise trespasses to capture any type of visual image, sound recording, or other physical impression of a person engaging in a private, personal, or familial activity and the invasion occurs in a manner that is offensive to a reasonable person. Under existing law, a person is liable for constructive invasion of privacy for the same activity, as specified, through the use of any device, regardless of whether there is a physical trespass. Existing law subjects a person who commits physical or constructive invasion of privacy to specified damages and civil fines.

This bill would expand liability for physical invasion of privacy to additionally include a person knowingly entering into the airspace above the land of another person without permission, as provided.

[via Los Angeles Times | Lead image based on a photo by John Fielding (it’s an illustraion, the actual photo was takne from a plane)]