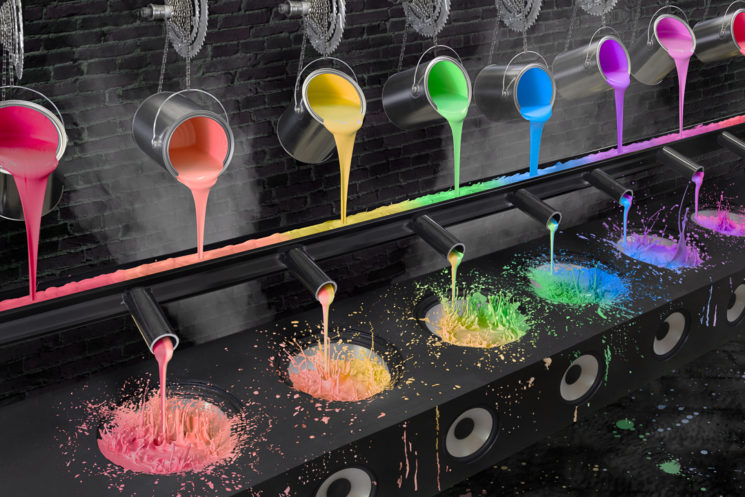 Photographer Steve Kazemir has shared some of his amazing work with us before. He often takes water or paint splash photos, and even builds automatic setups for them. Once again, he has created a stunning image using a simple setup, some Home Depot items, and a lot of time and patience. After 500 photos and around 70 hours, Steve created this fun “Paint Splatter Factory.” And this series of videos, he shares the entire process with you.

Steve explains that he took around 500 photos to compose this image. He ended up using 60 of them to create the final image. Even though his setup was simple, the entire process was very time-consuming. Steve says that it took him between 60 and 70 hours to complete the image, and he spent half of that time setting up and shooting, and a half in Photoshop.

Like many great ideas, this one came to Steve while he was drifting into sleep. He remembered a poster he saw back in college, and he thought about how he could create something with a similar concept, but in his own way. He made a mockup in Photoshop to get an idea of how he should set everything up, and then he went on to building his rig.

For setting up the shot, Steve only used one can of paint and an empty bucket and poured the paint back and forth between buckets for each of the photos. He built a pretty simple frame for the buckets using a few wooden boards, and he added a black DIY backdrop behind it. He also used a black poster board to place behind cans so he could cut them out more easily in Photoshop.

Steve added two empty cans hanging from the wooden frame with a speaker and a trough below them. He changed their position and tilt and took a bunch of photos that he would combine later. For the lighting, he left the garage lights on, but he also used a Yongnuo YN560 IV and a Yongnuo YN560 III speedlights with umbrellas.

After taking his photos, it was Photoshop time. To makes things simpler, Steve created one file for the row of speakers, one for the cans, and one for the trough. This way, he didn’t have to work with a gazillion layers when assembling the image later and adding the paint.

For the second set of images, Steve needed to shoot paint pouring into a bucket. As I mentioned, he used the same two buckets, and he tweaked the colors later in Photoshop. You’ll see more about this process in video number two:

Once he was happy with the paint pouring photos, he changed the colors and added the paint cans to the other three elements. Since the background was white and flat, he added a photo of a brick wall that he took a few years back.

Next, Steve had to take photos of the trough pipes that let the paint through in the final image. So, back to the garage! He placed the pipes in different positions and took photos, and then added them to the main files in Photoshop. To make the paint pouring out of the pipes, he made a different DIY setup. He used a piece of cardboard to make a funnel, put it on a chair, and photographed the paint stream as he poured the paint through the funnel. And then – more Photoshop. Other than adding the pouring paint in, he also added a bit of smoke in Photoshop to make the image more “factory-like” and less flat.

And now here’s what I find to be the most fun part: speaker paint splash. Steve already showed us his process here, and he used the same approach again. He placed a garbage bag on the speaker and played the sound to make the paint “jump” and create splashes. If you attempt this, remember to use a smooth garbage bag as those with texture are a pain to edit in Photoshop. Steve learned it the hard way, but he still managed to photoshop the paint splash into the speakers.

Steve then photographed gears and chains to add them to the image. He also shot the speakers again so he could add more cones. Finally, he photographed the paint in the trough and photoshopped that in. You’ll find way more in Steve’s third and final video of the series:

Steve says that it would probably take him less time if he hadn’t experimented, but knew exactly what he was doing. But I’m always up for experimenting, making some mistakes, and learning through them. After all, the result is pretty awesome and I’m sure all this effort was a time well spent.