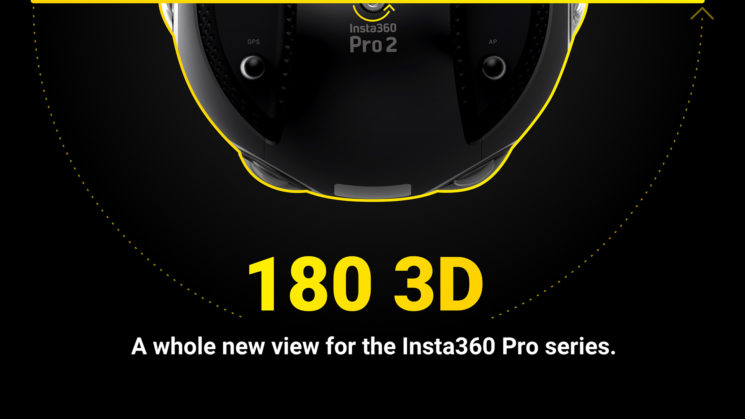 The upgrade will come as a free software update for both the Insta360 Stitcher software as well as Insta360’s integrated editing extension for Adobe Premiere Pro CC.

The way it works is that using the new 180° 3D feature, Insta360 Pro and Pro 2 users will be able to isolate the footage captured by just the lenses required for 180° 3D footage. So, you’re still shooting 360° footage, but you’re only taking what’s necessary for stereo 180° footage. This footage can then be used to create high quality stereoscopic 180 video for playing back in a VR headset at up to 4x4K resolution per eye.

The workflow in the Insta360 Stitcher application sounds very straightforward. It’s a simple toggle switch on or off when importing your footage into the software. When toggled off, the software pulls in the files 360° the way it’s always done. When it’s toggled on, you just get those required files for 180° 3D video.

For Premiere Pro CC the new functionality has been added into Insta360’s “No-Stitch Editing” extension, with a 180° workflow that they say is just as easy as their 360° one. Import, and edit on a proxy version of the video so you can see how the finish result will look without having to waste resources stitching clips you won’t use.

Once you’ve finished editing, it only processes those clips that made it into your final sequence. You don’t even need to decide whether it’s 360° or 180° until it comes time to export out the final video.

I have to admit, the whole idea of 180° 3D video has gotten me a lot more excited over the last few months than 360° ever has. Sometimes you don’t want to be up and turning around walking into walls or furniture to consume content. Sometimes you just want to sit back and relax and not really care about what’s going on behind you.

I think the Insta360 Pro and Pro 2 are, almost certainly, overkill for my needs, but I hope Insta360 release a consumer level 180° 3D camera at some point. Especially if it can bring the level of quality we’re seeing out of the Insta360 ONE X samples.

But for Insta360 Pro and Pro 2 users, I do think this is pretty cool that it’s just a software update. It means you’ll probably be able to do this on footage you already shot weeks or months ago.