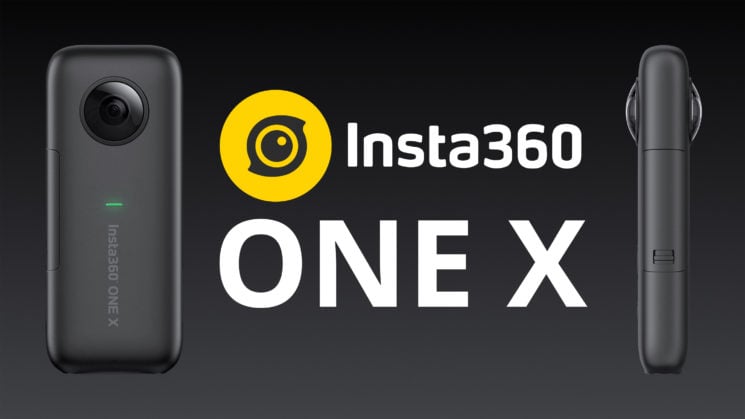 Insta360 has a reputation for producing some pretty fantastic 360 cameras. The Nano S for iPhones has proven to be particularly popular. But it left Android users asking “What about us?”. So along came the Insta360 ONE, which works with both iOS and Android. Today, though, Insta360 has announced the new Insta360 ONE X.

The new Insta360 ONE X bumps up the 4K resolution of its predecessor to 5.7K and adds new FlowState Stabilisation for smooth, rock-steady footage. It also offers 4K 360 video at up to 50 frames per second, and 3K at 100 frames per second.

Insta360 says that the ONE X is a “new kind of action camera”. Pitching it towards more extreme action pursuits rather than activities where one might normally use a 360 camera. They’re taking square aim at the GoPro Hero 7 and similar action cameras.

This is why the big focus on the ONE X is the new FlowState Stabilisation. They say that it’s “Like a gimbal. Without the gimbal”, which sounds pretty awesome. 360 cameras are notoriously difficult to use with gimbals due to the fact that most gimbals aren’t really built for them. And the ones that can handle them are often so big that they’re easily seen in the shot.

The new FlowState tech, Insta360 says, allows users to capture “impossibly smooth” footage without any accessories required. Whether it’s on a selfie stick, a helmet cam or mounted directly to something like a kayak, snowboard or motorcycle, it should, in theory, still produce smooth and stable footage. And judging from the teaser video above that they posted to their YouTube channel a couple of weeks ago, it would seem to live up to the claim.

Stabilisation aside, the ONE X offers a very respectable 5.7K resolution. This is the same resolution as the YI 360 VR, although the ONE X uses much newer technology and it has a new HDR video mode for maximum dynamic range. So, it will be interesting to see how the two compare side-by-side. The ONE X also offers something else that the YI 360 VR does not, though. 50fps 4K resolution video and 100fps 3K. So now you can get that smooth slow motion 360 footage.

To keep up with its new active lifestyle, various accessories and cases are available for the ONE X, including an underwater dive case, an aerodynamic “dart” style case (they call it the Drifter), and a protective case for general adventure. 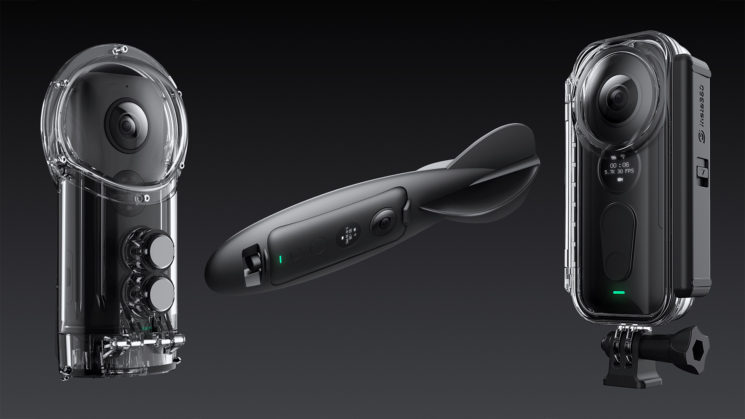 It’s a great range of cases, covering many of the scenarios in which extreme action junkies might find themselves. You might want to be careful if you’re travelling by plane with that one in the middle, though. There are also dual battery charger and GPS Smart Remote accessories available for the ONE X. 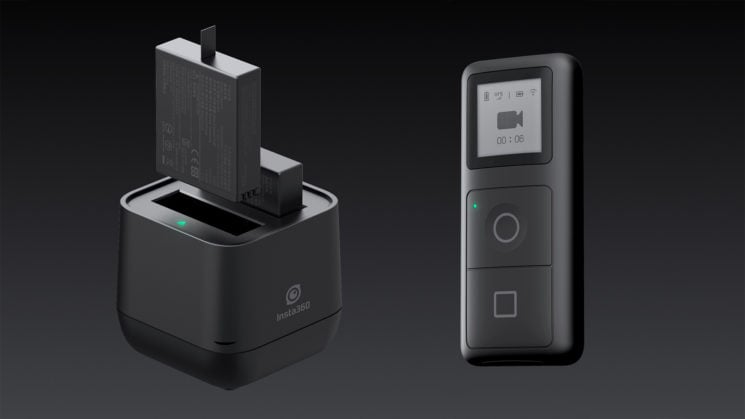 As usual, the Insta360 desktop software and mobile apps allow you to do quite a lot with the footage the new camera creates. As well as all the usual features of the past, we also now see time travel capabilities. Sort of. It features a new TimeShift feature that allows you to ramp the speed up and down at will throughout a sequence. You can speed sequences up for hyperlapse and zippy transitions or slow down with some silky smooth slow mo.

Looking at the specs and samples so far, it looks to be the next step up in consumer level action cameras. And to get this sort of capability for a similar price to the GoPro Hero 7 is also pretty impressive.

The Insta360 ONE X is available to pre-order now for $399 and shipping begins on October 17th. If you want to find out more about the ONE X, head on over to the Insta360 website.

« Instagram expands AI to photo content in campaign against online bullying
iPhone XS vs. cinema Camera – Can you spot the difference? »