There are so many ways to set up an overhead camera rig, but many of them involve building some sort of structure, lugging around heavy C-Stands or drilling holes into walls.

When photographer Daniel Shiffer was looking at overhead rigs, none of these solutions worked for him. He needed something portable that he could just throw in the back of the car and set up or break down at a moment’s notice. So, he turned to a desktop computer monitor stand.

Using a TV or monitor mount for an overhead camera rig isn’t a new idea. Typically, however, the mounts often suggested bolt into the wall. So, they’re not very portable. Daniel found one that clamps onto the edge of a desk or table and the monitor mount can actually be removed, revealing a stud to attach a 3/8″-16 adapter onto which you can screw on a ball head. 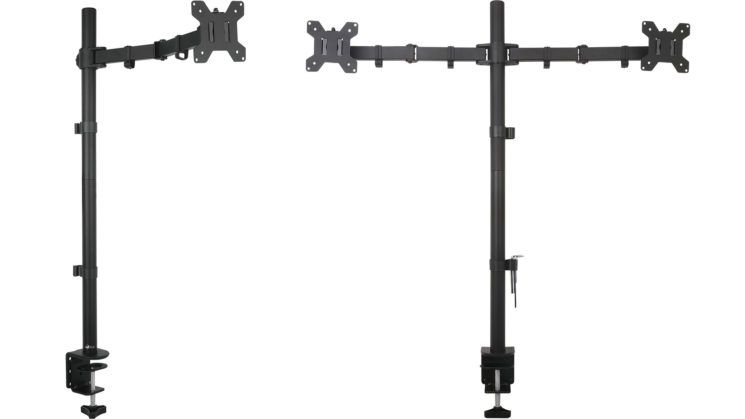 It’s sold on Amazon US as the WALI Extra Tall monitor stand. And it comes in single ($41.99), dual ($49.99), triple ($45.49) or quad ($49.99) flavours. Daniel uses the single mount version in his video, although the dual mount version could be very handy for attaching lights, a microphone, a monitor or other devices to the second arm.

Daniel uses a small clamp to attach a monitor to his single arm stand, but for larger screens, the dual arm version might work better. Given the strange price disparity between the four versions, it might even be worth getting the quad version. If you’re shooting a tutorial, for example, you could use the extra arms to attach notes and a script.

There are, of course, other monitor stands out there, but this one is really tall, allowing you to get the camera up out of your way and zoom in a little to fill the frame with the surface below. This will help to prevent weird perspective issues caused by having a wider angle closer to the table. It’s also really easy to remove the VESA plate to reveal that stud as well. Other mounts may require the use of drills or other power tools to modify them.

If you’ve been looking for a way to set up a quick and simple portable overhead camera rig, this could be the ideal solution.