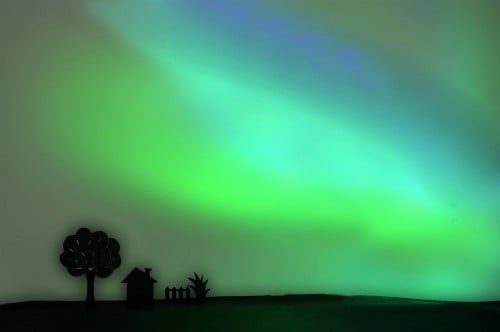 I always wanted to shoot the Aurora (Northern Lights) . It has been a long-time subject on my to-shoot list. Sadly, as time went by, I realized that I would either have to wait till I am older and have fewer commitments and can take the travel or forgo that project all together.

I regained hope when photographer Bhaskar Dutta sent in a tutorial on how to recreate the Aurora using nothing more than paper and some LEDS.

An aurora is a natural light display in the sky particularly in the high latitude (Arctic and Antarctic) regions, caused by the collision of energetic charged particles with atoms in the high altitude atmosphere. It presents a beautiful display of colours in the sky. Here’s a simple method that I tried to recreate similar effect in a photograph using LED lights. 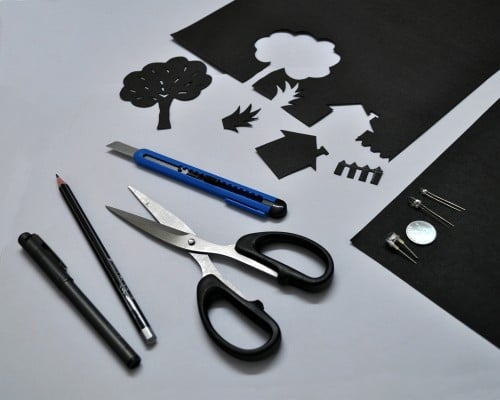 Sketch the objects you need to keep in your frame on a black chart paper. Cut out the standees that you would require for the frame using a paper cutting knife or scissors. Black Chart papers are good to use as they give a feeling of silhouettes. Once the standees are ready, place them against a white or light coloured wall and the rest of chart paper may be used as ground in front of the standees.

Place your camera on a tripod or onto a firm surface such that it doesn’t move. Put the mode dial to M (Manual) Mode and set the shutter to “Bulb”. Aperture may be varied according to requirement. I had used f/2.8. Focus lock on the standees and put the lens to manual focus so that it doesn’t spin back and forth during the actual shot. Use a remote or the timer option to release shutter and close it.

Put off any bright light source in the room. A dim light is enough to carry on with the activities after the shuter is released. Now that the set up is ready, take the LED bulbs with a coin battery between its fangs and move the light on the wall. Make sure, the bulb is not visible in the frame else, it will give an effect of light streaks. It is desirable to only have the lights seen on the wall and not the bulbs. Keep moving it for enough time so as to get the desired effect of aurora. The above image took close to 2 mins of open shutter.

Once you are satisfied with the output, you may process it for colour adjustments. Alternately, a straight from cam image also looks quite good!

Hope you would enjoy the technique! Post to the DIYP pool if you made one.