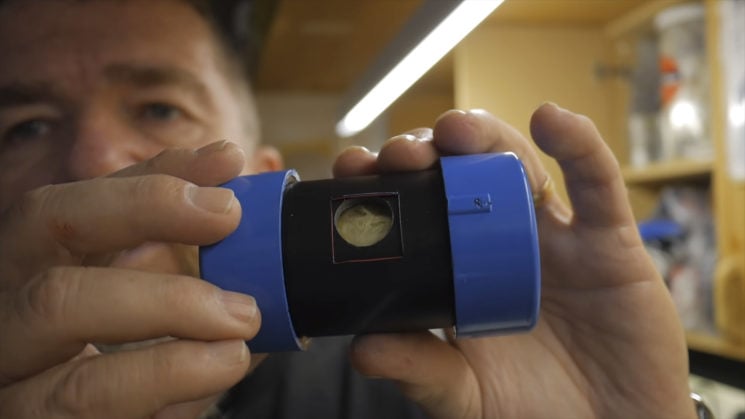 Pinhole cameras are about as old as photography gets. They’re such a simple and basic concept that’s withstood the test of time and are still very popular today. While many modern photographers opt to get a pinhole body cap for their DSLR or mirrorless, it’s easy enough to make your own. In fact, there are many different ways to make one.

I’ve been following YouTuber Joe Van Cleave for a while now. And in between the typewriter and office supply videos, he puts out some great analogue photography content. Some of it covers photographic technique, sometimes it’s a new camera he’s just bought, and occasionally it’s something he’s built himself. And that’s what he’s done here, with these medium format PVC pipe pinhole cameras.

Joe decided to have a go at building several of these after rediscovering a set of old pinhole cameras he made from 35mm film canisters. The principle is basically identical, just scaled up to fit 6x6cm film instead of 35mm. It’s a cylinder, with a pinhole on one side, and a piece of film or direct positive paper inside on the opposite side.

After a little experimentation, Joe found that inch and a half diameter PCV pipe would fit his needs the best for this project. This lets him cover almost exactly one half of the inside of the pipe, offering a nice wide field of view. When buying more pipe, though, the minimum length it could obtain was 5ft long. With each camera only needing to be a few inches long, he managed to cut 18 pieces out of it. 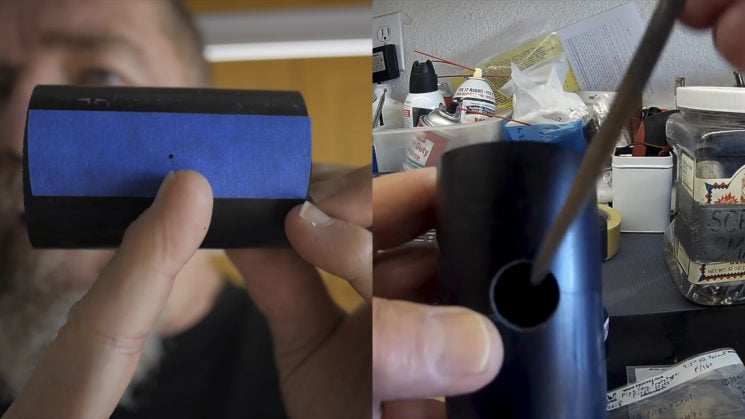 After measuring out the centre mark on one piece, Joe drilled a small pilot hole using his drill press and then bored it with a 5/8″ Forstner bit. Having a large opening like this means that when a piece of thin metal is added with a pinhole, the depth of the plastic isn’t going to be interfering with the shot. If you just drilled a tiny hole straight through the plastic as your pinhole, the film would pick up virtually nothing. 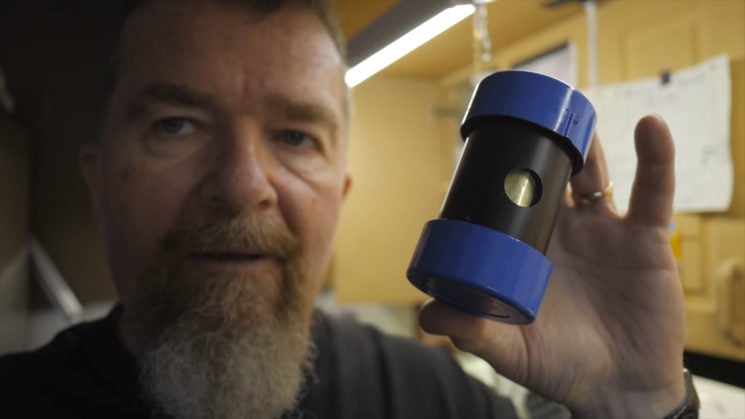 With PVC end caps on either end of the pipe and a small piece of thin metal with a pinhole in the centre, the camera is almost complete. The only thing which needs to be added now is some kind of shutter mechanism. For this, Joe cut up the cover of a plastic file binder. He cut a hole in a part of it and taped it around the pipe. This allows him to rotate it around the pipe at will to expose the film and then end the shot.

The cap at one end of the pipe is glued in place, with a marker showing which side of the camera is the front. Obviously, if your pinhole’s covered up, you need some indication as to which way you need to point it. The top is removable, allowing you to place and extract film or direct positive paper (which you’ll want to do in the darkroom). 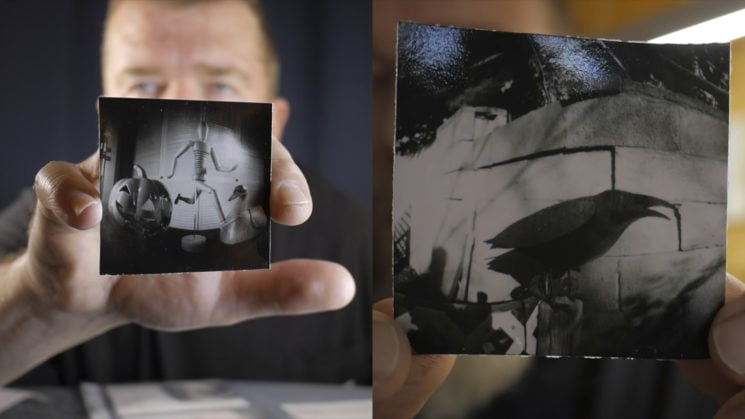 You may wonder why Joe wanted to make a whole bunch of these. But when each camera only has one shot, and you need to be in the darkroom in order to reload it, it would be a very short photography trip if you only made one. The fact that these are so easy and inexpensive to make, though, means that making a bunch isn’t a huge problem.

One thing I might suggest, is to have end caps of different colours. This way, you know which side of the camera is the top and which is the bottom. This won’t really matter when you’re making a photograph. But, if you have a box into which you place them all, you can insert used cameras upside down, and you’ll immediately know when you go to take your next shot which camera is ready for use.

I’m tempted to see how well this might scale up to using 4×5 sheet film. After all, World Pinhole Day is coming up at the end of next month!

« Fake video tutorial exposes photographers’ hypocrisy about copyright
Don’t like selfie stick? Check out a new gadget from its inventor »