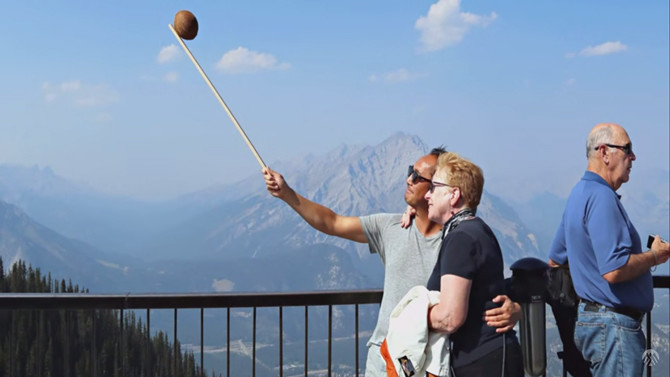 Kotama Bouabane, a photographer and artist in residence at the Banff Center in Alberta, Canada, had the idea to make a camera out of a coconut shell to see what kind of photos he couldget. To do so, Bouabane poked a hole through one of the coconut’s “eyes”, cut it in half, then drained and removed the coconut meat. To expose a photo, he simply slides a piece of photographic paper between the two halves and opens the “eye” hole to let in light. (Bouabane even saves the coconut water to put into his chemical baths when he’s developing the images.)

“I think there’s a lot of humor in the work I do…and I think building a selfie stick and mounting a coconut to the end of it and taking it to tourist destinations is an absurd gesture to do, but I also think that it comments on how we’re obsessed with place and how we use objects and how we photograph things in this day and age.”

As far as camera design goes, the coconut camera is pretty basic. Bouabane says he’s very limited in terms of focusing and the process takes a lot of experimentation. But, because of the inherent amusement involved when taking photos with a coconut, there’s also a lot of fun to be had.