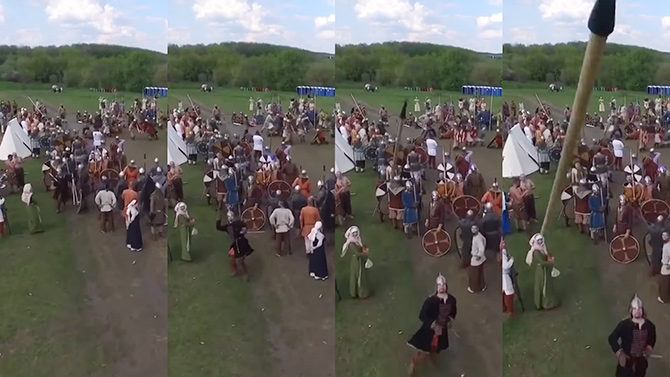 As if eagles and nets weren’t already enough for drone users to worry about, now we have to deal with javelins, too.

The eagle eyed amongst you might’ve noticed the historically-inaccurate porta-potties in the background of the image above, but it seems they managed to escape the wrath of participants at a renaissance festival in Russia recently, unlike this drone that managed to capture its own death.

While the motive is more than a bit questionable, you have to admire his throwing arm.

Of course, they take historical accuracy very seriously at events like this, and even pulling out your smartphone to grab a quick snap could possibly see you spend a night in the Iron Maiden (and not the good kind with the drums and guitars and Bruce Dickinson), but this person’s reaction does seem a little extreme.

It’s an interesting topic, though, where the line is to be drawn at such events.  Obviously, those participating want the experience to be as immersive and accurate as possible (without all the hassle of real blood and actual death), but without visual documentation it’s difficult to promote the events and find new participants as the old quit going.

Ground based photographers have found many ways of blending in at renaissance festivals and re-enactments, but I can’t imagine how you might be able to disguise a drone while still allowing it to fly and function that would be believable and fitting to the period.

Somebody might want to point out the historically-inaccurate horseless carriages parked in the background to this guy, too.  I bet he’d have a lot of fun killing those.

How to create accidental Renaissance photos with light and composition

« Canon announces a new top of the line speedlight and confirms macro lens rumours
Full Time vs Fake Photographer, can you spot the difference? »