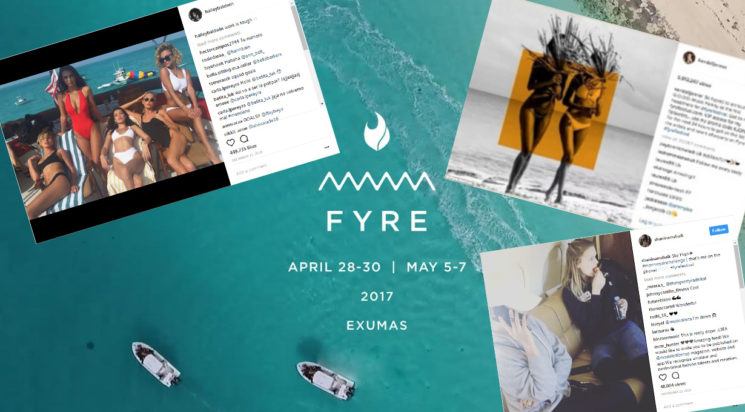 When you’re organising a festival, or any kind of event, really, you need to advertise. But one month before the Fyre Festival in the Bahamas was due to happen, organise realised they’d spent almost all their funds. They reportedly spent millions of dollars on celebrity guests, private planes and yachts to promote this luxury event. And a big chunk of it went on Instagram, including $250,000 for a single post on Kendal Jenner’s stream.

Organisers Ja Rule (yup, that one) and Billy McFarland seem to be in quite some hot water as a result. And we’re not talking about the warm water of the Bahamas. The lack of proper planning and budgeting has meant that one of two festivals planned has been cancelled. They’ve been hit with not one, but two class action lawsuits in as many days.

While the video above is all very luxurious and idyllic, the reality seems like a bit of a train wreck from the start. And reading Vice’s article on how it all seemed to unfold is almost comical. None payment of staff and vendors for months leading up to the event. Budget mostly spent on marketing rather than the event itself. It’s one disaster after another.

Vice report that the organisers spent hundreds of thousands of dollars on lesser known “influencers”, besides Jenner. A personal “familiar with the payments” told Vice that none of those recipients were paid less than $20,000 each. And this sounds like a lot, but overall they apparently spent millions on celebrity endorsements and marketing in total.

Of course, when you expect people to want to spend $500-2,000 per ticket to attend, you have to splash out a little. But you should make sure you have enough left over to, you know, pay the vendors, and staff, and artists. Oh, yeah, and to hire toilets and showers.

$250,000 is also a whole lot of money to spend for a single Instagram post. But when an account has 80 million followers, many of whom are your target demographic, you can’t expect it to come cheap. The post has since been deleted from Jenner’s timeline. 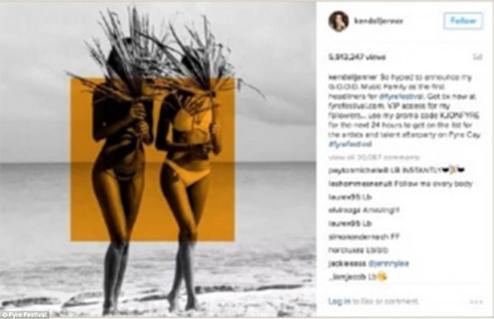 Others, including models Shanina Shaik and Hailey Baldwin still have their posts online.

The organisers are now facing a pair of class action lawsuits. The second of which is aimed specifically at their marketing. Mixmag reports thatthe suit “specifically centers around the festival’s controversial use of “social media influencers” as their primary marketing tactic”.

The suit argues that the posts falsely advertised that the event would be attended by those and similar celebrities. As none of the posts, except for one, were labelled as sponsored or paid advertisements, one can understand why. The Federal Trade Commission has rather strict requirements for such endorsements.

The organisers have promised refunds to ticket holders. But with the looming lawsuits, it seems they’re trying to hold onto as much cash as they can. They’ve apparently started circulating forms to get free tickets to the 2018 Fyre Festival in lieu of a refund.

We have received support and commitments from several musicians to perform at next year’s event. We would be so thankful to have your support as well.

Personally, I don’t think there’ll even be a 2018 Fyre Festival.

I get the allure of “influencer advertising”. It’s basically just an evolution of more traditional celebrity endorsements we’ve had on TV and in magazines for years. It’s become a valid form of marketing for many companies because it works. And it works really well when it’s done right. This debacle, though, really takes it to ludicrous levels.