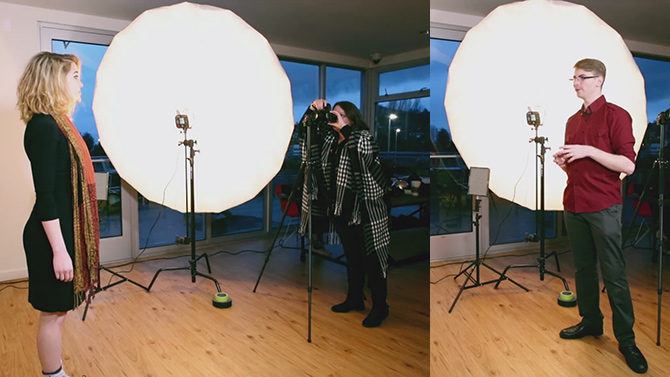 In this very non-scientific exercise by Seattle based portrait photographer Ben Lucas, we see if subjects can tell the difference between photograph created by a full time working pro vs a paid actor.

The camera, lighting and setup is identical for each “photographer”, to try and illustrate that creating a portrait is about more than just the technical.  You need to be able to connect with your subjects to bring out their personality and real emotion.

The biggest obvious flaw in this comparison, at least to me, is the quality of the actor.  I’m sure somebody like Al Pacino or Morgan Freeman would probably have been able to get even better results from any of the subjects than either of them, and I doubt that the immortal phrase “Say cheese!” would’ve been uttered even once.

Ben also had the advantage of being able to start building a rapport with each subject much sooner than the actor, given that he interviewed each of them personally before their sessions.  I did say that this comparison wasn’t very scientific, right?

We’ve covered the Pro vs Joe topic before, and it’s a debate that often comes up on photography forums and Facebook groups, but there’s definitely a lot more to it than simply how you interact with your subject during the shoot.

It is a contributing factor, sure, but is it enough of a difference on its own?  What do you think?  Did Ben manage to successfully prove his point?  Or do you think that given the technical side of things was sorted in advance, that anybody with an ounce of personality could’ve easily done as well?  Let us know in the comments.

This is why you’ll never make it as a photographer

Dear entitled photographer, this is NOT how you start a photography business

This photographer creates prints with algae

Do these three things to make more money as a photographer