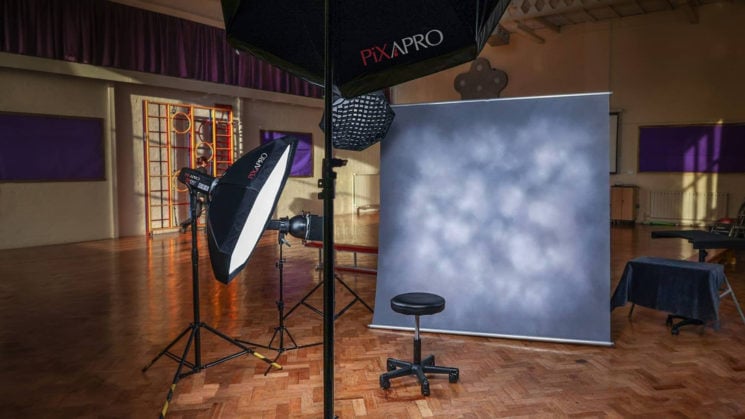 Having been a school and graduation Photographer for 20 years, I have changed my lights several times, always looking at improving my workflow, quality and stability light output, photographing hundreds of pupils per school per day, the importance of stable, colour consistent lighting is essential for fast post-editing and printing.

By far the best and most rewarding move was to go all battery-powered lighting in 2015. I will give a few details of how I have tweaked my kit over the years to get to my perfect balance of power, weight set up and transport.

Initially, I used all AD600 Manual / TTL Heads, but have moved over to Pro version and my main lighting is now. AD600Pro and AD200s for various school setups, and the AD600Pro for when I need a single light for larger outside groups, I could double up 2x AD400Pro, but again find the AD600Pro on its own gives me enough light for groups.

This I use for 80% of my school photography, allows me to balance all my lights and run pupils through the studio every 20 seconds, my workflow may be different than yours, but I will give you the number of pops I get per battery charges and my power setting as a guide.

Components of set up are:

I carry the 3 AD400Pros in a backpack along with 3 spare batteries, this also has a space for other things and will take a small laptop in its rear zip up compartment. 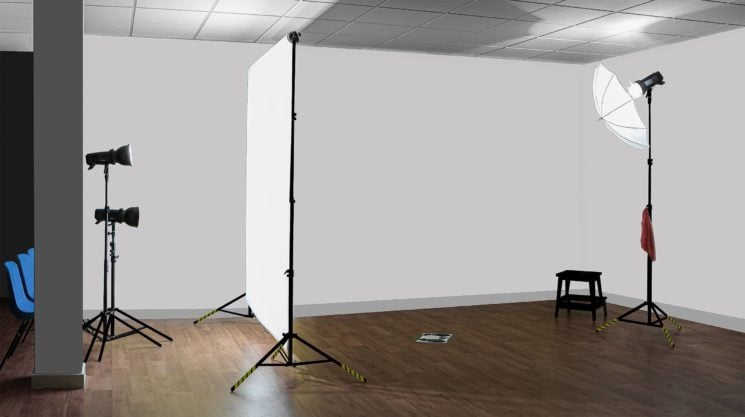 This setup gives me a large white Hot-Spot down the backdrop. The paper could easily be lit from the front with the 2 lights, but I prefer the look of the studio setup, again the presentation of my studio is important.

Hot spot area and how clean the studio looks from the front can be seen here: 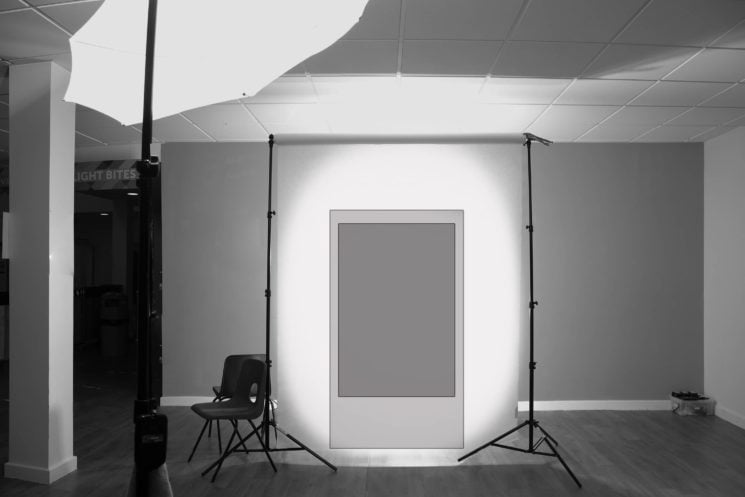 You can also use an Octabox, this will give a little more contrast but needs a little more careful placing of the pupil to avoid a dark fall off on the pupil’s face, Umbrellas are a lot more forgiving and give a nice soft fall off.

The Octabox I use is the 85cm (33.5″) 16-Sided Easy-Open Silver Interior Parabolic Softbox, which pops up just like an Umbrella. 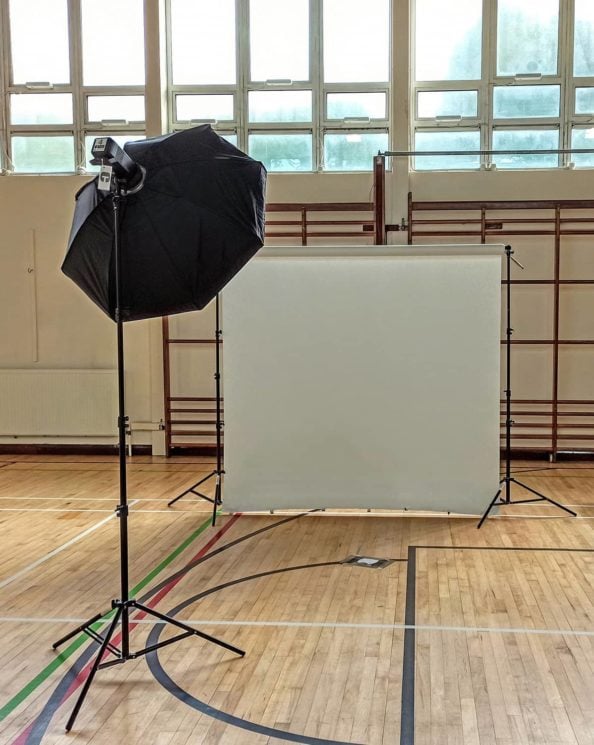 This is a more complicated setup, for multi-pose shots.

For this, I use 2x AD600s combined with 2x AD200s with the following equipment: 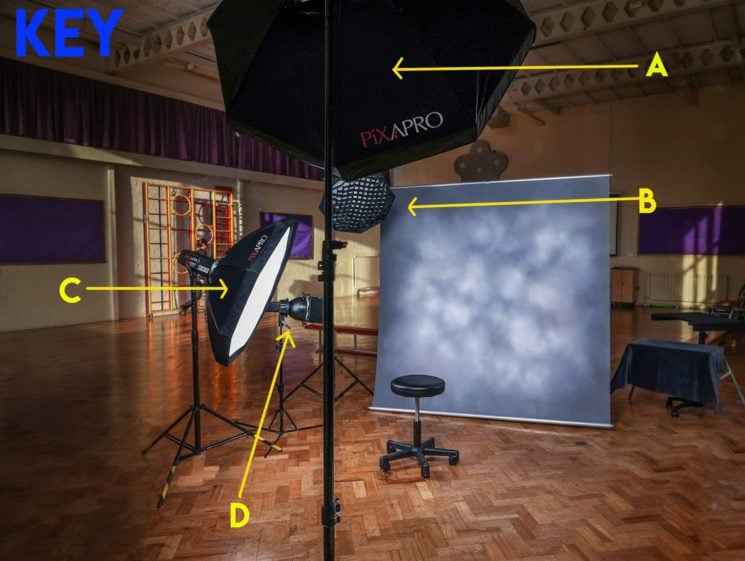 An issue at many schools is that of privacy on the studio area, we have all been there with a large line of pupils and they are laughing at each other and the pupil on the studio struggles to pose, all these delays can cause issues later in the day. It is important to keep a fast workflow, so an addition I added 5 years or so ago was the right-angle studio. This is a simple set up, but you can also use it to shoot 2 different backdrops for each pupil, light setups will be different for a two backdrop shoot.

I add one more studio stand and crossbeam along with the bracket shown, now the bracket is originally designed for hanging 3 paper backdrops in a studio (they come in pairs). You can either use a small dark backdrop as the privacy part or I use an Oldbury Series Double-Sided Textured Collapsible Background allowing me to shoot the two backdrops.

The Right-Angle Bracket I use is one of the brackets from Pair of Triple Crossbar Light Stand Brackets. 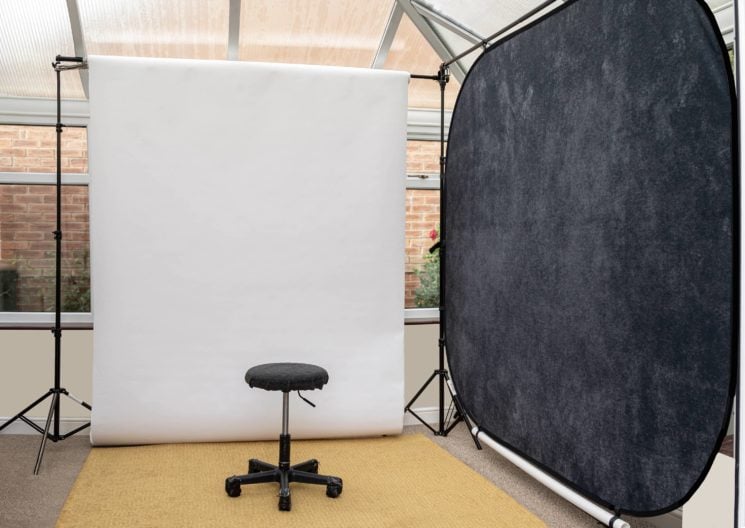 This image has the bracket overlay showing 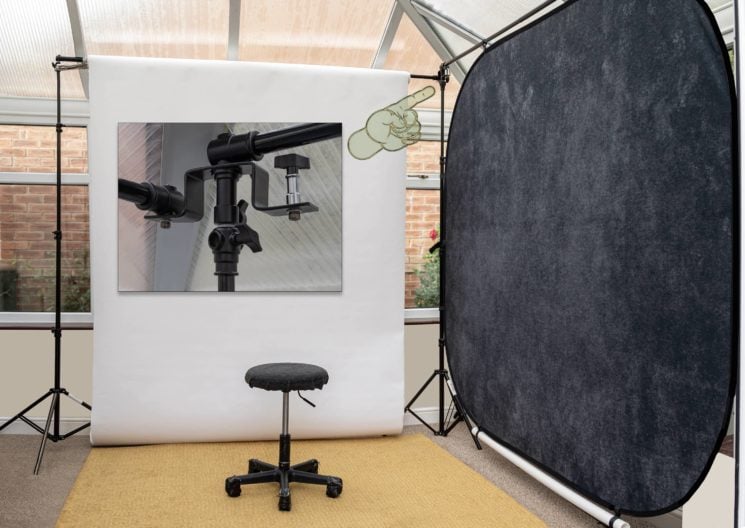 This studio setup creates a private area within the studio and the pupil line feeds to the front of the studio area allowing just the next 1 or 2 pupils to see how to pose when they walk on, any chatter from other pupils is not heard or seen by the pupil being photographed. 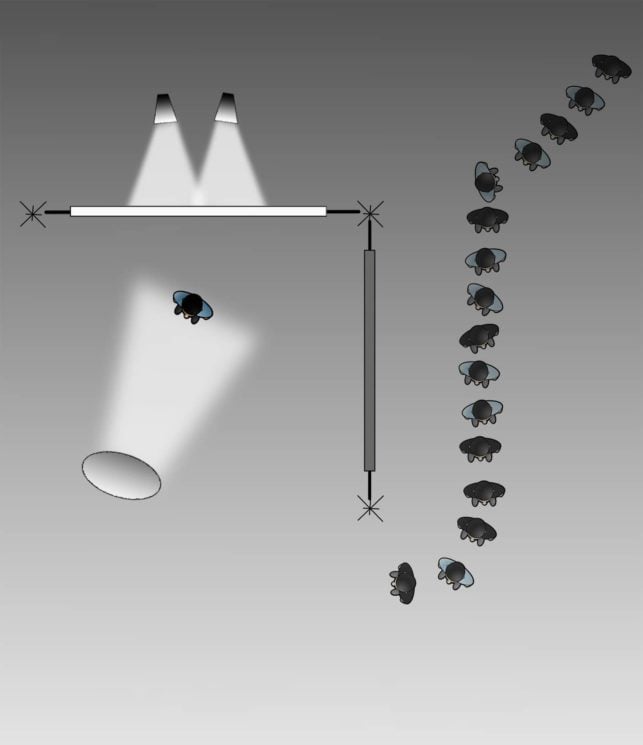 So, I guess the most important thing people want to know is if I can replace my 240v lights with battery lighting?

The simple answer is yes, battery technology has improved 10-fold over the years, now offering constant and consistent power. Combine this with reliability and you have the perfect fast set up for school photography.

The Pros of Battery Lighting:

Specifically, in respect to Setup 1, the lights are running at the following; obviously, there may be a small difference, but I aim to set the lights as below.

I get around 700 per charge per head off the AD400Pro battery, I have 3 batteries on charge and swap out during the day. I have never worried about running out of power during very busy shoots.

Benefits to this Set up:

If I am using the AD600 standard, I will get 1000 pops on average, so more than the AD400Pro, but for me, the advantages of the smaller lighter AD400Pro overcome the fewer pops per charge, I still have and use the AD600 standard but my preference is to take the 3x AD400Pro setup out.

Running the AD200s on studios, the AD200 is a little 200-watt head, the same size approximately as a speedlight and they work well combined with any other light. The first time I used the AD200s, I was surprised at the power they supply; I have run full studios just on AD200 units, perfect for nurseries where space may be tighter, but I will always take spare batteries that are charging during the shoot.

I would be more than happy to run the multi-light studio fully on AD200s potentially increasing the camera ISO from 200 to 400 allowing me to type down the power from the AD200 and getting more pops per charge.

Mark Ratcliffe has been a school and graduation photographer for more than 20 years, constantly learning and adding to his arsenal of gear and techniques. When he’s not shooting, you’ll often find Mark teaching other photographers. This article was also published here and here and shared with permission.