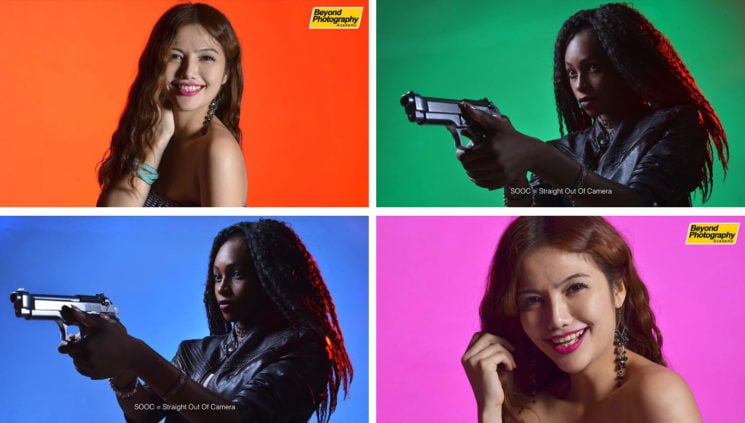 In his previous tutorial, Malaysian photographer Andrew Boey showed you why a white wall is the only backdrop you’ll ever need. After turning white to black, in his latest tutorial, he teaches you to get all kinds of vibrant colors from a plain white wall. You don’t need a backdrop or Photoshop, but some speedlights, light modifiers and color gels.

Andrew and his model Nadeen demonstrate the turning of a white wall in a background that can take any color you like. The first step, of course, is to get some color gels and attach them to a speedlight. Andrew chose orange for his demonstration, placed it onto the speedlight, and hid it behind Nadeen. The speedlight hits the wall, and it will color it with the color of the gel. As for the brightness, the speedlight is set to full power.

Now, you want to make sure to get the perfect black background first. Set the camera and fire it without the flash until the entire photo is black. Andrew’s settings in the video are 1/200, f/16, ISO 200, but of course, you can work out your own to get the desired result. 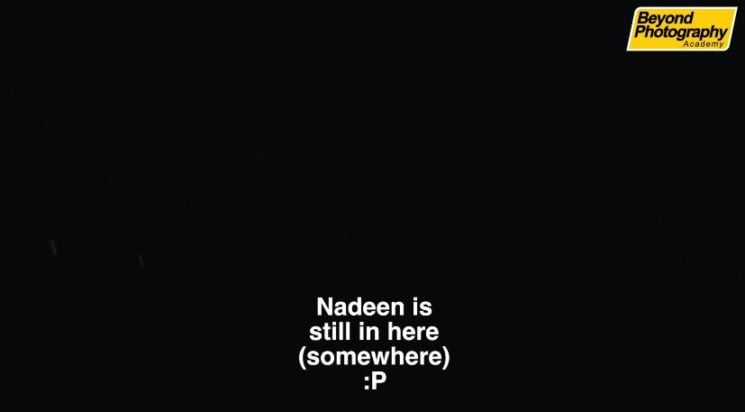 When the background is bright, the color will be too bright and washed out. On a darker background, the color is much more visible and vibrant. 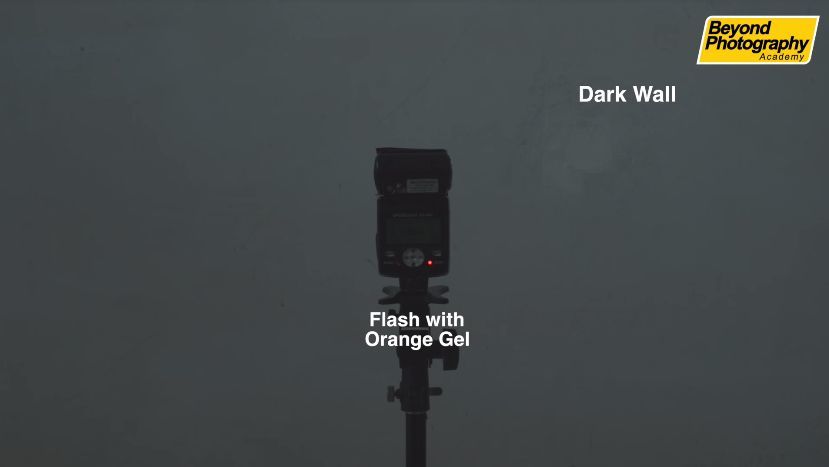 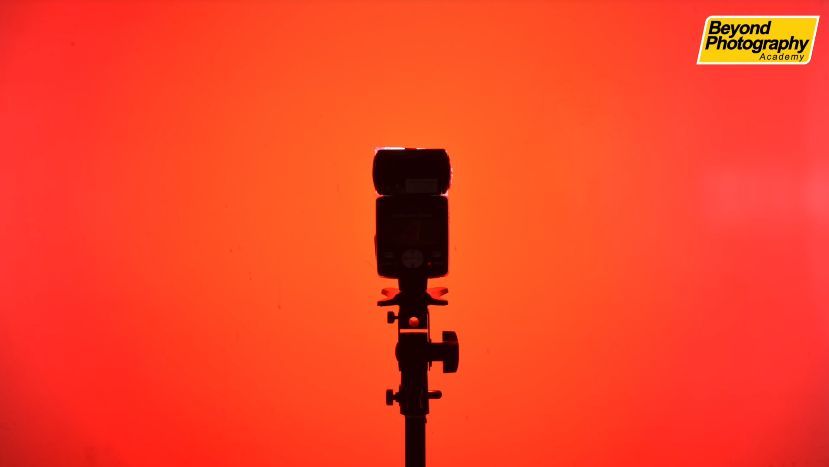 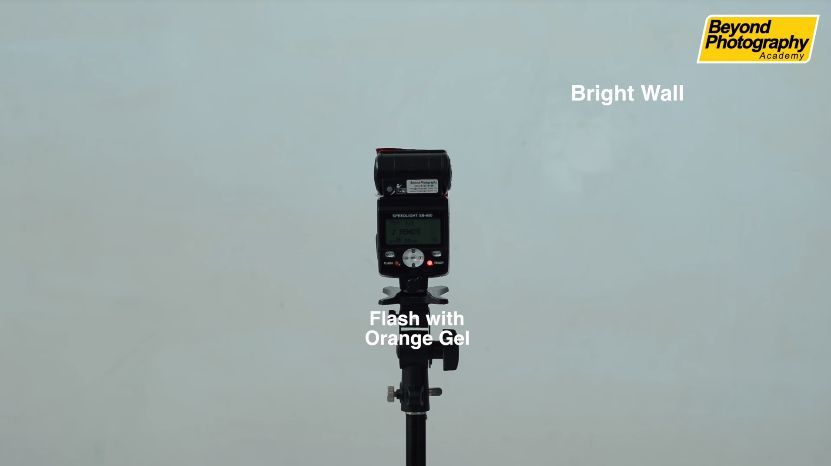 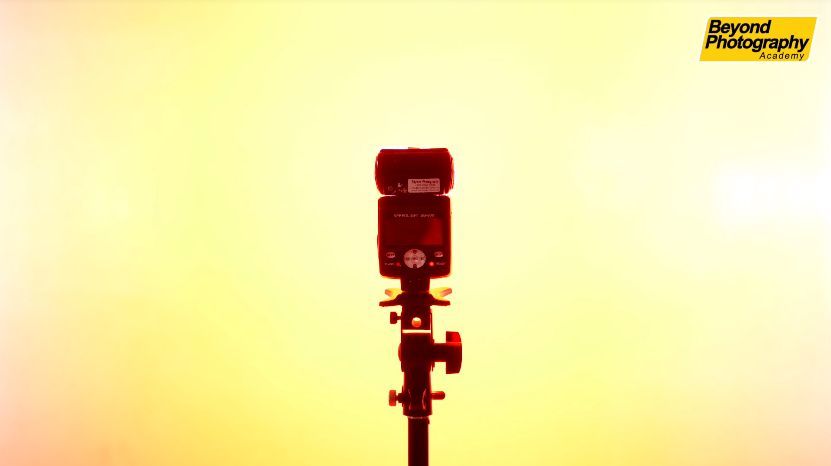 Now that you’ve chosen the settings, trigger the background flash. This is what you’ll get: 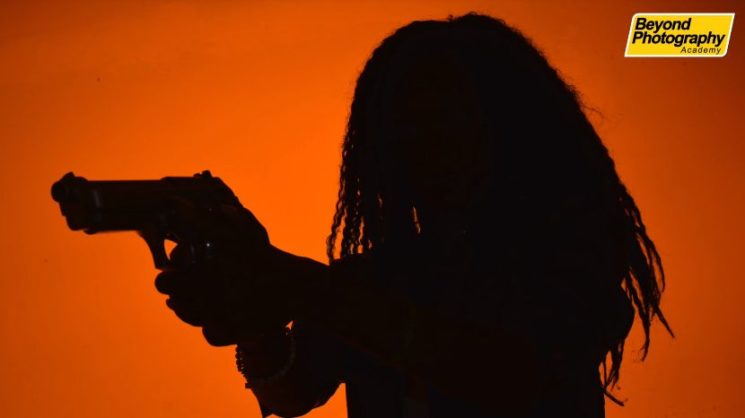 You’re not quite there yet, so now it’s time to shine the light onto the model. Set up the rim light first, and choose the color you like. Andrew chooses red and sets the flash to full power 3 feet away from the model. This is what the photo looks like now: 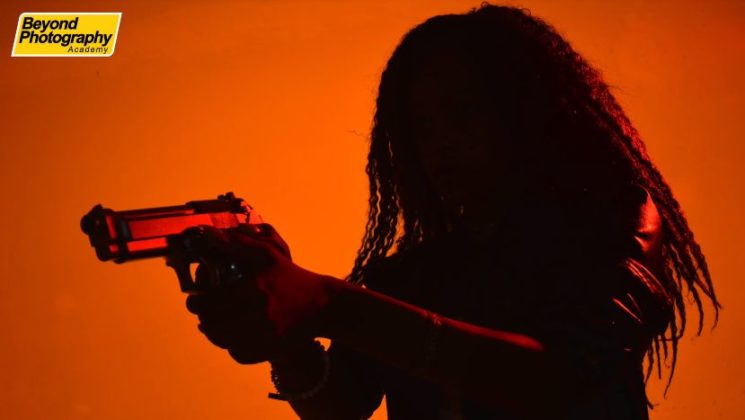 After the rim light, it’s time to add the main light to the model. A bare flash gives too harsh light, while shooting through a modifier spills the light onto the background, washing out the color. So, just like in the previous tutorial, he uses a reflective bounce umbrella to get a more flattering light onto his model and avoid spilling it onto the background. The main light is set up above the model, and here’s the setup: 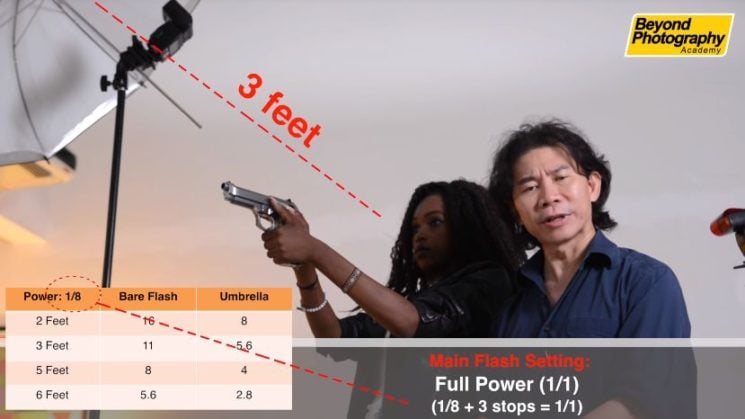 Andrew uses a cheat sheet or the speedlight, and it tells him that the main light also needs to be at full power with his settings. This is the photo he gets now: 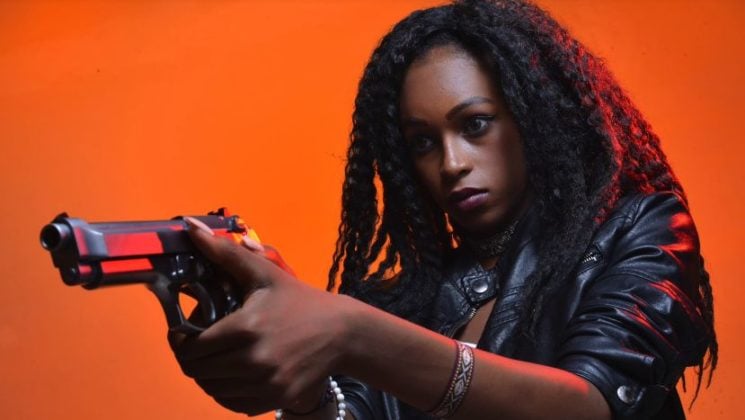 The main and the rim light are pretty neat, as well as the background light coloring the wall orange. But, the gun is reflective and appears red in the photo. If you also photograph a model holding something reflective, you may want to fix this, and you’ll need another flash to light up the reflective object.

To determine where to set up the additional flash, use light source tracing. Take a piece of cardboard that’s black on one side and white on the other. Point the black side towards the object (in this case, the gun) until it casts a shadow on it. From that position, switch the card so the white side faces the gun and attach it to a stand. Add a speedlight in front of the card, so it bounces off of the white surface and lights the gun. It should be around 3 feet from the gun, and with the flash set to full power. Think of the shooting angle and set up the flash and the card so they hit the object and light it up. 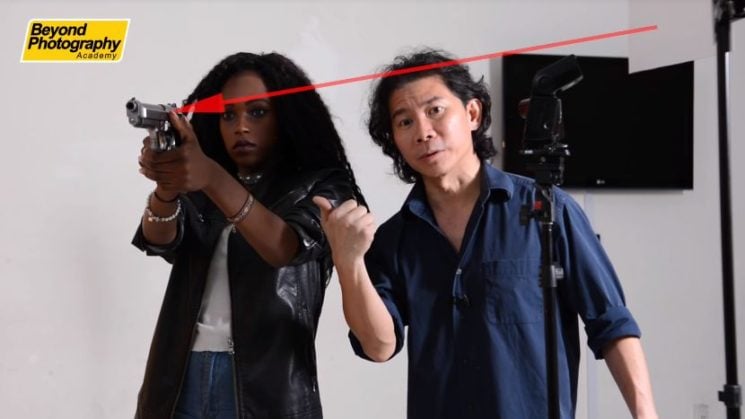 And now, check out the photos Andrew got with this setup. There are straight out of camera ones, as well as the photos he enhanced in Photoshop. 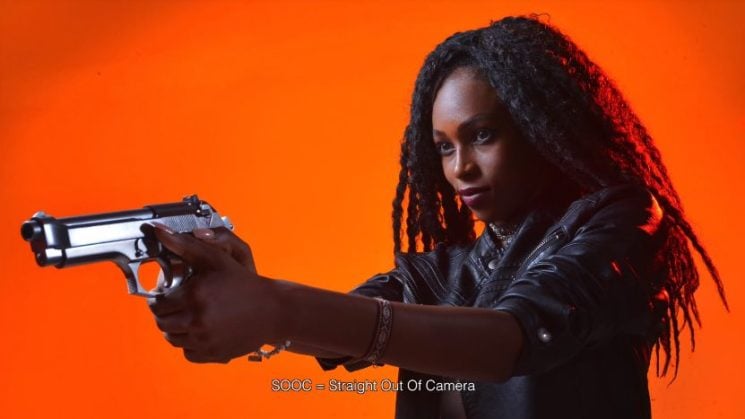 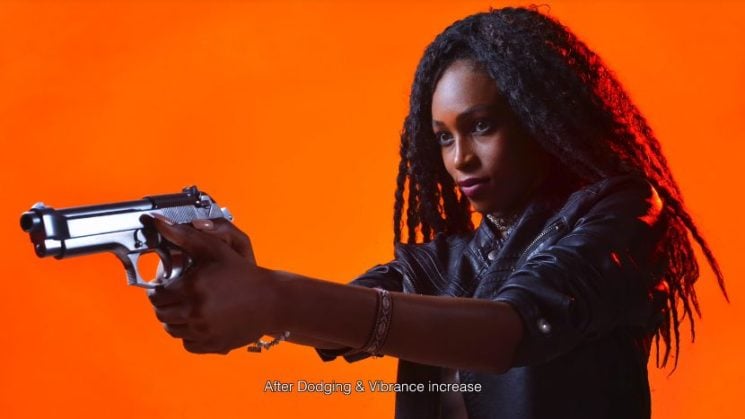 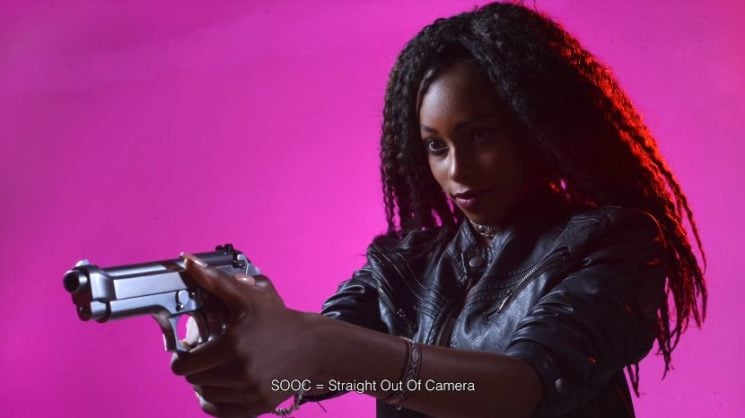 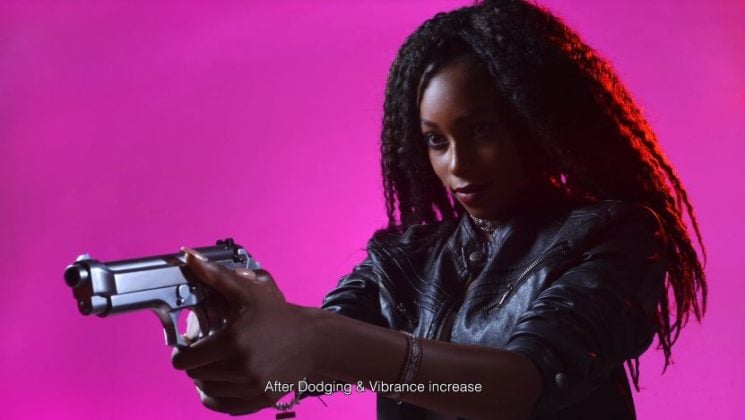 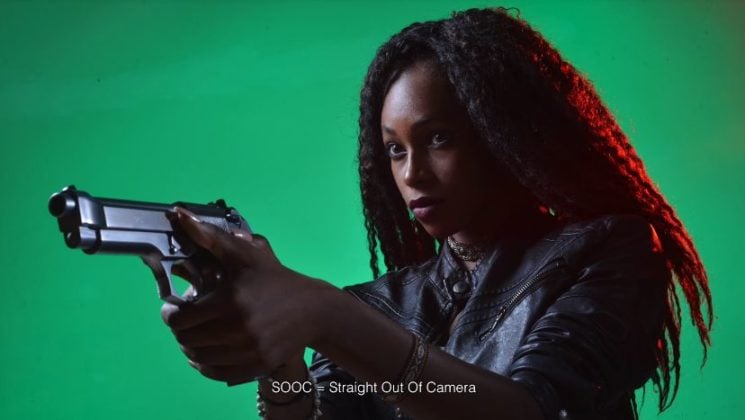 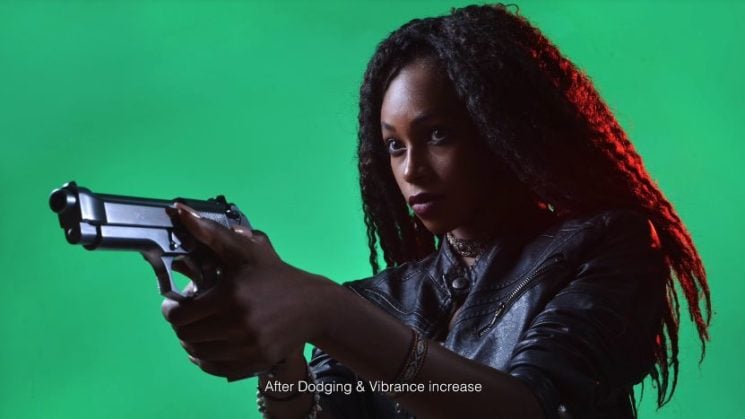 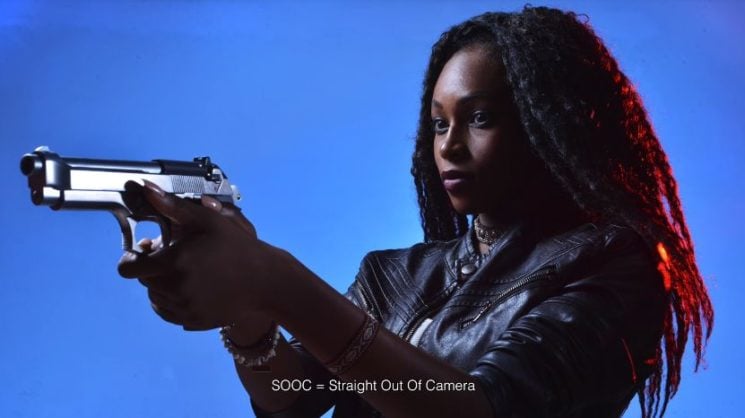 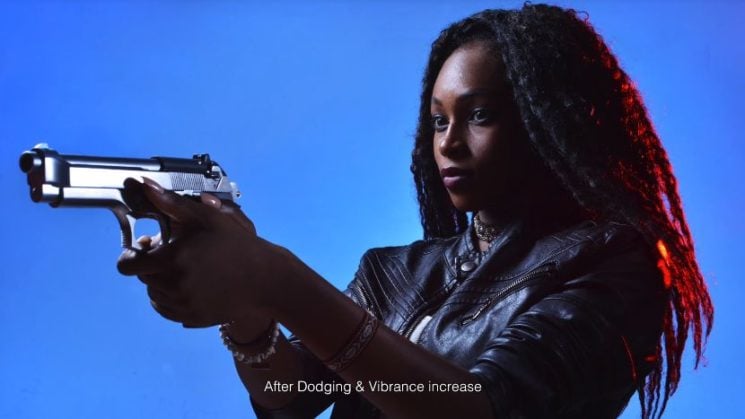 As you can see, even the sooc photos look good and the background has vibrant, saturated colors. If you don’t have a reflective object in the photo, you can go without the last speedlight, but only use those for the background, rim light and main light. And if you’re working in a white-painted studio, you can definitely play with it using nothing but speedlights and gels.

[Saturated Colored Background. NO Photoshop! NO Backdrop!!! | Beyond Photography]

Tutorial: How to create and use different colored lights for composites

« You can all stop asking about camera settings now. Here’s all of them
How I made this image using my favourite compositing technique »