When you spend a significant amount of time shooting underwater photography with a set of strobes in DIY underwater strobe housings, sooner or later you’re going to lose a soldier. 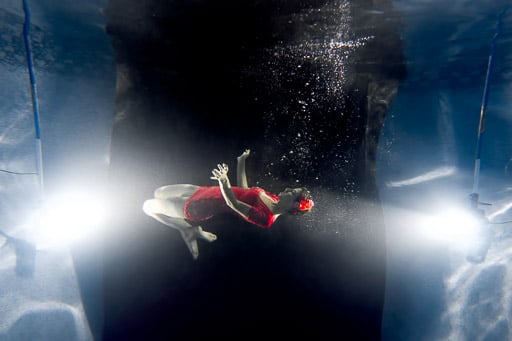 I’ve heard about phones being revived from the dead, but I’m not sure if anyone has ever done it with hot shoe flash.

MONK  He can still make it.

I was on location setting up lighting for a rather complicated underwater fashion photography session.  I had a number of studio strobes on deck and three hot shoe strobes in DIY underwater strobe housings underwater in the pool.

It took quite a while to set everything up, so the underwater strobes were powered up and underwater for quite a long time before we even began shooting.

I was also rushing to get started because there was a wicked late summer thunderstorm on its way, so I was probably not as careful as I normally would have been. 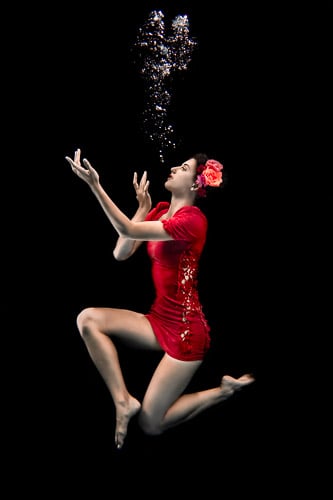 I always just kinda assumed that if a flash got wet, it would just stop working.

Well, for future reference, that is not necessarily the case!

About ten minutes into the shoot, one underwater strobe began to fire on its own at random intervals.

All of my lights were daisy chained together in a big huge optical slave loop – so every time this one strobe fired on its own, all of my six other lights would pop with it.

We ignored it for a while.  But it is really hard to concentrate on getting the shot (especially while you are holding your breath underwater) while your lighting set up is possessed.

At one point I was actually wondering if one of the optical slave eyes was seeing some far-off lightening, causing them to trigger.  But we were pretty sure that we were still in the clear as far as the thunderstorm went, so we kept going.

Almost everything was firing at or near full power (it takes a lot of watt seconds to light underwater) and for a long time all I knew was that I had several thousand watt seconds of light exploding for no good reason.

This is one of those times on during a shoot that you swear.  Loudly.

In this case, I had a backup strobe so it was a simple case of swapping out a dry one for its fallen comrade – although I did feel pretty bad for the new guy.

It kind of reminded me of those stories about World War II bomber tail gunners.  They were always the first ones to get shot and were just replaced by the next guy in line.  But I digress… 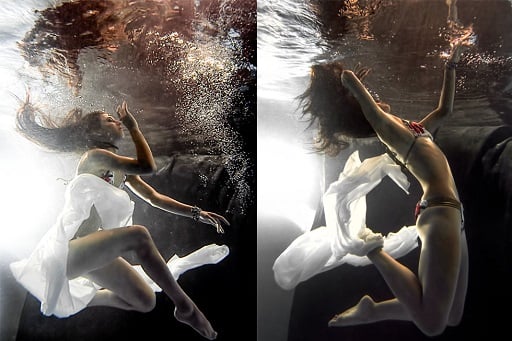 What to Do If Your Flash Gets Wet

First of all, we should make a distinction between fresh water and salt water.
Anything that is submerged in salt water is toast.  Pay your last respects and move on.

I have learned that salt water pools are particularly sneaky.  They just sit there looking all fresh water and benign, but a week later all of the screws in your underwater grip are rusted solid.  If you encounter a salt water pool, the talent might look at you a little weird, but don’t be afraid to take your grip into the shower with you.  Anyway, don’t say you weren’t warned.

Right, so what to do if your flash gets soaked in fresh water.

Do what I didn’t – ask the internet.

There is a shocking level of consensus online about this – the solution is to immediately pull the batteries and then put the item into a sealed container of rice, or similar water absorbent material for a long period of time.

The internet is also surprisingly consistent in recommending not to heat up the item to evaporate the water.

Of course, I did not ask the all-knowing internet – so when I got home, my first instinct was to stick the flash in the oven.

I set the oven to the lowest temperature it would go – 125 F, and let my flash bake for a few hours. 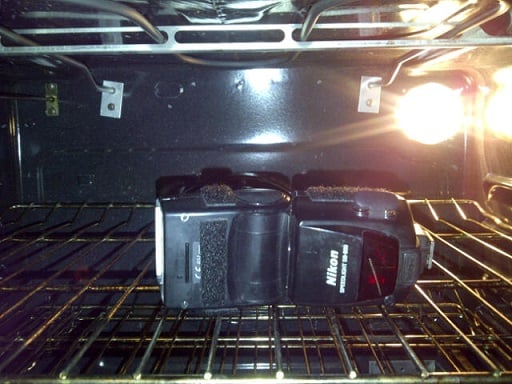 The next day, I popped in a set of fresh batteries and tried to power her on.  To my delight (and surprise), she powered right up – LCD screen and everything.  I sat there looking at the test button for a second, wondering if I dare…I set the power way down to 1/128 and watching the flash tube intently, hit the test button.

I was greeted with a blinding flux-capacitor one point twenty-one jiggawatts of light, complete with a loud crack.

It was as if Zeus himself threw a lightning bolt out of the Fresnel of a speedlight right into my eyes!

Again, this is one of those times that you swear.  Loudly.

(By the way, did you know that you can buy a flux-capacitor on eBay for only $350 bucks!)

I didn’t touch that flash again for several days.  Eventually, I was cleaning up from the shoot and had to face burying it in a shallow grave.

Did you ever hear of the tradition of sailors being buried at sea?  Supposedly, their bodies were sewn up in their hammocks and thrown overboard.  The last stitch was always supposed to be through the sailor’s big toe, just to make sure the poor guy was really good and dead.

So I figured, what the heck – I’ll give it one last shot.

I put in a fresh set of batteries…and she powered up…so far so good.

Then for the moment of truth – the test pop.  I set the power right down to 1/128th, and shielded my face from the nuclear flash that I expected to be released.  (Unless of course the flash tube was already blown from the last test pop – which I was also half expecting).

To my utter amazement, it seemed to work properly.

I tried again.  It worked.

I went through a whole series of test pops, cycling from minimum to full power.
Everything works…at which point I’m running around my studio yelling “Its alive!!! It’s alive!!!”

In the end, the LCD is a little wonky, but the flash seems to function perfectly normally.  I figured that it would be a good idea to recondition the capacitors following David Hobby’s flash reconditioning tutorial on Strobist, but other than that I didn’t do anything else.

So…anyway…I hear that used SB-800s are a pretty hot item on eBay…so if you know anyone that’s looking for a gently used SB-800 that’s really clean…let me know.

What Photography Gear Have You Destroyed and Then Rescued?

Let us know about a piece of photography gear that you sacrificed in the line of duty, only to revive it from the dead.  What happened and how did you resurrect your gear?  Leave a comment below!

(Bonus point if you can name the movie the lead quote came from.  Hint – you probably have to be old enough to have shot film for a while.)

This photographer baked a cupcake in his Canon 5D Mark IV