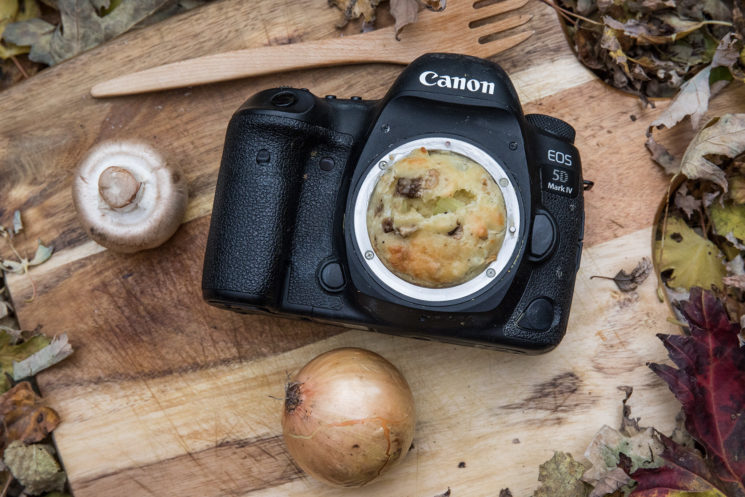 Those of you who follow Eric Paré’s work know him for amazing light painting photos and tutorials. But this time, he did something completely different, which could make Canon lovers among you laugh and cry at the same time. The title is not a joke – Eric and his partner Kim Henry actually baked a cupcake in a Canon 5D Mark IV’s body.

As Eric points out as a joke, he always likes to keep his gear “safe, secure and clean.” Maybe a bit too clean, I’d say, since sometimes it almost gets dipped in water. Because of this, his brand new Canon 5D Mark IV died during the trip to Bolivia. He had a backup (fortunately), and when he returned to Montreal, he sent the broken one to Canon repair station. It turned out that the fungus got inside of the camera. So, there was nothing they could do, because the warranty doesn’t cover it.

In an attempt to add some humor to the loss, Eric and Kim decided to make the most expensive cupcake mold in the world. They took the ingredients, got to the kitchen and baked a cupcake inside the camera body. Mushroom cupcake, of course.

Kim made the dough and poured it into the camera body. For me, this was quite painful to watch. They say they were afraid of fire and smoke, so they moved the oven outside. Fortunately, nothing went wrong. They even made one of those mouth-watering timelapse videos showing the cake being baked. In the end, they even tasted it. It looks like they survived.

This video is painful to watch and funny at the same time, but it’s not just that. At the end, Eric made the point saying that you should never leave your electronic gear in a humid place. It could end up developing the mold … and eventually becoming the cupcake mold. And I’m sure you wouldn’t like those cupcakes that much.

Fresh Baked Flash – How (Not) To Dry A Wet Strobe

« Rent a DJI Mavic Pro for free courtesy of National Geographic
No plans to kill off Lightroom Classic, says Adobe »