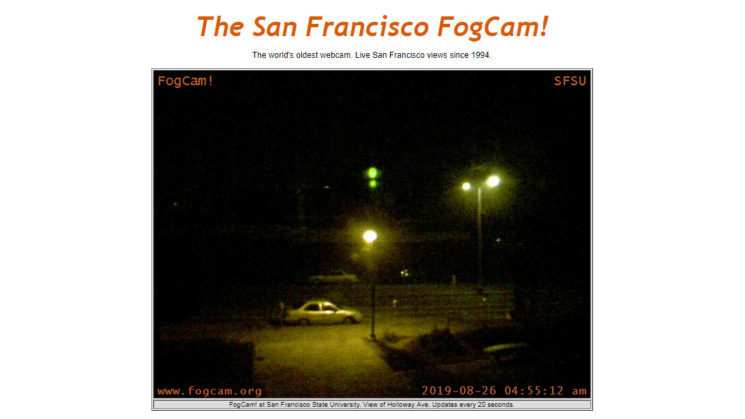 Although still somewhat popular, webcams have become practically obsolete these days with the use of phones, laptops and monitor with built-in cameras. They still serve a purpose, but selfie cameras on phones probably get a lot more of our attention now. At one point, though, webcams were the pinnacle of computer imaging tech for many consumers.

In 1994, San Francisco State University students Jeff Schwartz and Dan Wong set up the FogCam. A webcam that has run in various parts of the campus for the last 25 years, but now it’s shutting down.

The camera was never officially endorsed by the University, merely tolerated, Schwartz revealed in an interview with SFGate. It was originally set up as a way to show the world what life as a student was like on the San Francisco State University campus. It’s being taken down because they say they “no longer have a really good view or place to put the camera”.

After 25 years, Fogcam is shutting down forever at the end of August. Webdog & Danno thank our viewers and San Francisco State University for their support over the years.

The Internet has changed a lot since 1994, but Fogcam will always have a special place in its history.

The FogCam wasn’t the first webcam to thrust its view on the web. That honour went to the Trojan Room coffee pot at Cambridge University after one scientist wanted a way to check the status of the coffee pot remotely. But the FogCam is the longest-serving webcam. Even in 2004, it was considered to be the oldest webcam still in operation, uploading a new image to the web every 20 seconds.

After a quarter of a century, the FogCam will be switched off permanently on August 30th, 2019, but the website will remain for “the sake of posterity”.

It’s seen a lot in its time, both literally and figuratively. It’s survived many of the Internet technologies that have come and gone, and still just kept on trucking. I remember seeing it myself back in the 90s and forgot all about it until the recent announcement.

I wonder what the oldest active webcam would be when this ends? What’s the oldest running webcam you know of?

Uploading Videos To YouTube? You May Be Shut Down for Title Trademark Infringement

« Instagram influencer accused of faking and staging a motorcycle accident for promotional gain
Are you a photography snob? »