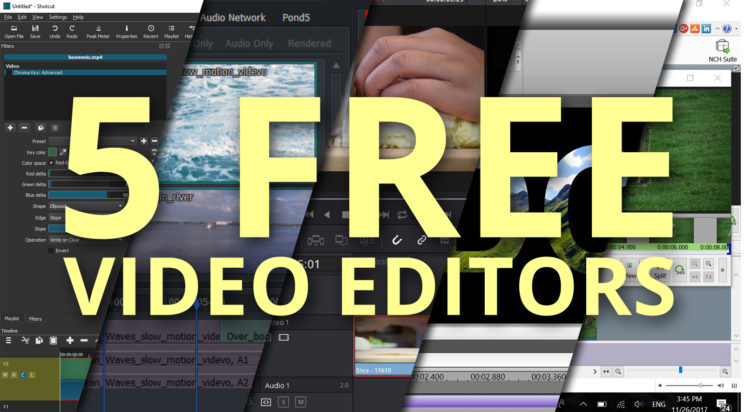 If the price is the only factor stopping you from diving into the world of serious video editing, there we have some good news. Many Hollywood-level post-production tricks can be performed by means of free software. Here we have 5 programs available at zero cost and technically capable of competing with some features of Premiere Pro or Vegas.

We’ll take a closer look at each of these solutions, talk about their strengths, as well as the weaknesses. Well find out if such a thing as free professional video editing software exists, and if so, what it is good for.

DaVinci Resolve is a post-production application by Blackmagic Design. It is a cross-platform solution, which means it runs on Windows, Mac, and Linux. Technically, you can perform all the basic video editing operations in Resolve – cutting, splitting, adding text titles and transitions. And it has come a long way in the last couple of verisons. Its strongest capability, though, is colour grading. In fact, with the level of colour correction that Resolve provides, using it for anything less than professional post-production might seem unreasonable. 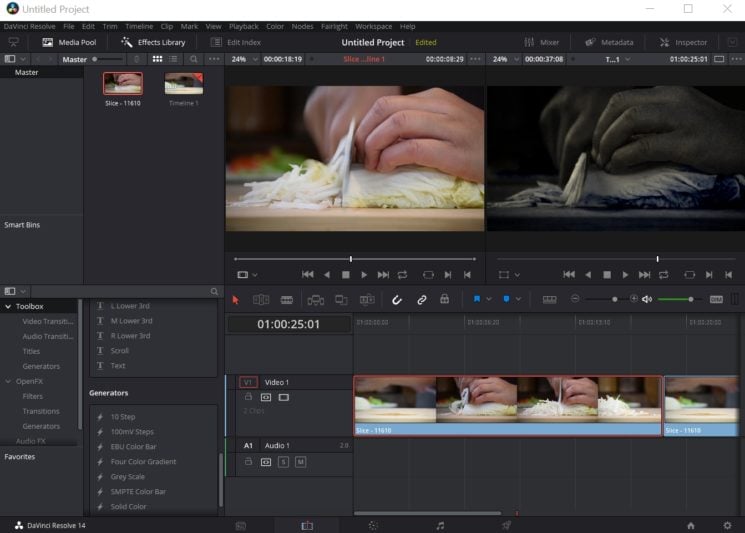 Hands down, the way DaVinci Resolve allows you to work with colour is unparalleled. There are few sort-of-presets called “Generators” to get you started, but as you open the “Color” tab in the bottom menu, it’s a completely different level of editing. You get to access to the usual curves, colour wheels, RGB mixer, and qualifier to achieve exactly the image you need for your project. But there are also a number of tools such as the vectorscope and RGB parade, to really nail in your final grade.

It’s hard to criticize such a powerful application. After all, it’s practically the Hollywood Standard for colour grading. So, instead here is just a couple of clarifications. First, Resolve is probably not a go-to app to perform a quick video fix. If you’ve never worked with colour grading on a professional level, you might get easily overwhelmed. Second, DaVinci Resolve has higher system requirements than the rest of video editors in this list, which narrows down the choice of machines on which it can run without hiccups.

As we talk about Lightworks, it’s important to establish something about this software. Lightworks was initially developed for filmmaking professionals and only became available for public use in 2013. Therefore, its interface isn’t too intuitive for a wide audience and its feature-set might lack quick colour filters or some modern special effects. Yet, if you want your filmmaking hobby to turn into a career, Lightworks is a great app to sharpen your skills. It will empower you with professional-level composition tools and – quite distinctively – support from a huge user-based community. 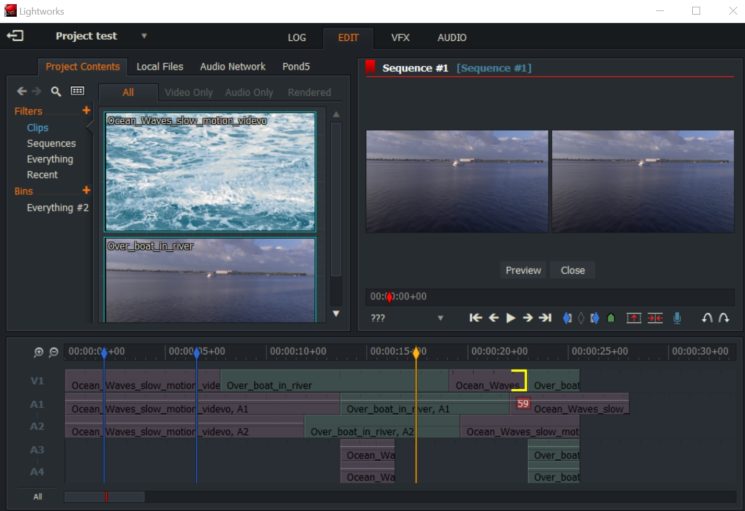 You might be thinking there is nothing noteworthy about splitting video fragments unless you try doing it in Lightworks – to see how precise, fast and intuitive the process can be. Due to the system of pins and shortcuts combined with keyboard hotkeys, cutting, splitting and trimming takes seconds. It’s extremely impressive, and no wonder Lightworks has been chosen for editing Hollywood movies multiple times.

First, apart from the above-described video splicing tool, the rest of Lightworks interface is genuinely confusing. Second, the free version only allows you to export videos directly to YouTube or Vimeo with the 1080p resolution.

VSDC is an multimedia software suite available in a single dashboard. Apart from the video editor, you get a screen capture app, webcam video recorder, slideshow creator, voiceover tool and a DVD burner. The approach to the interface is also slightly unconventional here and may even remind you of the Microsoft Office look. The tricky ribbon-style menu, however, hides quite a rich feature-set. 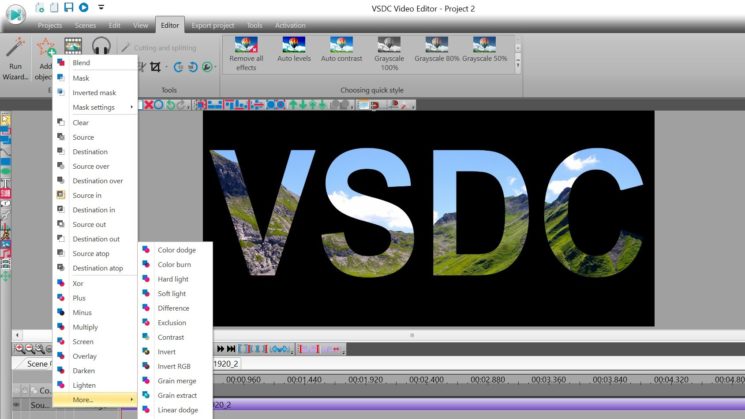 Consider Blending modes as an example. It is not the most obvious, but clearly one of the most artistic features existing in video editing. Technically speaking, it allows you to layer multiple video clips and pictures into one composition and create impressive effects. VSDC has over 30 Blending modes for you to experiment with. For instance, you can composite footage with a static colour background to achieve beautiful gradient, or you can blend a video and a text object – to quickly achieve a “Video in text” effect which seems to be used for almost every TV show intro these days.

First, VSDC is only available to Windows users. Second, the VSDC timeline literally looks like no other. If you have previous experience with more traditional non-linear video editors, getting used to the VSDC interface might be a steep learning curve.

Videopad is a non-linear video editor for personal use. Unlike Lightworks, it has a clear and user-friendly interface that is more likely to attract a wider audience. The app takes just a few seconds to install and offers a decent choice of transitions, audio and video effects including split screen, Chroma Key, and stop-motion animation. Videopad is also among the first tools to support 360-degree video editing. 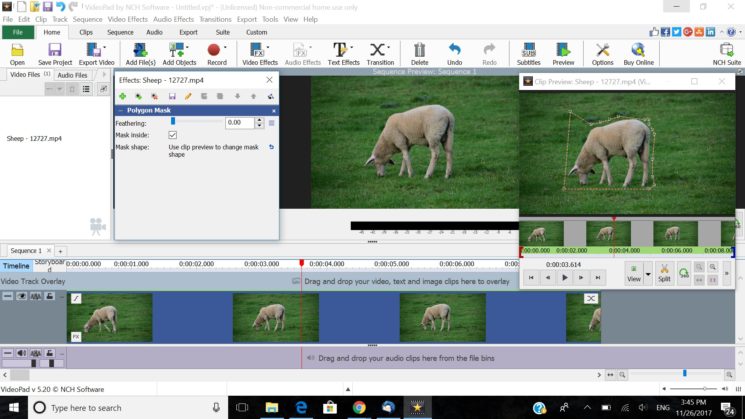 The most impressive Videopad capability though, from a professional standpoint, is video masking. It’s a handy tool if you want to blur something on a video, or if you want to apply a colour effect to a certain area. Typically, applying a mask is quite a challenging process. Videopad allows you to perform it intuitively in a couple of clicks in a separate pop-up window.

There can be only two audio tracks enabled in Videopad for free. That means that if you work on a large project with multiple files containing sound – and you need to use all of them – you’ll have to use a 3rd party software for mixing audio for the entire project.

There aren’t so many good open source video editors out there – Shotcut is one of them. It is Open Source  and available for Windows, MacOS, and Linux users. With its minimalistic interface, Shotcut is capable of all the essential video editing operations, including such challenging ones as film restoration, footage stabilization, and white balancing. What makes Shotcut stand out, though, is its incredibly effective Chroma Key tool. 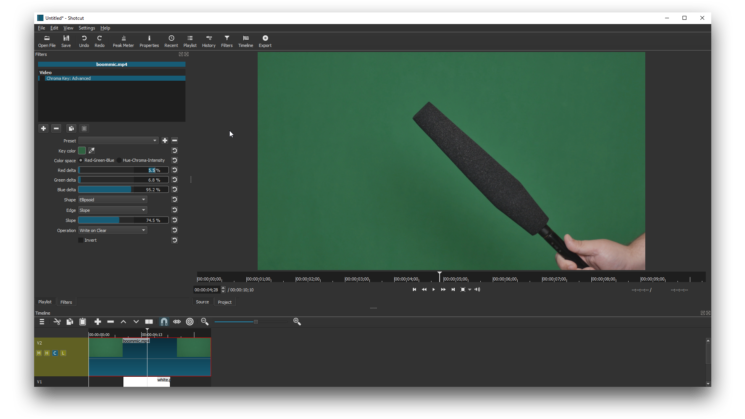 Chroma Key is not an uncommon feature for a video editing software, but rather a must-have. However, each program has its own approach to removing the green background from a video. The way Chroma Key is implemented in Shotcut really makes it a no-brainer. If you ever need to replace a green screen in a video fast and clean – look no further.

First, it is typical for open source projects to lack quality tech support, and Shotcut isn’t an exception. For most uncommon questions, you’ll have to rely on the forum. Second, the software requires a couple of extra tweaks from Windows PC owners. According to the official F.A.Q., outdated hardware drivers or repeated installations can cause frequent crashes.

Of course, it’s impossible to fully replace professional editing tools like Premiere Pro or Vegas with free alternatives, although DaVinci Resolve comes close. However, if it’s a one-time job, and if it’s a particular feature you are looking for – don’t think of breaking your piggy bank just yet. As you can see, quite a few advanced-level video editing tricks are available at zero budget.

« Nude photographer sues National Trust for Scotland for damaging his reputation
Three mistakes all beginner portrait photographers make, and how to fix them »