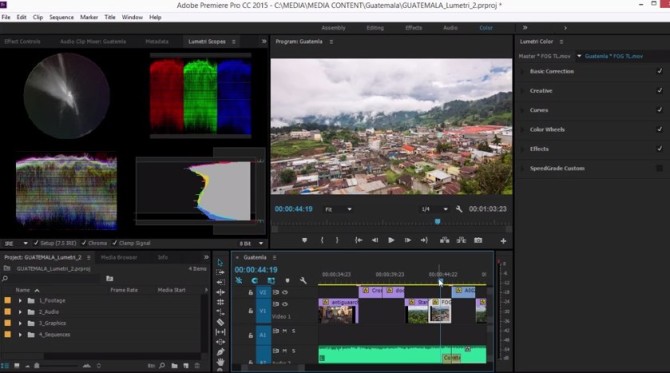 The next round of updates to Adobe’s Creative cloud for video should be pretty exciting for anyone who is heavy on video editing. Adobe is adding two tools for video editing and color grading that should really streamline the video workflow. They are called Morph Cut and Lumetri Color Panel.

The first one is Morph Cut. This one is aimed at helping you remove all those ‘aa’ and ’emmm…” from a clip. Morph cut is a transition effect that once applied on a jump cut, it smooths out the jump in the speech and makes it look like a continuous talk. (I just wish thy used it on the voice over….)

At any rate, it should help when you don’t have enough B-roll to cover all those jump cuts.

The second improvement is a massive coloring a grading controller called Lumetri Color Panel. The panel uses a lot of the tech found on Adobe’s Speedgrade, which will allow to have the grading done as part of the “Premiere” part of the workflow. I find that Speedgrade is not easy to master (I personally hate it), and the fact that it is a separate program all together is not helping either, so the fact that it is integrated into Premiere is a big thing for me.

While this is great right here, Adobe did one better, making many many control styles for color corrections and coloring. Maybe the most notable of them all is bringing Lightroom styles sliders into the panel. This should make color handling a lot more intuitive. You still have the Speedgrade color wheels should you want to use them, but I predict many will transition over to the new style.

The panel also allows the more traditional use of curves

There are more improvements coming to the next Premiere release and you can read all about it over at Adobe’s blog post.

Start your color grade with the Infinite Color Panel

« Canon Is All Over 4K; Announces Two Camcorders, a Monitor and a Proprietary Video Format
Quick DIY Tips To Boost Your Props And Set Building Game While Working On A Budget »