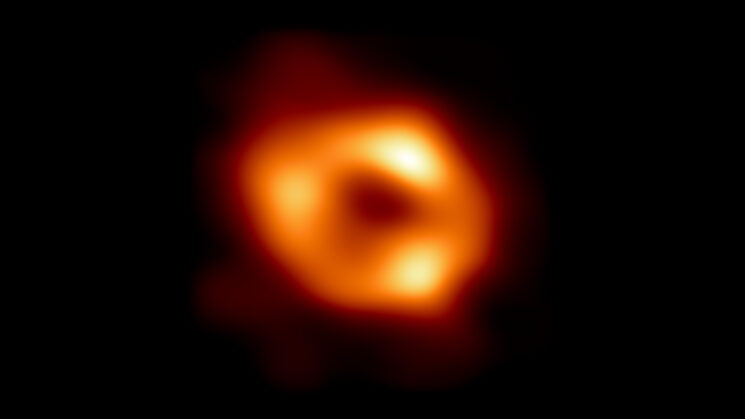 Astronomers have unveiled the first image ever of Sagitarrius A* (Sgr A*), the enormous black hole at the centre of our own Milky Way galaxy. The image was created by a global research team called the Event Horizon Telescope (EHT) Collaboration, using observations from a global network of radio telescopes.

The image is important and long-anticipated. Scientists had previously recorded stars orbiting around something invisible, compact, and very massive at the centre of the Milky Way. This strongly suggested that this object is a black hole, and the image is the first direct visual evidence to confirm this theory.

So how do you photograph a black hole? Obviously, we can’t see the hole itself, because it’s, well, a hole and it’s black, and it has such a strong gravitational pull that not even light can escape it. But we can see what surrounds it. Glowing gas around the black hole reveals a particular pattern: a dark central region (called a “shadow”) surrounded by a bright ring-like structure. What EHT is actually capturing is the black hole’s shadow against the backdrop of that glowing gas and dust.

“Until now, we didn’t have the direct picture confirming that Sgr A* was indeed a black hole,” said Feryal Özel, an astronomer at the University of Arizona and member of EHT during a press conference.

The new image captures light bent by the powerful gravity of the black hole, which is four million times bigger in mass than our Sun. The black hole is about 27,000 light-years away from Earth, so to us viewing it from here it looks absolutely tiny. According to the Event Horizon Telescope group, a single telescope would have to be the size of Earth to take this image by itself.

Obviously, this wasn’t really feasible, so scientists came up with an alternative method. The EHT is an array of radio dishes spread out across five continents. The radio telescopes all work together to observe the same object, behaving as if they are one giant planet-sized telescope. The scientists then put together the data to create a single image.

But it’s an incredibly complicated process. Caltech astronomer Katie Bouman, likened it to “listening to a song being played on a piano that has a lot of missing keys.”

The image follows the EHT’s 2019 release of the first image of a black hole, called M87*, at the centre of the more distant Messier 87 galaxy. However, capturing the black hole in our own galaxy was more difficult, even though it was closer than the M87*. Because the Sgr A* hole was smaller the gas moving around it completed a full orbit in a matter of minutes so that the brightness and pattern of the gas were changing rapidly while they observed it, “a bit like trying to take a clear picture of a puppy quickly chasing its tail” says EHT scientist Chi-kwan (‘CK’) Chan.

The image of the Sgr A* black hole is an average of all the different images the team created, revealing the black hole at the centre of our galaxy for the first time. More than 300 researchers from 80 institutes around the world make up the EHT Collaboration. The team worked rigorously for five years, using supercomputers to combine and analyse their data, all while compiling an unprecedented library of simulated black holes to compare with the observations.

“We were stunned by how well the size of the ring agreed with predictions from Einstein’s Theory of General Relativity,” said EHT Project Scientist Geoffrey Bower. “These unprecedented observations have greatly improved our understanding of what happens at the very centre of our galaxy, and offer new insights on how these giant black holes interact with their surroundings,” he adds.