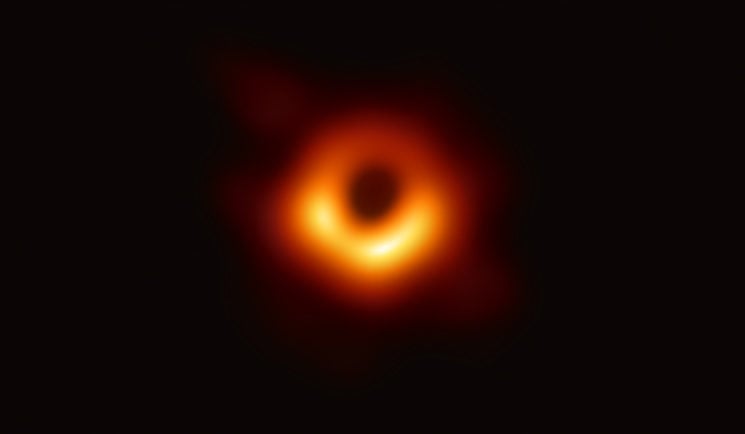 For the first time ever, we can see a photo of a supermassive black hole. National Science Foundation and Event Horizon Telescope captured the gigantic black hole and its shadow at the heart of distant galaxy Messier 87. And today, they shared their impressive image with the world.

The Event Horizon Telescope (EHT) is made of an array of eight ground-based radio telescopes, and it was designed especially to capture images of a black hole. As you can probably imagine, it took an incredible amount of work to capture this photo. There were decades of observational, technical, and theoretical work. Telescope facilities around the world needed to be synchronized to get the necessary data. Petabytes of raw data from these telescopes were combined by highly specialized supercomputers. And of course, it took over 200 researchers who stood behind all this work.

But today, in coordinated press conferences around the world, EHT researchers revealed that their mission has succeeded. We have the first visual evidence of a supermassive black hole’s existence.

National Science Foundation explains that the image reveals the black hole at the center of Messier 87, a massive galaxy in the nearby Virgo galaxy cluster. This black hole resides 55 million light-years from Earth and has a mass 6.5-billion times that of the Sun.

Personally, I find everything about this photo awe-inspiring. It’s unbelievable how much effort, knowledge, technology, and resources have been invested in taking it. It’s impressive that this first visual evidence that a supermassive black hole exists. And finally, the very look at the final photo impresses me, reminding me how vast this Universe is and how small we are.

« Here are five funky in-camera effects you can create with dollar store items
Sigma is releasing 11 L mount lenses, but the MC-21 EF to L Mount adapter is coming first »