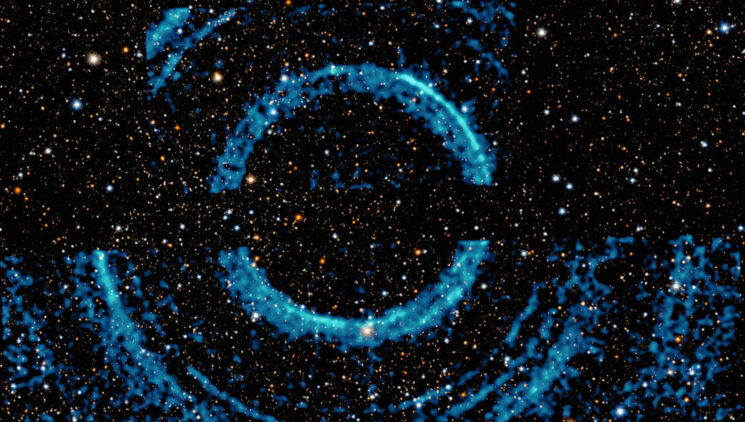 There is a  lot of mystery surrounding black holes. Every time there’s a new photo or we learn something new about them, it makes my heart beat a little faster. NASA has recently shared a spectacular image showing giant rings of light surrounding a black hole. It looks like something out of a sci-fi movie, which is fantastic on its own. But knowing that it’s a real photo… It truly makes your imagination run wild.

This spectacular image was shot using NASA’s Chandra X-ray Observatory and Neil Gehrels Swift Observatory. It’s an X-ray photo, and it actually uses a similar principle to the X-rays we’ve seen in doctor’s offices and at airports, as NASA explains. This black hole is part of a binary system called V404 Cygni, located about 7,800 light years away from Earth.

“The X-ray images of the giant rings reveal information about dust located in our galaxy,” NASA writes. “The black hole is actively pulling material away from a companion star — with about half the mass of the Sun — into a disk around the invisible object. This material glows in X-rays, so astronomers refer to these systems as ‘X-ray binaries.'”

Someone posted this image on Reddit, and it has sparked tons of comments, speculations, and of course, lots of humor. Some say that these rings look “intelligently made,” some compare it to a Dyson sphere or to Halo. As I said, the photo real makes our imagination run wild. And just imagine: there are 100 million black holes roaming around our galaxy only.