Astronomers estimate that there are 100 million lonely black holes drifting through our galaxy. Despite such a huge number, they’re virtually invisible and extremely difficult to detect.

But now, for the first time in history, NASA’s Hubble Space Telescope has managed to help scientists to identify one of these lonely wanderers. They used Hubble’s data to identify and even measure the mass of the black hole wandering through our galaxy.

NASA explains that this newly detected wandering black hole is about 5,000 light-years away from us, in the Carina-Sagittarius spiral arm of our galaxy. Its discovery is groundbreaking for several reasons. First, it allows astronomers “to estimate that the nearest isolated stellar-mass black hole to Earth might be as close as 80 light-years away,” as NASA explains. Also, it was the first time astronomers used Hubble for a project like this.

You may wonder why it has never happened before considering that Hubble has provided us with so many important and historic photos. Well, since it operates by collecting the light emitted from celestial objects, it can’t photograph a wayward black hole. It doesn’t emit any light. Its gravity is so strong that nothing can escape from it – not even light. However, it warps space which then deflects and amplifies starlight from anything that momentarily lines up exactly behind it. Hubble used the light of a star right behind the black hole to detect its position and mass.

According to NASA, this black hole weighs seven solar masses and it’s wandering through space at the whopping 100,000 mph. 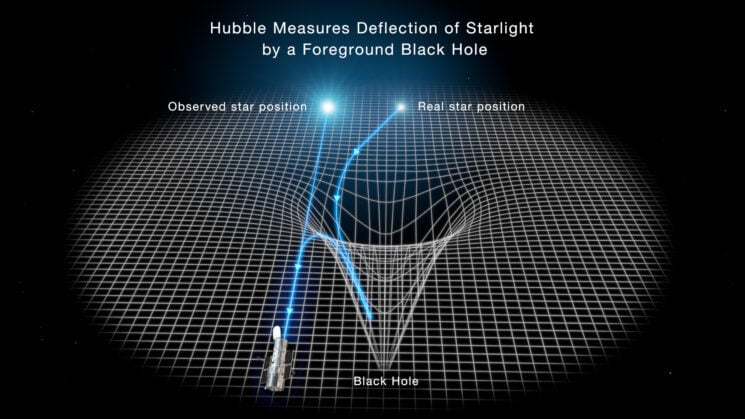 This illustration reveals how the gravity of a black hole warps space and bends the light of a distant star behind it. A black hole is the crushed remnant of a massive star that exploded as a supernova. The black hole traps light due to its intense gravitational field, hence it cannot be seen directly. The black hole distorts the space around it, which warps images of stars lined up almost directly behind it. This offers telltale evidence for the existence of lone black holes wandering our galaxy. The light from a background star is deflected and brightened by the black hole’s intense gravitational field. The Hubble Space Telescope goes hunting for these black holes by looking for distortion in starlight as the black hole drifts in front of background stars.
Credits: NASA, ESA, STScI, Joseph Olmsted 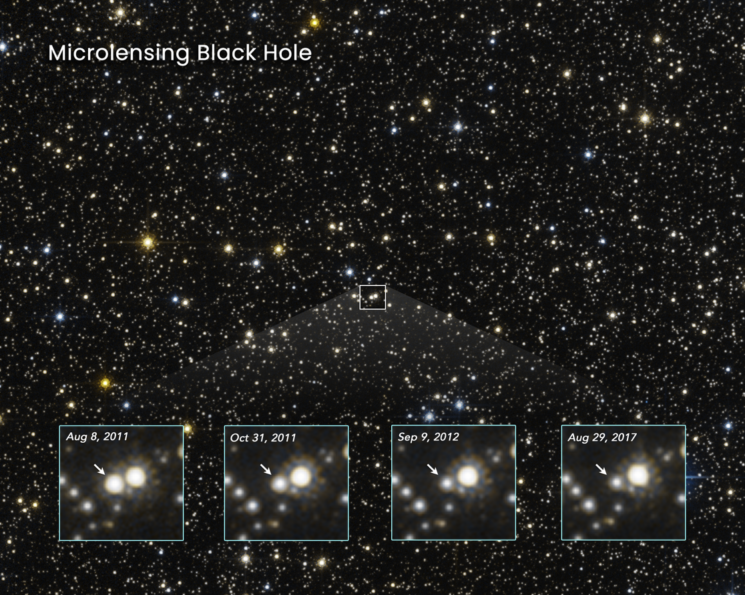 The star-filled sky in this Hubble Space Telescope photo is located in the direction of the galactic center. The brightness of stars are monitored to see if any change in apparent brightness is made by a foreground object drifting in front of them. The warping of space by the interloper would momentarily brighten the appearance of a background star, due to an effect called gravitational lensing. One such event is shown along the four close-up frames at the bottom. The arrow points to a star that momentarily brightened, as first captured by Hubble beginning in August 2011. This was caused by a foreground black hole drifting in front of the star, along our line-of-sight. The star brightened and then subsequently faded back to its normal brightness as the black hole passed by. Because a black hole doesn’t emit or reflect light, it cannot be directly observed. But its unique thumbprint on the fabric of space can be measured through these so-called microlensing events. Though an estimated 100 million isolated black holes roam our galaxy, finding the telltale signature of one is a needle-in-haystack search for Hubble astronomers. Credits: NASA, ESA, and Kailash Sahu (STScI); Image Processing: Joseph DePasquale (STScI)

NASA released an illustration that shows an artistic representation of the lonely black hole wandering through the Milky Way. I couldn’t stop staring at it, so I’m sharing it here with you. 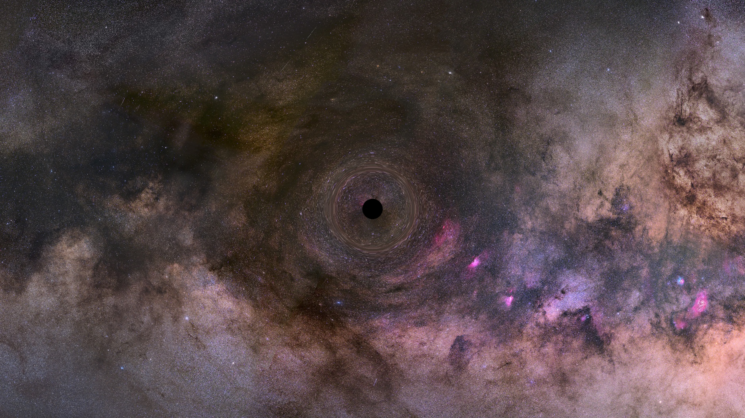 Make sure to read more about this on NASA’s website. Ad worry not – there’s a lot of space between us and this roaming black hole.

Hubble photo shows that Milky Way will collide with Andromeda galaxy. Are we doomed?

« Laowa has officially launched the new $499 90mm f/2.8 2x Macro for E, L, RF and Z mount cameras
The Atoll is a unique take on the traditional tripod lens collar for easy vertical shooting for stills and video »