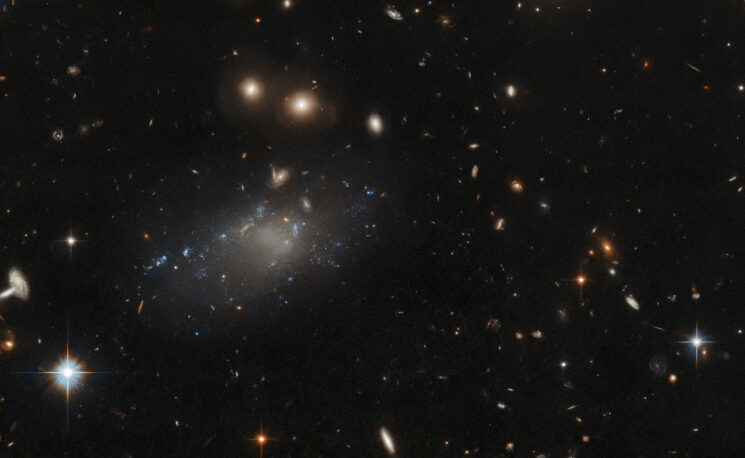 This week the Hubble telescope has captured a galaxy that NASA has described as “an oddity“. The catchily named GAMA 526784 is an ultra-diffuse galaxy which according to NASA “appears as a tenuous patch of light”, or ‘a bit fluffy’ in layman’s terms.

The ‘fluffy’ galaxy is part of the Hydra constellation of stars and is around 4 billion light-years away from Earth. NASA writes that this type of galaxy has “a number of peculiarities”.

The first of these unusual qualities is that their dark matter content can be either extremely low or extremely high. “Ultra-diffuse galaxies have been observed with an almost complete lack of dark matter,” says NASA, “whereas others consist of almost nothing but dark matter.”

“Another oddity of this class of galaxies is their anomalous abundance of bright globular clusters, something not observed in other types of galaxies,” they continue.

Astronomers were able to study the GAMA 526784 in high resolution using Hubble’s Advanced Camera for Surveys. They used ultraviolet wavelengths which helped to see the sizes and ages of the star-forming regions of the galaxy.

Ultra-diffuse galaxies can be a similar size as our Milky Way galaxy, but they contain just 1% of the number of stars. This sparseness in terms of stars is what makes them appear to be ‘fluffy’. They are classed as extremely low luminosity galaxies and this lack of luminosity is due to a lack of star-forming gas.

Obviously, I don’t have the answer here, not being an astrophysicist, not even an armchair one! However, the images we see from Hubble never fail to amaze me.