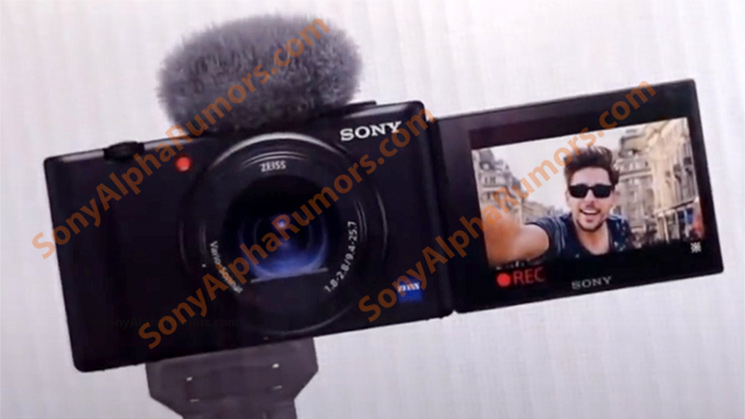 The first images of the upcoming Sony ZV-1 have leaked, courtesy of Sony Alpha Rumours, and they show an interesting looking camera that would suggest that Sony is finally starting to wake up the massive vlogging market.

Sure, Sony has had a go in the past with strange handle contraptions and finally adding a microphone socket to last year’s RX100 VII. But finally having a flippy out LCD should make life much easier. Oh, and it also has a hotshoe for your top-mounted microphone.

Other than the flippy out LCD, it looks a lot like the Sony RX100 VII. But that small change in which direction the LCD flips around to the front can make a big difference. For a start, they’re generally a lot quicker to deploy, but they also mean that the top of the camera is clear for mounting either a microphone or a microphone receiver, in the case of something like the Rode Wireless Go.

Although they do look quite similar, there are some other outward differences between the ZV-1 and the RX100 VII besides the LCD and the hotshoe. Primarily those differences are on the top, as you can see when comparing the leaked image above to the top view of the Sony RX100 VII below. Being more video-oriented, the mode dial has disappeared, moved to a simple button. It’s been replaced by what looks like a big record button, making it easier to start and stop your recording at will.

When it comes to the actual specs, nothing is confirmed, but SAR believes that it will have a built-in neutral density filter – common to video cameras, but not so much with stills cameras. This will be fantastic for vloggers, travel shooters, and for shooting videos on vacation (when we’re allowed to go on vacation again) if you’re regularly moving between indoor and outdoor locations or other rapidly changing lighting conditions.

They say that it will contain a 20-megapixel 1″ sensor, like the RX100 VII, but will feature the more modest 24-70mm equivalent focal length range of the RX100 V. It should also come with all of the usual autofocus features we’ve come to expect from Sony like Eye AF, object detection, etc.

It’s an interesting looking camera, in principle, and I’d be curious to see exactly what price point Sony releases it at. The RX100 series popularity seems to have reduced amongst vloggers over the last couple of years, as other less expensive options become more capable. With the price tag the RX100 series cameras demand now vs the cost of the Canon G7X Mark III and versatility of some of Panasonic’s less expensive MFT cameras, it’s not much of a surprise.

If the ZV-1 is priced too high, Sony might find that people will simply go for more capable options at that price point, or opt for lower-cost alternatives.

An official announcement is rumoured for May 26th. We’ll let you know when we hear more.