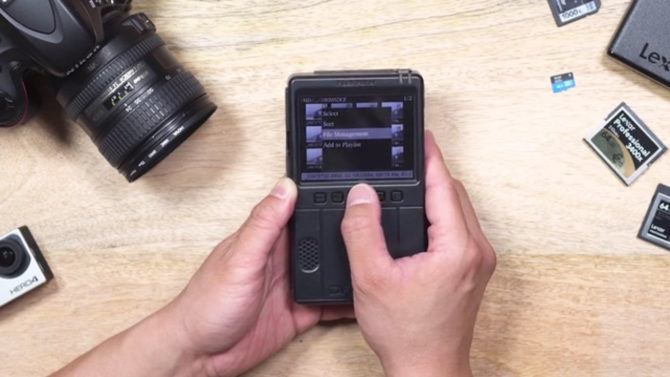 I say “finally”, there used to be a number of them. Back when I shot a pair of D100 bodies back in 2002, I used a 20GB Super Digibin 2 to backup my massive 128MB CompactFlash cards while still out shooting. It was slow and the battery didn’t last very long, but it was reliable and it worked. It allowed me to backup or unload my cards before I got anywhere close to home.

In recent years, such inexpensive and readily available backup solutions seem to have disappeared. There are a few out there, but many are either way out of most budgets, offer very little in the way of user experience, or just aren’t very good. New startup DFi Gear is looking to change that with the Flash Porter. It’s basically a hard drive (or SSD) in a small case with CF, SD and microSD card readers and a great big LCD screen to back up while you’re out and about.

Already fully funded with over a week left, it’s a great looking solution to a very common problem. Many of us have to deal with the extra weight of laptops and USB hard drives (as I do now) to backup on location. This could fit in your pocket (ok, a big pocket).

It also has a bunch of great features to overcome some of the downfalls of its predecessors. When I used the Digibin to backup, it was mostly to free up the cards so I could keep on shooting. I still didn’t really have a “backup” as the only copy of many images was on the Digbin itself. Short of carrying two Digibins (and putting up with the ridiculously slow transfer speeds) I had no other option.

The Flash Porter lets you plug in an external hard drive and duplicate the device’s contents. It does have to be exFAT or FAT32 format, though. No NTFS or Mac Extended (HSF+) yet.

Memory cards are so cheap these days that you usually don’t need to copy their contents to free up the room and keep shooting. It’s easier to just have a whole bunch of cards. But this is an invaluable option for redundancy. Whenever I meet up with the DIYP crew to attend shows or document events, we each take home at least one copy of all footage recorded. This helps to ensure nothing gets lost. 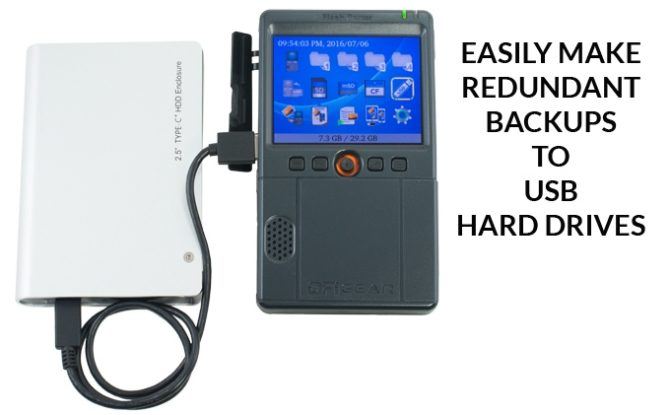 You also don’t have to worry so much about the battery life. With my Digibin, I’d get to copy maybe 3 or 4 full 128MB cards before the battery died. Sure, now we have other options like USB batteries to charge our devices in the field, but it’s a lot quicker to just carry spare batteries. A single battery lets you copy up to about 250GB of data from your card to the device. The battery panel opens up to let you access and easily swap out the battery to keep on going.

It’ll also let you backup from your phone via USB cable, or from other memory card formats like CFast and XQD through a card reader. As well as the expected CF and SD card readers, it also has a microSD slot, which can be very handy. Given how many action cameras, drones and other devices use microSD, it’s a very welcome addition.

When my Digibin could no longer keep up, I just abandoned the idea of backing up on location for a few years. Then I built my own Linux based system using a CubieTruck (like a Raspberry Pi but with a built in SATA port), a 7″ touchscreen LCD and a USB card reader. When it worked, it worked well, but it was cumbersome to set up sometimes, especially at rough locations.

Lately, I’ve switched to using an Asus Transformer Book, along with a G-Drive ev ATC & USB card reader. It’s a far more useful solution than the Frankenstein system above. Especially so when I can also use the Asus to remote control cameras on location. It’s still a bit weighty, though, overall. So, I’ve constantly been looking for a good small portable backup solution ever since my Digibin’s demise. So far, I’ve not really seen anything that impressed me until the Flash Porter came across my screen.

There’s still 10 days left on the Kickstarter campaign, where you can pick one up right now for as little as $179 (with a 500GB HDD). For what it is, that’s a ridiculous price. It’s available in 500GB, 1TB and 2TB capacities in both HDD and SSD flavours. Obviously, the larger the capacity, the higher the price, and SSD is more expensive than HDD.

I think I know what’s going on my Christmas list. How about you? Does this look like an appealing location backup solution for you? What do you use for backups on a shoot at the moment? Do you use anything? Or do you just use dual card slot cameras and shoot to both simultaneously? Let us know in the comments.

Backup in the field to Seagate’s new 5TB drive, the largest portable hard drive ever

« Headshots – A view from the other side of the lens – 5 lessons I learned as a subject
Why does bad framing work? Looking beyond the rules of composition »