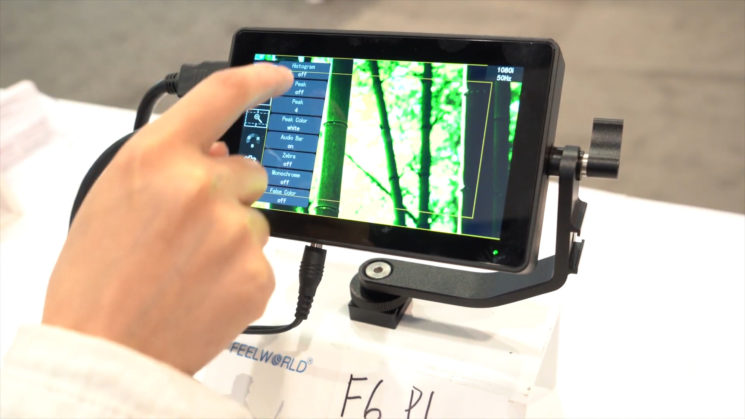 Feelworld’s range of entry-level monitors have become quite popular over the last couple of years. Although they don’t offer all the bells and whistles we might find on monitors from Aputure and SmallHD, they’re plenty good enough for many hybrid shooters and specific use cases where those bells and whistles might be overkill.

The Feelworld F6 has been a very popular monitor, but Feelworld was showing off a new F6 Plus at NAB 2019, so we spoke with them to take a closer look and find out more.

Like the F6, the F6 Plus is a 5.7″ Full HD HDMI on-camera monitor that supports up to 4K signals. Where the F6 Plus has a major advantage over the original F6, though, is that it’s controlled via a touchscreen interface, rather than simple buttons on the outside of the unit.

Like the F6, the F6 Plus does not have a vectorscope or RGB parade, but it does have a live histogram, focus peaking, false colour and many other basic features required for shooting video. It also supports 3D LUT files to give you an idea of how your footage will look when corrected rather than just showing the raw LOG or other flat footage.

It’s an HDMI monitor designed to go on top of your camera. And being in such close proximity to the camera, the F6 Plus offers a DC output socket to attach a cable to your camera. This way, you can power everything from a single Sony NPF style battery on the back of the screen rather than having to deal with multiple batteries for multiple devices.

Despite adding a touchscreen LCD, the price isn’t expected to jump that much over the existing Feelworld F6 monitor. The F6 Plus should come in at around $210, and will be available soon.