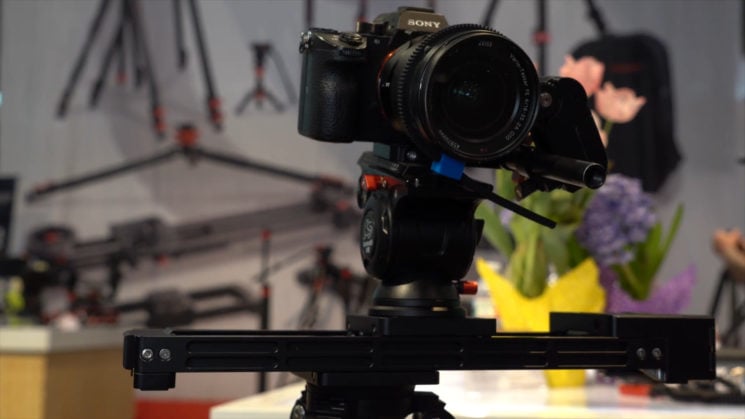 There are quite a lot of sliders out there these days, and many of them are excellent for timelapse, but quite a few of them have one big problem when it comes to video. That problem is noise, which can make it difficult to not only get a good sync track on the camera, but the slider can actually be picked up by dedicated microphones for external audio, too.

We’d heard that the new Shark Slider Nano from iFootage, though, is whisper quiet. We wanted to hear this for ourselves, so we paid them a visit during NAB 2019 to find out more.

The Shark Slider Nano is a new design for iFootage. Rather than just having the carriage go from one end of a rail to the other, like the Shark Slider Mini, the Nano takes the approach of having the carriage, rail and tripod mount all work in conjunction to give you a slide length that’s approximately double the length of the slider unit itself. It’s still in the prototype stages, with a projected release date of sometime around the end of August or beginning of September.

The trick to the Shark Slider Nano’s silence is the use of brushless motors. Many camera sliders user stepper motors, which can be quite loud, but brushless motors are often extremely quiet, especially at the kinds of speeds you need for a video or timelapse camera slider.

So, is it as quiet as we’d been led to believe? Well, you can see how closely I’m holding the microphone to the slider during the interview above. Can you hear the slider whirring away? I can’t.

One great feature of the Shark Slider Nano is that the camera will also pan while the slider’s moving. A separate motor inside the carriage rotates whatever head you’re using with the camera sitting on top. Both the linear motion and the pan feature can be controlled either through the interface built directly into the end of the slider or via the use of a mobile app.

It also supports stop motion animation. So, if you need a camera slide while animating a scene in front of the camera, you can tell it to take a shot, make all your adjustments, and then move & take another shot, and so on until your sequence is complete.

As mentioned, this is still a prototype, expected to be released around August/September 2019. But if you want to find out more, check out the iFootage website.