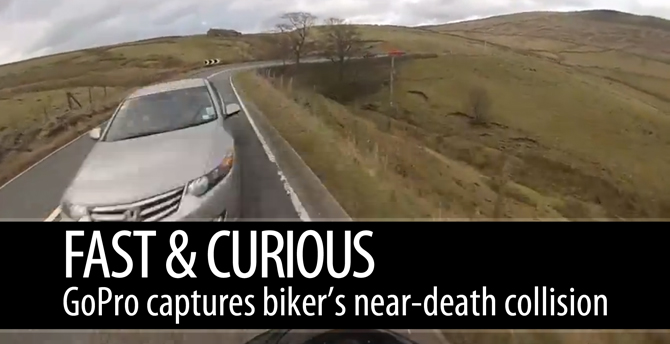 Perhaps it can be said that I simply like to toy with death a little less than the average person, but you can never accuse biker Jack Sanderson of that. While out for a relaxing, spring-time ride (okay, so he’s weaving across both lanes of traffic at high speeds on very winding roads, and I’m totally confused as to which vehicles are coming or going), the 21-year-old Knutsford, Cheshire resident passed two other bikers, dropped around a turn, and missed a potentially-deadly 60mph head-on collision with an oncoming car by inches, flying off the road and tumbling 40 feet down an embankment.

Watching the video captured from his GoPro helmet cam with my Romanesque fascination for the gory, I expected to witness a life-altering moment in young Jack’s existence. However, with no visible signs of serious physical damage, Jack picked himself up, brushed off a few crumbs of earth, and finished his still-unspilt martini* while climbing back up to the road. (Only a mild concussion was suffered by our hero.)

The moral of the story? If you’re gonna do something crazy and potentially stupid, at least document the hell out of it.

*This is how I imagined it, at least.