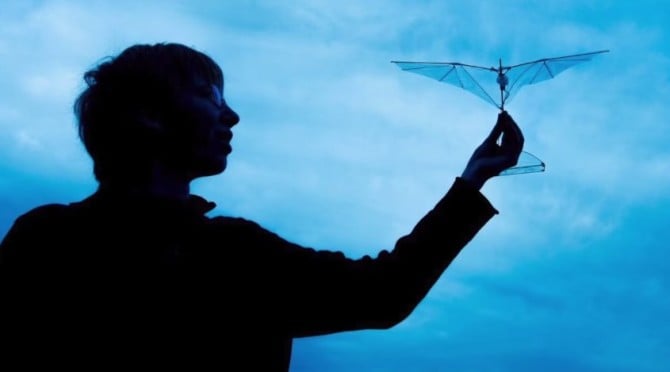 If you’ve been following the drones vs. things saga here on the blog, you know that drones are almost losing the fight when they stumble into things (or mad chimps). A new technology developed in Stanford university aims at changing this and allowing drones to keep flying even after they collide with a solid object (Or Kangaroo).

The general form factor that drones are built with today, are stiff and cannot sustain mid-air impact. They rely on collision avoidance at best, flying at high altitude as a failsafe or having no collision control at worst.

The idea is borrowed from watching how birds handle collision recovery.  The fact that birds’ wings are flapping and flexible allows birds to recover from a collision after one flap.

As much pre-processing and sensors as you can do, you might still occasionally hit things and this could be quite detrimental. And so if you can be more robust when hitting something you could potentially go into a more risky environment

The key to overcome those collisions was designing a drone to flap like a bird. A birds’ flapping motion creates a centrifugal force that keeps it flying even after it collides with something, recovering in a fraction of a second over the course of a single wing beat.

Here is the cool thing, up until a short while ago, this would not have meant much for photographers, as the shake from the flapping motion would have rendered any footage unusable and any photo too blurred. But the last few years saw amazing improvements in gimbal technology and in airborne gimbals in particular so it is just a matter of time until someone will combine those two technologies to provide collision resistant airborne camera.

Here are some slow motion clips of the wings recover from various impacts.

P.S. if you want the full technical analysis you can read Amanda K Stowers and David Lentink’s paper in Bioinspiration & Biomimetics called Folding in and out: passive morphing in flapping wings.