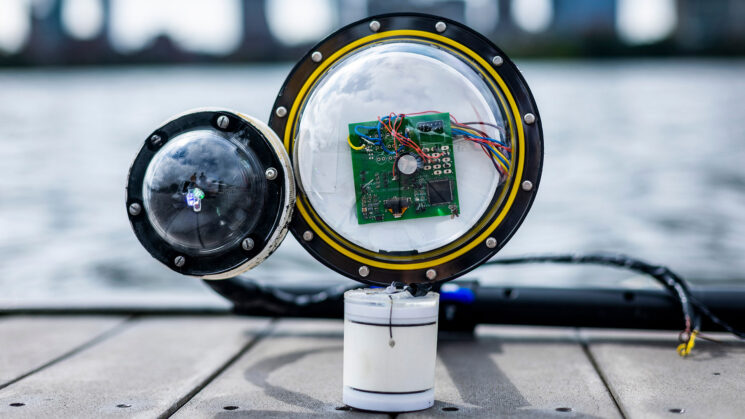 According to scientific estimates, more than 95% of Earth’s oceans have never been observed. As SciTechDaily points out, this means that we’ve seen less of our own planet’s oceans than we have the surface of Mars. The biggest challenge in exploring the oceans, though, is powering cameras, particularly for a lengthy amount of time. They typically have to be tethered to research vessels or require regular trips out to swap batteries.

Researchers at MIT, though, have taken a pretty big leap in overcoming this hurdle by developing a battery-free, wireless underwater camera that they say is around 100,000 times more energy-efficient than other underwater cameras. It shoots photos in colour, even in the deep, dark underwater depths and transmits them wirelessly through the water.

Going battery-free is certainly going to be a big bonus for cameras like this, but how does it get its power if it doesn’t have batteries? It uses sound. It converts the mechanical energy of sound waves travelling through the water into electrical energy that powers the imaging and communications tech inside the camera. This ingenious solution, not only powers the camera but also allows it to wirelessly transmit the images, too.

Traditional wireless systems pretty much fall dead underwater. Just ask anybody who’s tried to control an action camera under the water from above its surface using a smartphone. Even underwater drones typically tether to a floating device of some kind which contains the GPS and wireless hardware for communications. This one, though, uses sound waves to transmit the image data back to a receiver in order to reconstruct the image at the other end.

Sound data can be transmitted great distances through water. The low-frequency sounds created by whales, for example, can be heard hundreds or even thousands of miles away. This camera isn’t transmitting anywhere near that sort of range, topping out at around 40 metres (130 feet) but taking the cue from nature and actually being able to implement it into such a system is a great achievement.

The general idea when developing the camera was to create something with minimal hardware and very low power consumption that could harvest its own energy underwater. Piezoelectric transducers are used around the camera’s exterior to generate energy. They produce an electric signal when a mechanical force (like a sound wave) is applied to them, like the teeny tiny signals generated by microphones.

The transducers pick up sound waves from just about any source. A passing ship, for example, or marine life. It stores the energy a bit at a time and once it has generated enough to power everything up, it shoots a photo and transmits it back to the receiver.

What’s particularly interesting about the setup is that while it creates colour images, it does so using a mono-greyscale sensor. This is where the darkness levels deep in the ocean offer an advantage. They also had to develop a lighting system for the camera, which they did utilising red, green and blue LEDs. It shoots three images, each illuminated by either the red, green or blue lights and then shoots three photos that are then composited together to create the final colour image. This is actually a photography technique that’s been around since at least 1861, and it’s being applied very cleverly here to overcome the limitations of the greyscale sensor. 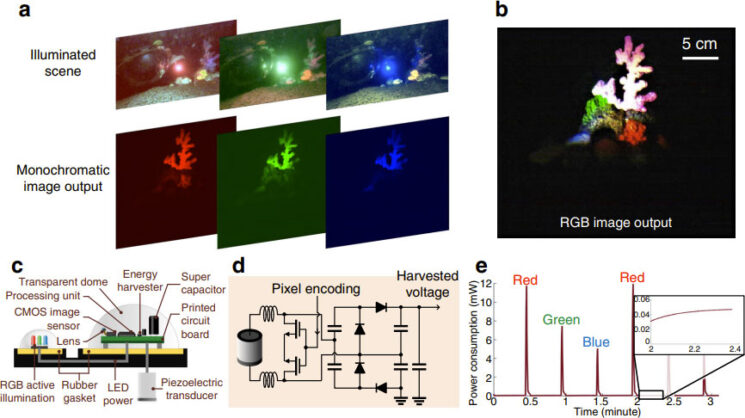 At the moment, the camera is a working prototype, but now that it’s proven its worth, the engineers plan to enhance the device so that it’s more practical for use in real-world situations. They hope to increase its memory to capture photos in real-time, stream images or potentially even shoot video. Extending the range is also on the list of goals, as 40 metres limit its potential applications quite a bit.

It’s an exciting technology not just because it’s pretty innovative but because it can potentially show us a lot that we didn’t know about our planet and the life that inhabits the deep, dark oceans. If you want to find out more about it, you can read the complete paper here.