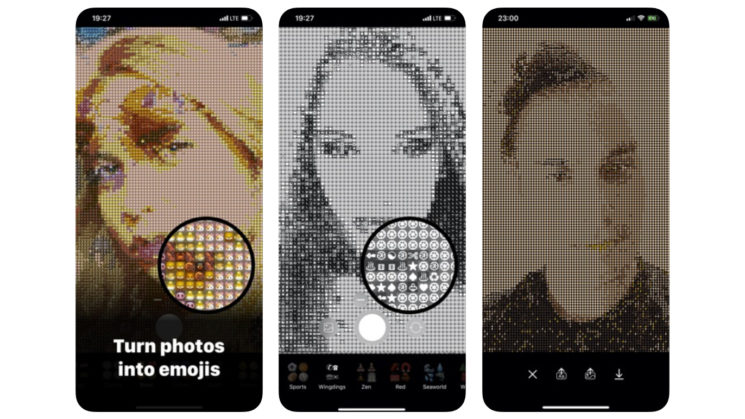 Apps like this are kind of an oddity. On the one hand, they make you despair for humanity and the levels to which it’s sunk. Yet, at the same time, they really can give you a good laugh and cheer up your otherwise boring day. The latest in this long line of horrific but amusing apps is Emojivision. It’s an app which turns your photos into mosaics made up of emojis.

The idea of photo mosaics, making an image from hundreds or thousands of smaller versions of other photos is not a new idea. But to do it with emojis? Well, that’s an odd one. But now you can do it from the comfort of your iPhone using the Emojivision app. Yes, unfortunately, Android users won’t be able to benefit from this particular technology, sadly.

The app itself is free, although it has an in-app purchase for $2.79 that unlocks a bunch more emoji packs. It works by breaking down the image from your iPhone’s camera into a basic colour palette. It then looks at the emojis to see which most closely matches these colours and constructs an image to fit. And it can do it in real-time at 60  frames per second.

Even if we forget the frivolous nature of the app for a minute, the technical ability to process it that quickly says a lot about those tiny supercomputers in our pockets. And if you want to look into the technical side of things, the code is freely available on GitHub.

It’s stupid, it’s silly, and you’re all probably going to be seeing far too many of these in the coming weeks over social media. But if you want to check it out and annoy your friends, you can download Emojivision in the Apple App Store.

New Emoji Standard Is Finally Adding a Camera With Flash