So, the holidays have rolled around once again, and sometimes we like to look at your old, but memorable, pictures from years gone by. But, having converted my photographic efforts to a digital, I continue to postpone (again) the inevitable, and disagreeable job of converting the old negative or slide collection into an acceptable digital format. This universal reluctance to bring your photos into the 21st Century is usually the caused after finding out the apparent complexity of the project or, more oft than not, the cost of the equipment.

For the past 12 years, I’ve been happily using digital photo equipment, forever clinging to the distant hope that someday I would be able to view my photographs and slides on the TV or the computer screen. I well remember how it used to be fun to drag out the slide projector and display the slides. It has, unfortunately, become less and less convenient that without clear wall space to project on, it’s just not worth the effort as the old 6ft. “pull down” projection screens just don’t cut it any more. Besides the set up of projection equipment, darkening the room and the other rigmarole one has to go through to look at slides, has driven the ‘fun’ right out of the effort so that I almost never look at them anymore. I took thousands of pictures during my travels and a lot of them were quite good. 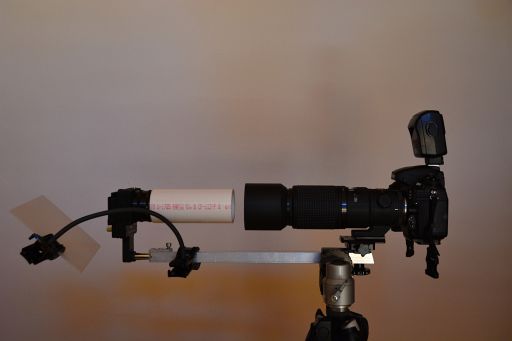 I have looked into several different ways of converting my slides to digital. They either involve sending to a service or using a slide scanner, both resulting in a fairly substantial investment. I couldn’t justify that which would essentially be for a single use only. I’ve seen articles on how to use your digital camera to duplicate your slides, but for one reason or another they really didn’t seem to work out very well.

So, since I seem to have amassed a variety of camera equipment over the years, I decided to refine what other people have suggested, and make a truly accurate method to convert your slides by using your own digital camera.

It is best to have a macro lens that has the ability of doing 1:1 reproduction ratio. With the high pixel count found on some of the newer cameras, you can get away with less than the 1:1 necessity. So if you use three quarters of the center area, and you crop it, you still have a fairly substantial file that will render excellent resolution, bringing you closer to the resolution of the original film.

IMPORTANT: You also need to have some method to stabilize/immobilize the camera aimed at the target slide. Failure to perform this relatively simple task of vibration isolation between the two elements, will result in unacceptable blurring. 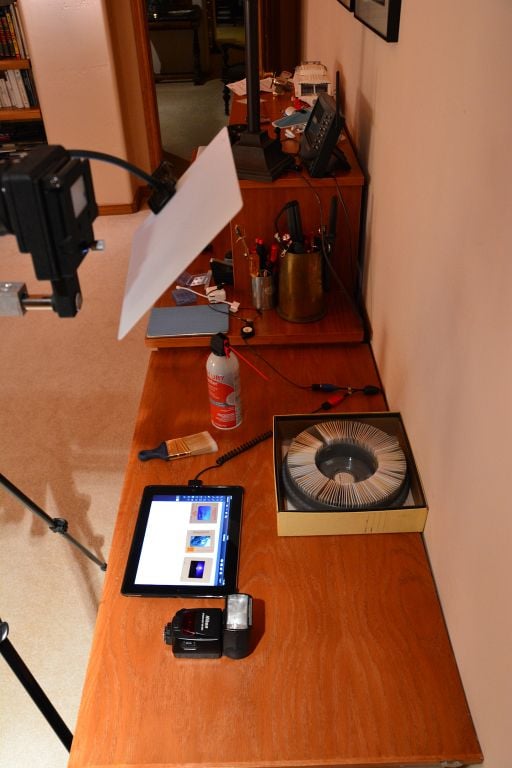 Since I use the Nikon system, it has this CLS (Creative Flash System) flash system (Canon has a similar system). In this case I use the SU 800 Commander unit to control the SB 800 flash unit as a remote slave, some camera’s built in flash will also act as commander for a slave unit. This gives fairly good TTL flash control to give pretty close to a perfect exposure. Occasionally, you will need to tweak it up or down 1/2 to 1 stop flash correction to get the proper light levels on very dark slides. I’m using a

200 mm macro lens in this case (its what I have) but it will work just as well the 60mm or the 105mm. I found it was very hard to focus the unit on the slides through the viewfinder and it turns out that the focus is extremely critical. It was part of the problem I have with attempting previous methods. Since my camera has Live View, it simplifies the problem. You simply pick something like twigs flowers or lines in the photo and enlarge it to the maximum level that your camera allows. Then focus very finely on that part and shoot the picture. 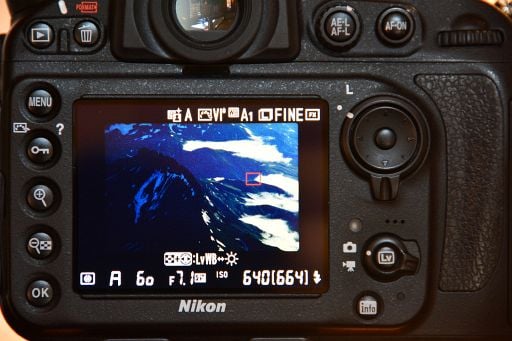 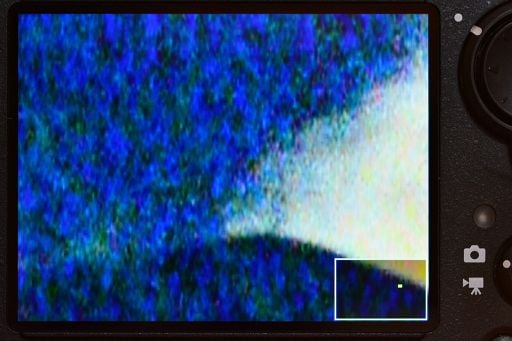 The other thing I found really handy with using an iPad as a lightbox. It’s kind of hard to preview your slides by holding them up to a lamp. But if you set your iPad to give you a screen with a pure white background, You simply place a slice on top the iPad and you can see them quite clearly. The other two items you’ll need is a soft brush and a can of compressed air of some sort. Slides tend to hold dust very tightly. So you need to brush them with the soft brush on both sides and then use the canned air to blow both sides on each slide prior to photographing them. This eliminates a lot of dust touch up in Photoshop. I found a really nifty brush at my local Home Depot, a nylon Shorty and it doesn’t excellent job cleaning the slides (or your camera gear in general) and it’s really cheap. A pair of lint-free gloves would also be an asset. 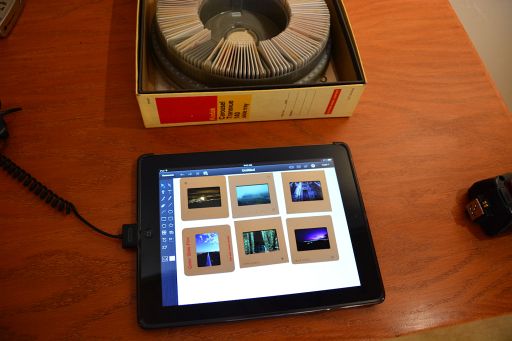 You’ll still have to import your slides into a Photoshop like program for cropping and any straightening if your rig it’s not perfectly aligned. It helps to use a carpenter’s square to check that both the camera and the side duplicator are perpendicular to each other. Macro lenses have a very narrow depth of field, so you want everything to be perpendicular or you have out of focus areas.

You can get really fancy and attach your laptop and camera together via the USB port and do the focusing on the laptop, along with storage. There are lots of programs out there that allow you to do this. I find some decent music and perhaps a decent vintage of wine makes this process less boring. It takes a lot of time to do a few hundred slides, so once you get set up you will have to grind away at it for some time.

But the results are worth more than than the effort made.

P.S. Scanning slides? You may want to consult with our other slide scanning tutorial as well.

Scanning Hundreds Of Slides In Minutes

How to build a DIY 35mm slides and negatives copying machine