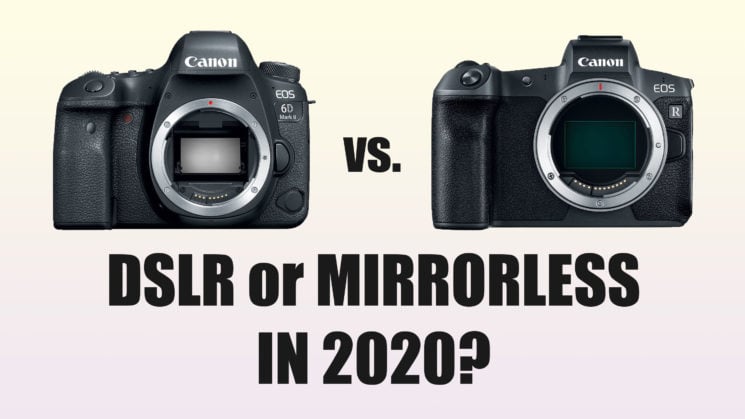 The mirrorless market is undoubtedly getting stronger and stronger. Some photographers argue that this will soon kill DSLR, while the others claim that DSLR won’t be dead any time soon. If you’re just buying a new camera, or your first one ever, it can be tough to decide. In this video, David Manning discusses whether you should buy a mirrorless or a DSLR in 2020. He believes that “you’d be crazy to buy a DSLR in 2020,” so let’s see if you agree with his arguments.

David starts by explaining the build of DSLR and mirrorless so he can compare OVF to EVF. He discusses that looking through an optical viewfinder on a DSLR doesn’t give you the accurate reading of the exposure since the light doesn’t hit the sensor. You have the exposure meter though, but David says that it helps you “a bit” to get the correct exposure.

Looking through an electronic viewfinder of a mirrorless camera, on the other hand, gives you a direct reading of the exposure. In other words, there’s no mirror between the lens and the sensor, so the light hits the sensor and gives you a direct readout of the image you’re shooting. You have a direct preview of the image you’re taking as you change settings, both through an EVF and on the screen.

Now, I must note that the exposure meter doesn’t really help “a bit,” it’s actually quite accurate and I have a relatively crappy DSLR. Also, you can see all the changes in the exposure as you change settings when you switch to Live View on a DSLR. So I personally wouldn’t take these claims as arguments against DSLR, but David has some more.

He goes on that mirrorless cameras are smaller and lighter than DSLRs, which definitely is true. However, the lenses can be quite bulky, so there’s no really that much difference when you put the lens onto the camera.

DSLRs still do have some advantages over mirrorless, as Dave admits. First of all, they still have a longer battery life. Also, they’re more rugged and robust than mirrorless. However, he still claims that it would be “crazy” to buy a DSLR in 2020, and the argument for that is – the future. The thing is, most companies are putting their money and efforts into mirrorless cameras and accompanying lenses. It sure looks like the whole market is slowly turning towards mirrorless systems, and investing in one now is more like investing in the future.

In a nutshell, David advises you to go mirrorless if you’re buying your first camera, or switch systems if you’re a DSLR shooter. Since mirrorless is taking over, he predicts that DSLR will become undervalued and it will be difficult to sell it later.

I think that David gives some good arguments for mirrorless, while I find the others unconvincing. Personally, I wouldn’t switch systems, but most of my reasons are more sentimental than technical. I don’t quite like the “feeling” of watching through an EVF, and I like the robustness of my DSLR. There’s one darn good reason for me to stay with the gear I have: it’s quite expensive to switch systems, especially here in Serbia where mirrorless cameras are still relatively unpopular, hence they’re expensive even used.

But I’m not a professional photographer. I can afford to stick to my old DSLR until it breaks, and even then I’ll probably buy another DSLR. I don’t even think I’ll ever go full-frame. But I’m interested in your thoughts. Professional or not, what do you think: should photographers buy mirrorless or DSLR in 2020?

6 Reasons Why You Shouldn’t Dump Your DSLR for Mirrorless

The DSLR will probably die. Are mirrorless the future of large standalone cameras?

« Follow this tutorial to turn photos into goofy animation
I created this Singapore hyperlapse using 23,000+ photos from a 3-year old smartphone »