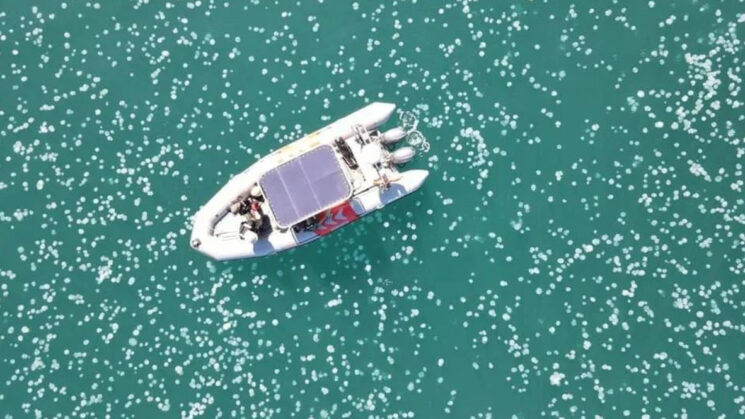 Is it safe to go back in the water? Well, not quite. At least, not if you’re near Israel’s Haifa Bay. Israel’s Nature and Parks Authority captured the incredible drone footage, which shows a small boat surrounded by what almost looks like white flower petals. The white blobs are jellyfish, however.

While it’s not uncommon to find large numbers of jellyfish in the Mediterranean during the high temperatures of the summer, this intensity and size of the swarm are less usual.

“Many things that humans are doing are helping to propagate the jellyfish, including the digging of the Suez Canal, polluting the sea with sewage, climate change and harming jellyfish predators such as sunfish and sea turtles. This is another reason to preserve the sea,” the environmental body said in an Instagram post.

Most of the jellyfish that visit Israel are a migratory, invasive species called Nomad jellyfish. They originated in the Indian Ocean and are thought to reach the eastern Mediterranean via the Suez Canal.

Jellyfish tentacles can sting and inject venom into humans. This usually results in mild to serious discomfort and, in rare cases, lead to extreme pain.

If you do happen to get stung by a jellyfish in the Med, rinse the affected area with seawater and seek medical attention. Contrary to popular belief, it is not recommended to have a friend urinate on the sting.

« Egypt criminalises photos and videos that are offensive to the country
You don’t need a pet? Think twice with Comedy Pet Photography Awards 2022 finalists »