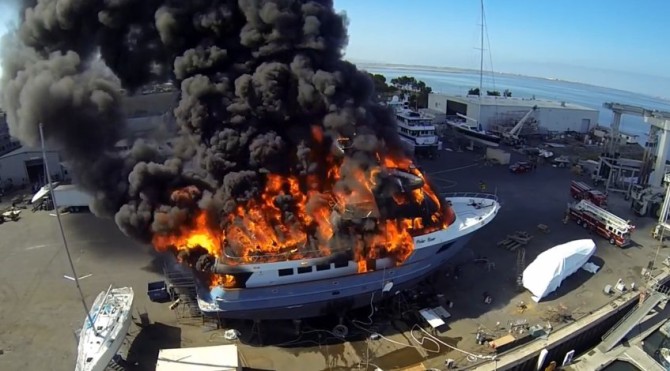 Over the last year tables have turned for drones (or UAVs) as the general mood shifted from looking at the photographic options they provide to the hazards and privacy issues they bring up.

One thing, though remains a strong point for UAVs – capturing news from high angles.

Last Friday was say one of the world’s beautiful Yacht’s go ablaze and burn down. The 110 foot, $24,000,000 Polar Bear was doing maintenance works in a dry dock at the San Diego-area shipyard, and welding works that went terribly wrong burned the vessel completely.

Captain and film maker Kurt Roll, was running a DJI Phantom with a GoPro nearby and took footage of the event. I am not even sure if it makes me admire the photography or cry in pain. It is not every day that you see $24 million dollars burn down.

While drones do cause headache for some, they are probably still the best way to get footage from a scene on a low budget.

[$24 million yacht goes up in flames via businessinsider]

P.S. Boat owner Larry Jodass told NBC that he was not angry: “Am I angry? No. Anger is not the right word, It was my toy, my wonderful, beautiful piece of equipment. I think it’s the most beautiful boat that ever has been built”

Time Of War Is An Epic Body And Ashes Series [NSFW]