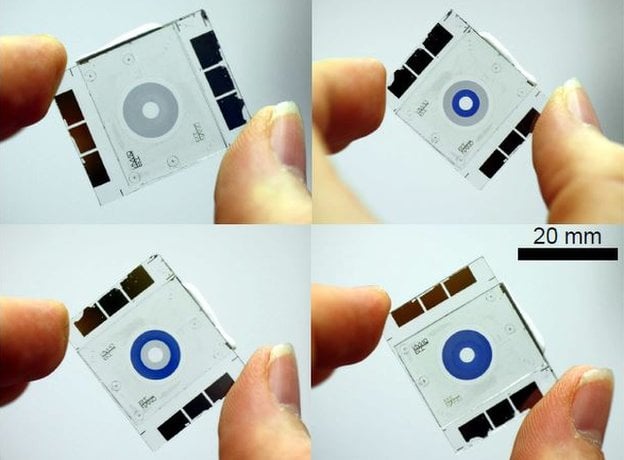 As advanced as smartphone cameras are today, they’re still limited by the size they need to be. As a result, most smartphones have a fixed aperture to save space; the iris itself is mad from fixed blades that set the aperture for each camera. But as always, in a time where mobile devices are so engraved into the modern lifestyle, technology is constantly reaching higher ground. In this case, that higher ground is reached by a new type of iris – one made of chemicals that eliminate the need for physical blades.

Developed by researchers at the University of Kaiserslautern, the chemical iris is meant to look almost like a replication of the human iris itself. There’s two big advantages to come out of an iris like this: the ability to adjust the aperture of the camera itself, and how much smaller the entire thing is than a bladed iris. At a thickness of 55 micrometers, you essentially get a camera much smaller and much less invasive than the ones we find in smartphones today.

“As outlined in a paper from the Journal of Optics, the design features two glass substrates pressed together with an iridium tin oxide (ITO) layer on each. They also both have a thin layer of the electrochromic polymer (PEDOT) which is formed into rings that create the chemical iris.”

With the ability to adjust the aperture, you’re also looking at a brand new way to adjust the depth of focus from a phone’s camera as well. Considering this new technology is still in its research phases at the university, it’ll be a while before we see it reach flagship phones; the amount of advances it’ll take when it does, however, put smartphone cameras a lot more up to par with the DSLR cameras we see today. On the other hand, what succeeds in the lab can also fail in the field – the potential’s there, but we won’t know how well this thing performs until it’s tested out in the open. Check out the research paper covering the iris technology here, and drop by to let us know what you think of the new development!

DIY: Awesome Iris Lamp Has Aperture That Opens & Closes As Light Is Turned On Or Off

« Drone Captures A $24 Million Yacht Burns To Ashes
Leaked: Our First Look at the Nikon D810 »