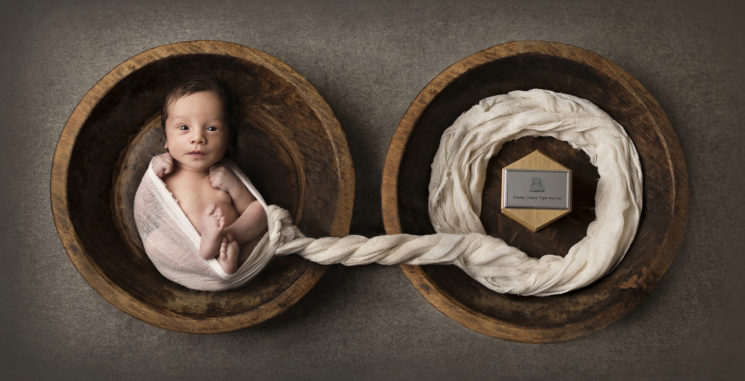 Among hundreds of photos I scroll through every day, it doesn’t happen often that one image captures all my attention and sends shivers down my spine. But a powerful photo of Wellington-based photographer Sarah Simmons managed to do it.

She captured the twins’ connection, the celebration of life a heart-wrenching grief in a single photo. And this is the image that won Portrait Masters contest among 7,000 other entries.

The mother, Cherie Ayrton, was carrying twin boys, and one of them died in the womb at five months. But despite the loss and grief, Cherie wanted to go ahead with her scheduled newborn photo shoot. And Sarah created the impactful image of newborn baby Tiger and the ashes of his twin brother Johnny.

It was Sarah’s idea to wrap up baby Tiger in a cloth and use it to connect him with the ashes of his twin brother. The cloth was arranged in a way that it symbolizes an umbilical cord. And while the photo shoot was very emotional and certainly wasn’t easy, Sarah managed to create a photo that isn’t only technically fantastic, but it’s also incredibly moving.

Sarah says that this became her favorite photo and that it means a lot to her. She submitted it to the Portrait Masters contest and it won the newborn category. “The judge described it as a beautiful celebration of life,” Sarah told Stuff. And I can only agree with that. I think Sarah’s image is a celebration of life, even though it’s sad at the same time. And I think that it can cause the viewer to feel a whole range of emotions, which is what makes it so impactful.

Time Of War Is An Epic Body And Ashes Series [NSFW]