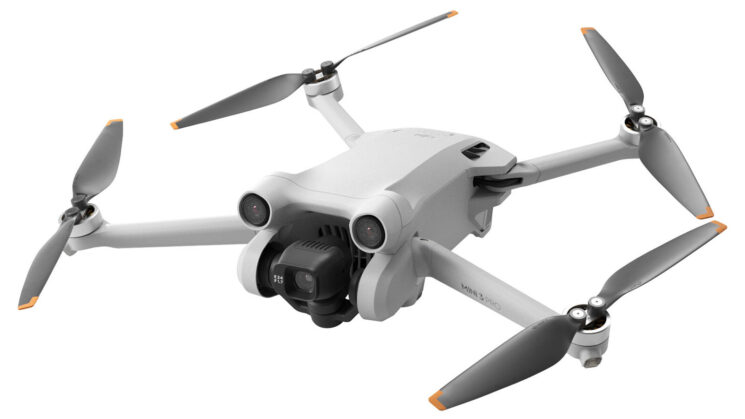 DJI has now officially announced the successor to their <250g DJI Mini 2. And in what will come as a surprise to absolutely nobody, it’s called the DJI Mini 3… Pro. I’m not sure what makes this “Pro” or if there’ll be a non-pro version coming at some point (perhaps as a successor to the Mini SE?), but DJI’s announcement today doesn’t actually reveal much that hadn’t already been leaked over the last couple of weeks – including a complete unboxing and first flight.

It’s another <250g drone with a larger battery option for those with the appropriate permits to fly larger drones, it comes in three different packages and the Fly More Combo deal is an extra addon to each of those three packages. And despite any other advancements DJI may have made with this drone, the big news, obviously, is that their Mini line finally has obstacle avoidance.

The DJI Mini 3 takes some design cues from its larger sibling, the Mavic 3, rather than its predecessor. As a result, it offers some new features, like the ability to tilt the camera from -90° (pointing straight down) to +60°, two-thirds of the way to straight up. Being able to look up, especially without getting the blades in the shot, is a neat trick for any drone, but especially one of this size.

When it comes to the camera, it’s a 1/1.3″ CMOS chip with 48-megapixels of resolution. The lens offers a field of view of 82.1° (equivalent ot 24mm on a full-frame camera) with a maximum aperture of f/1.7 that has everything from 1 metre to infinity in focus. It also shoots 4K video at up to 60 frames per second, and you can shoot 120fps slow motion at 1080p HD resolution. QuickShot modes include the usual Dronie, Rocket, Circle, Spiral, Asteroid and Boomerang. It also offers true vertical shooting for you TikTokers and Stories addicts!

It has a top speed of 16 metres per second (~35.8mph) in sport mode, with a maximum flight altitude of 4,000 metres. This doesn’t mean you’ll necessarily be able to take it 4,000 metres from where you start. It’ll still have those altitude caps, but it means you can take off from a starting altitude of up to 4,000 metres – but if you’re already up there, you won’t be able to keep going up, only down.

It boasts 35-minutes of flight time on the standard battery (the one that keeps it below 250g) with a maximum flight distance of 18 kilometres (a little over 11 miles) with level five wind resistance (29-38km/h or 18-23.5mph). It has 802.11 a/b/g/n/ac WiFi and Bluetooth 5.2 with GPS, Galileo and BeiDou navigation systems. It also has a 3-way obstacle avoidance system looking at the front, rear and downward.

You get up to 7.5 miles of video transmission with OcuSync 3 and latency of approximately 120 milliseconds (0.12 seconds), although it’ll get pretty weak at that maximum range. While you’re watching, though, you’ll get the FocusTrack Subject Tracking System, too, letting you have your drone follow you or another subject while it films. And if you’re using the new RJI RC Controller, you wont’ even need to take your phone out of your pocket – although it looks a little awkward to use without your hands getting in the way of the display.

The only thing that’s really new today is the US price – which is significantly increased over the Mini 2. So, here goes. The DJI Mini 3 is available to pre-order now standalone for $699, with the RC-N1 controller for $759 or with the DJI RC Controller for $909. It’s expected to start shipping “soon”.