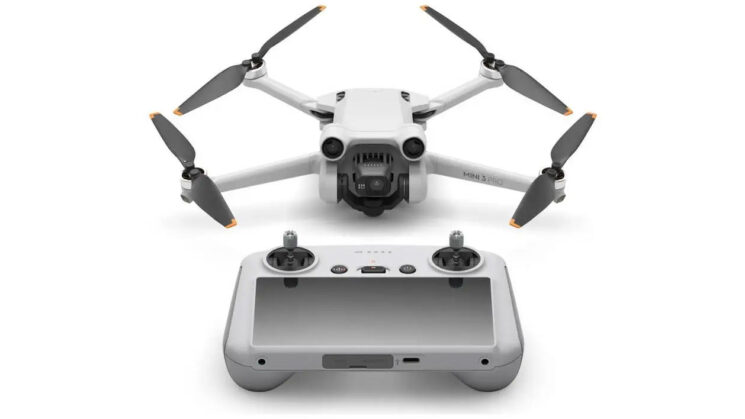 There’s supposed to be a teaser announced later today and the official announcement is expected on May 10th, but the complete specs for DJI’s upcoming Mini 3 Pro drone have leaked, confirming that it has a 48-megapixel 1/1.3″ CMOS sensor capable of shooting 4K HDR video. It has a top speed of 34 minutes (on the standard battery) with level five wind resistance.

It has a top flight speed of 16 metres per second (~35.8mph) and a maximum flying height of 4,000 metres (~13,100 feet) and a maximum flight distance of 18km. Of course, that maximum height and distance are still governed by your local regulations. The leak, not surprisingly, comes via Jasper Ellens (otherwise known as 27 Leaks) who’s leaked much of the Mini 3 Pro information so far. 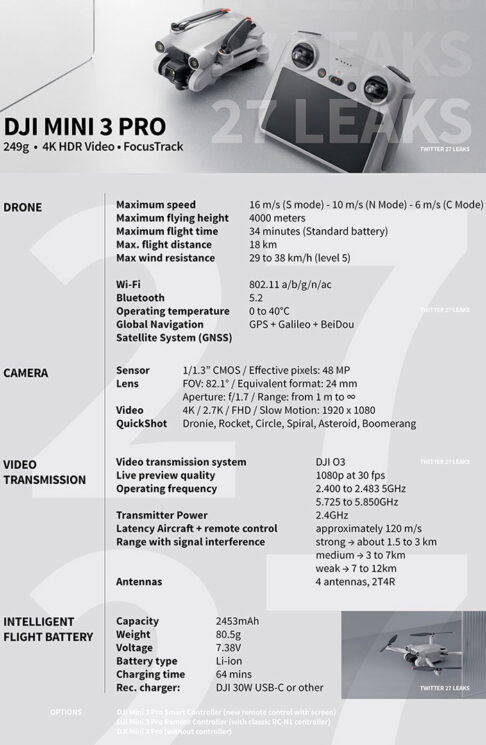 It’s rumoured that the 48-megapixels a quad Bayer, similar to that found in smartphones. So you’re really getting a 12-megapixel result much of the time. If the drone is indeed capable of shooting 48-megapixel photos, I wonder if it’ll be the actual raw data without the quad Bayering stuff, as you typically get with Android devices when shooting DNG raw, or if it’ll be scaled up like it is with the Autel Evo Nano (review here) which claims 48-megapixels, but can only do it in jpg mode and is upsampled from 12-megapixels (that doesn’t look as good as upsampling yourself from a 12-megapixel DNG raw in Photoshop).

Whether the DJI Mini 3 Pro’s 48-megapixels work the same way as Autel’s or not, DJI certainly looks to have the Evo Nano and Evo Nano+ beaten on price. Leaked prices so far only seem to confirm Euros, but I would expect US dollar prices to be quite similar numbers to those found in the EU.

It’s interesting that the “Fly More Kit” seems to be an added extra onto each drone package rather than a whole set of separate bundles. I wonder if this means you can upgrade to the “Fly More” combo in the future after you’ve bought your drone instead of having to pay full price for all the extras individually. That seems logical, of course, DJI could just have it available as an optional extra for new purchases only.

I guess we’ll find out in just a few more days!

« Photographer who charges more for plus-sized models sues for defamation
The new Sigma HQ has a library, a rooftop garden and a “lens cellar” »