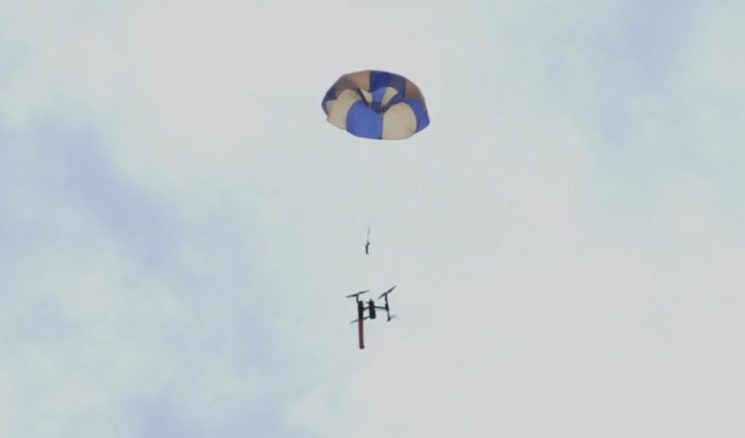 In most cases, commercial and personal drones aren’t allowed to fly over crowds of people for safety reasons. You never know when a drone might crash and hurt someone, so it sounds reasonable. However, Indemnis’ drone parachute lets you legally fly drones over small groups of people. It’s the first time a drone parachute receives certification that allows drone operators to fly over crowds.

As you might know, there are other drone parachutes available on the market, such as Fruity Chutes and Parazero. However, the Indemnis Nexus system is, for now, the only one validated as compliant with the new international standard for drone parachutes. It’s made for the DJI Inspire 2, but the company plans to offer it for Matrice 200 and Matrice 600 series by late 2019.

As I mentioned, FAA prohibits drones flying directly over people in most cases. There are exceptions, though, if you can apply for a waiver from that restriction. But, you must prove that you have strict safety mitigations in place (or you have to work for CNN, I guess). sUAS News explains that the Indemnis system is “intended to be the core of a parachute-based safety mitigation plan for a waiver, and can also help provide one path forward for advanced operations as the FAA considers how to allow routine flights directly over people.”

The Indemnis Nexus system is triggered automatically as it detects any abnormal tilting or falling of a drone. It deploys the parachute within 30 milliseconds at 90 mph, through a tube that rapidly inflates to keep the parachute lines away from the drone body and propellers. The system went through a series of tests conducted in different failure scenarios. After successful tests, it was confirmed to provide safe flights to drones.

Brendan Schulman of DJI believes that the certification of the Nexus system “is a significant step toward making flight over people and crowds routine, expanding the scope of vital applications such as search and rescue, newsgathering, and public safety.” Also, I believe it would make it easier for professional drone operators to be granted permission for flying over groups of people for other purposes, too. It could make it easier to film concerts, sports events, and other gatherings, as well as movies and music videos.